Feed or fight? How a honey bee hive’s culture influences their choice

3-Jan-2023 11:05 AM EST, by Society for Integrative and Comparative Biology (SICB)
favorite_border 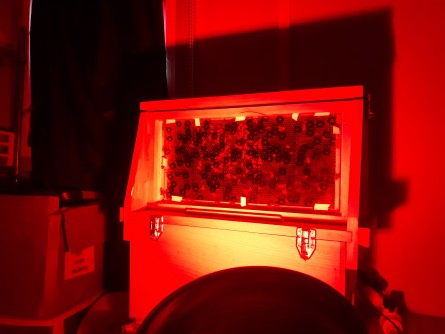 Observation hives allow researchers to watch for changes in nest behavior following the introduction of a stimulus that incites aggression outside the hive. Red light is used as bees cannot see red and so behave as if they're still in the dark.

Newswise — Full of needy young, a queen, and constantly under threat of attack, the honey bee hive is complex and fascinating. For decades, researchers have studied the intricacies of the hive as a model for how individual behaviors make up the “social environment” and how that reinforces and shapes the future of the colony.

Rebecca Westwick, a doctoral candidate at University of Kentucky, studies how the social environment can influence developing young by studying the adults that tend to them. Westwick is presenting her results at the Society for Integrative and Comparative Biology’s Annual Meeting in January 2023 in Austin, Texas.

To maintain a productive hive, bees must split up many tasks. Those that begin as “nurses” who manage and feed the young later become “foragers” who gather and return with food for the hive. When a threat to the hive triggers bees to emit alarm pheromone (a chemical that encourages bees to attack), the foragers act as the frontline of defense.

Previous work by Westwick’s advisor, Assistant Professor Clare Rittschof, showed that the extent to which foragers respond to an attack is influenced by the colony in which they’re raised as larvae, not by their genes. For Westwick, this sparked a question, “How does a honey bee larva know what social environment it’s in, in a way that changes its behavior as an adult?”

To understand how nurses might be influencing the larvae, she observed nurse behavior in 12 honey bee colonies at the University of Kentucky’s Spindletop Farm. Of these 12, half were classified as high and half as low aggression based on their response to alarm pheromone. By observing the colony innerworkings using an observation nest while waving alarm pheromone outside the hive, she was able to observe how nurse bees responded to this simulated colony threat.

She found that nurses from high-aggression colonies would stop their care when sensing alarm pheromone, whereas nurses from low-aggression colonies would continue their care duties. Westwick’s findings suggest that nurse behavior may largely be the way that larvae understand their social environment and later go on to perform similar behaviors as adult nurses or perhaps be more aggressive as foragers.

For Westwick, the next steps in this work are to test whether a simulated interrupted feeding schedule produces adult nurses that act similarly when sensing alarm pheromone. She suspects that disruptions in the feeding schedule create an uncertain environment for the larvae. “This larva might then sense that it would be better prepared for that uncertain world if it is more aggressive and therefore better able to defend itself,” she adds. By testing how the nurses in the hive respond to alarm pheromone, Westwick’s findings illuminate how changes in early care may be key to adult behavior.