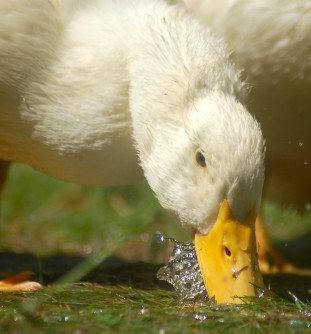 Domestic ducks (pictured), like their wild ancestors, rely on their acutely mechanosensitive bill for foraging. The glabrous skin of the duck bill has numerous acutely sensitive mechanoreceptors, which can help elucidate the molecular basis of the sense of touch.

Newswise — WASHINGTON, D.C., February 11, 2015 -- When we reach out to touch something, our nervous system converts the mechanical input from our fingers contacting an object into an electrical signal in the brain. The process, known as mechanosensation, is one of our fundamental physiological processes, on par with sight and smell. But how it works on a cellular level remains poorly understood, holding back development of effective treatments for mechanosensory disorders like chronic pain.

Now, a team of researchers from the Yale University School of Medicine has identified a new model organism that may help elucidate the cellular mechanisms behind mechanosensation: the ordinary duck. Their results, first published in PNAS in October 2014, will be presented during a poster session at the 59th meeting of the Biophysical Society, held Feb. 7-11 in Baltimore, Maryland.

Touch has historically been complicated to study because what we experience as a single sensation is actually a more complex suite of stimuli. In many organisms, receptors for different components -- such as pressure, temperature and pain -- are intermixed, making it difficult to isolate the influence of any individual component.

That's where the duck comes in. Ducks rely on their bills to look for food in murky water instead of searching visually. This means that their bills are highly sensitive to light touch that would indicate the presence of a potential food source, but less sensitive to co-occurring sensations like temperature. Their sensory specialization makes them an ideal system in which to isolate the cellular workings of light touch sensation. "Our rationale was to look at an animal that had taken the ability to sense light touch to the extreme," said lead researcher Sviatoslav Bagriantsev.

The researchers focused on nerves extending from the trigeminal ganglion, a cluster of sensory neurons in the brain. The trigeminal neurons project from this region to sensory organs on the duck's bill. Bagriantsev and his team's findings suggest a relationship between the touch sensitivity of an animal and the role of these neurons. In most birds and mammals, the majority of trigeminal neurons are devoted to temperature and pain perception. On the other hand, an overwhelming proportion of trigeminal neurons in ducks are specialized for light touch sensation. The unusual pattern observed in the ducks matches that found in star-nosed moles -- strange-looking blind mammals that have specialized mechanosensory organs on their face to help them navigate in the darkness.

But ducks didn't just have more neurons devoted to detecting physical force in their bills. The neurons they had actually functioned more efficiently, displaying a much stronger response to a light touch than the corresponding neurons in most other birds and mammals would. "In the absence of all other components of the skin, the [duck bill] neurons alone are capable of converting force into excitation much more efficiently than in a mouse," said Bagriantsev.

These results demonstrate that although mechanosensation is a complex process involving many body systems, it is strongly influenced by intrinsic neuron-level differences. "The somatosensory neurons themselves define how acutely one can sense touch," said Bagriantsev. "From the many, many components out there, we've singled out one -- the somatosensory neurons -- that we think contributes the most to the ability of the animal to detect minute physical forces."

Having established a cellular basis for the behavior, the researchers are now zooming in further to determine what's happening on the molecular level—which particular proteins might be involved in mediating the duck's extremely strong sense of touch.

One promising candidate is an ion channel called Piezo2, which has also been shown to influence mechanosensation in mice. It's present at low levels in visual food-foragers like chickens, as well as in duck neurons not connected to the beak's sensory system. But the vast majority of duck trigeminal ganglion neurons express the channel, suggesting that it may contribute to specialized touch sensation.

However, Bagriantsev emphasized that Piezo2 is likely not the full story. "Piezo2 in mice generates fast-decaying currents—the channel opens, then closes quickly. But what we see in this duck is that the current persists and the channels stay open," he explained. "That means either that duck Piezo2 is significantly different from mouse, or that duck neurons have other mechanosensitive ion channels."

The exact proteins responsible for mechanosensitivity in birds and vertebrates in general have only started to emerge, and many more remain to be identified. But because the duck bill contains such a large population of specialized, highly responsive neurons, Bagriantsev and his team believe that this common waterfowl could be a promising model organism for advancing molecular and cellular level understanding of touch.

Basic sensation research like this can have long-term payout in addressing mechanosensory disorders such as neuralgias, chronic pain and mechanical allodynia, where a light touch feels incredibly painful. Current treatments for these conditions alleviate symptoms but do not generally address the underlying problem. Identifying molecular and cellular level targets, as Bagriantsev and his team have done, could eventually help researchers to develop more effective drugs. "Our research will, in the long run, contribute to finding treatment for chronic pain-associated disorders," said Bagriantsev.