Atherosclerosis is the foremost cause of coronary artery disease, the number one killer of people in the United States.

In atherosclerosis, plaque builds in arteries behind the inner lining, or epithelium, in a process involving inflammation and immune reaction complications. 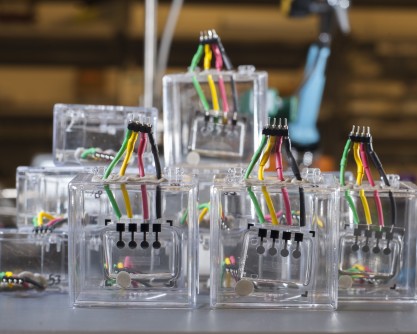 Microfluidic chips will contain artificial human coronary arteries for highly reproducible experiments with engineered HDL. Shown here are microvessel mimicking chips, which are very similar. The arterial chips are being developed for the new research. 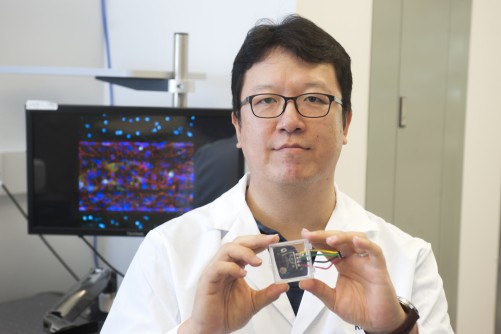 A human-coronary-artery-on-a-chip will be used in Tony Kim's research shown here with magnified endothelial cells. Shown here are epithelial cells in a similar microvessel mimicking chip. The new arterial chips are currently being developed for the new research. 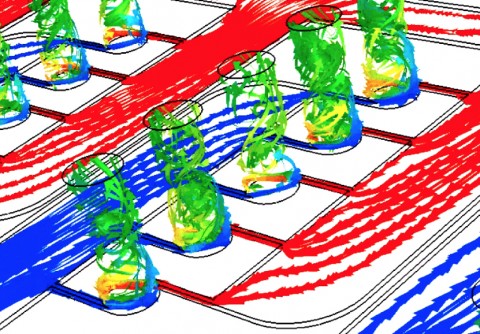 High-throughput production of protein nanoparticles, illustrated here, allows for highly reproducible experiments and also the productive standardized assembly of nanoparticles that may prove to be good drug candidates for clinical trials to treat atherosclerosis.

Newswise — Very many lives may someday depend on the work of researchers like Tony Kim. He’s fighting atherosclerosis, the foremost cause of coronary artery disease, which is America’s single greatest killer.

The National Institutes of Health has awarded Kim over $2.3 million in funding to boost his innovative research using life-mimicking laboratory chips to explore the treatment of atherosclerosis. No other health hazard appears more deadly, as the condition is also a key contributor to stroke, chronic kidney disease, peripheral artery disease, and carotid artery disease.

Known for its high prestige, the NIH Director’s New Innovator Award is one of four High-Risk, High-Reward awards given annually, which recognize promising new projects that address challenges in biomedical research of pressing importance to human health.

Everyone is at risk

We are all at risk for clogged arteries or hardening of the arteries, common terms for atherosclerosis.

If atherosclerosis is detected in time, bypass operations, drugs that lower bad cholesterol, and lifestyle changes can save lives. But many patients’ conditions worsen in spite of these, and there is a strong need for better treatment options.

Failures in clinical trials of new potential treatments that raise levels of “good cholesterol” have underscored the need for better understanding of the therapeutic role of good cholesterols known as high-density lipoprotein (HDL). They are the focus of the research for which Kim’s grant was awarded.

Recently, researchers have uncovered that good cholesterols are not always good. HDLs don’t work as they should in patients with coronary artery disease, and some HDLs even do bad things.

“Researchers tried raising HDLs levels in patients’ bloodstreams thinking patients’ conditions might improve, but the coronary artery disease did not get better,” said Kim, an assistant professor in the George W. Woodruff School of Mechanical Engineering at the Georgia Institute of Technology. “Also, high levels of HDLs in the bloodstream don’t always protect people from atherosclerosis.”

Kim is interested in HDLs’ hit-or-miss qualities in atherosclerosis patients, and in how inflammation leads to HDLs’ diminished effectiveness. Proinflammatory proteins in the bloodstream junk up good HDLs. “HDLs remake themselves all the time, and they can incorporate proinflammatory proteins, which disturb the traditional good cholesterol functions that HDL is known for,” Kim said.

The Kim group could better understand the mechanisms behind that, and also find ways to leverage these for treatments. His team may be able to identify some HDL cocktails that reduce atherosclerosis despite raised proinflammatory proteins levels in the bloodstream of patients with coronary artery disease or chronic kidney disease.

Kim’s proposed research that won the NIH award illuminates HDL interactions with proinflammatory proteins and with vascular tissues by mimicking some of them in the lab. Kim makes aspects of these interactions observable via a special slide called a human-coronary-artery-on-a-chip.

It’s a clear plastic chip with microfluidic passages lined with living arterial cells to form an artificial coronary artery. Inside the artificial arteries, Kim’s research group experiments with what are called engineered high-density lipoproteins (eHDLs), nanoparticles synthesized to be near faultless samples of specific HDLs.

Natural HDLs are often not as uniform in composition and size because of interactions with other proteins. On the other hand, Kim’s group can produce eHDLs with uniform properties, allowing for reliable experimental parameters. The eHDLs are highly reproducible, as are the experiments, the latter of which is essential in research for cementing trustworthy results.

This innovative microfluidic technology allows for the robust production of multicomponent nanomaterials in large quantities and varieties. As a result, Kim’s team can compile a comprehensive eHDL library with various functional proteins to see how they affect the artificial artery the way actual HDLs might in combination with inflammatory proteins affect real arteries in the body.

Once the in vitro chip experiments yield results, Kim’s research group will corroborate them in vivo in experiments on a mouse model of atherosclerosis in collaboration with cardiology engineering researcher Hanjoong Jo at Emory University School of Medicine.

The old explanation about how cholesterol gunk coats blood vessels like lard is not quite correct, but animal fats are involved in atherosclerosis. Here’s a brief description of how the disease clogs arteries.

So, lipoproteins, which are large collections of particular protein molecules, wrap around lipids, which include oily fats called triglycerides, to transport them through the bloodstream, which is water-based. Some lipoproteins, like the infamous low-density lipoproteins (LDLs), deliver lipids to cells, but HDLs pick them up from cells when it’s time for them to leave and take them to the liver for breakdown, a process called reverse cholesterol transport.

If there aren’t enough well-functioning HDLs in the bloodstream, reverse cholesterol transport can slow down, and the lipids amass in artery walls behind endothelial cells, which make up the lining inside of arteries.

As a result, lipids congregate in the arterial wall, along with immune cells that get stuck there, together forming plaque, which causes the arteries to narrow and constrict blood flow. The plaque can burst into the artery, clogging it even more.

A heart attack or stroke can result.

The name of the category of the NIH grant Kim received is High-Risk, High-Reward for a reason. The risk refers to a bold move into uncharted territory, according to the NIH.

The potential reward, in this case, could mean discovering new effective treatments against what appears to be the single deadliest killer of our times.

Kim sees high reward potential in the unique possibilities combining the human-organ-on-a-chip technology and the bioinspired nanotechnology provides. “You can’t do this type of work in vivo,” Kim said. “And the high reproducibility is very valuable to sort out truly good candidates for treatment trials.”

Should the experiments result in nailing down a drug candidate, Kim’s lab will leverage its high-throughput manufacturing method to produce ample substances with high consistency for drug testing.

And the high risk in his view?

“Even if we find HDLs with specific functions, they may not work in the same way in our bodies because of HDLs’ compositional and functional complexity. The body can still introduce unidentified proteins into the HDLs,” Kim said. “It’s always like that in human trials. Things we still don’t know about the body’s enormous biochemistry can get in the way.”

“Even so, the experiments may provide unprecedented insights into these complex nanoparticles and still move research forward toward better treatments. I think that, combined with all the engineering and scientific possibilities the work taps into, the high rewards dampen the potential risk.”

The NIH Director’s New Innovator Award covers five years of research funding and is given to a principal investigator who is in an early career stage and has never received a large-category NIH grant before.

Caption: Atherosclerosis is the foremost cause of coronary artery disease, the number one killer of people in the United States.

Caption: In atherosclerosis, plaque builds in arteries behind the inner lining, or epithelium, in a process involving inflammation and immune reaction complications. 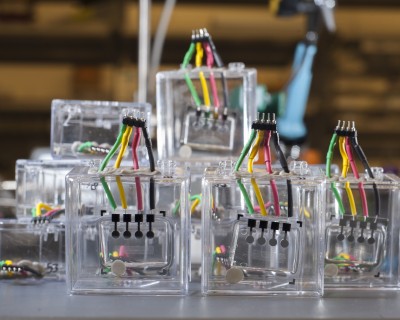 Caption: Microfluidic chips will contain artificial human coronary arteries for highly reproducible experiments with engineered HDL. Shown here are microvessel mimicking chips, which are very similar. The arterial chips are being developed for the new research. 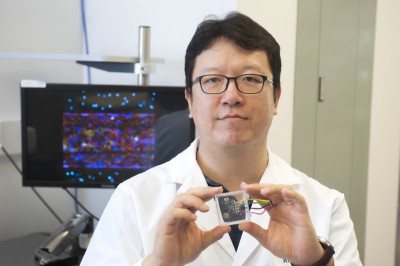 Caption: A human-coronary-artery-on-a-chip will be used in Tony Kim's research shown here with magnified endothelial cells. Shown here are epithelial cells in a similar microvessel mimicking chip. The new arterial chips are currently being developed for the new research. 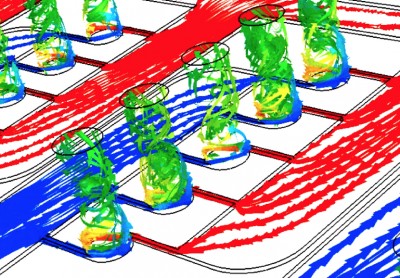 Caption: High-throughput production of protein nanoparticles, illustrated here, allows for highly reproducible experiments and also the productive standardized assembly of nanoparticles that may prove to be good drug candidates for clinical trials to treat atherosclerosis.