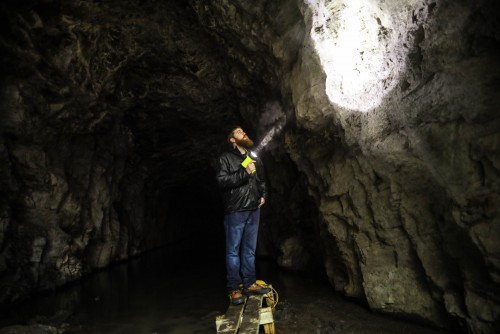 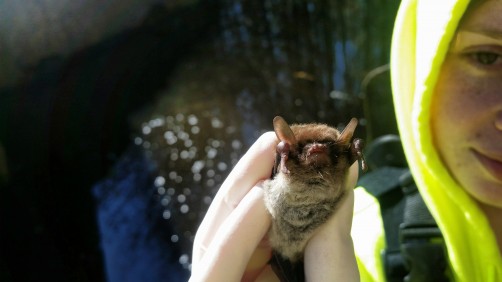 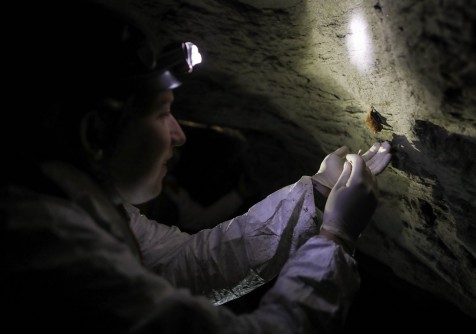 Newswise — North American bats, crucial to our ecosystems, are dying in unprecedented numbers, and their rapid decline – and the invasive microorganism killing these fragile mammals – has drawn the attention of researchers in Kennesaw State’s BioInnovation Lab.

White-nose syndrome, which appears as a white powdery substance on bats’ muzzles, is caused by Pseudogymnoascus destructans, a fungus that invades and deteriorates the delicate skin of hibernating bats, including their wings. This disease-causing fungus is not native to North America but was first introduced 12 years ago and has slowly made its way across the U.S. and Canada.

“I was so bothered when I first learned that a mammal was dying, at an unsustainable rate, from a fungal disease,” said Christopher Cornelison, a microbiologist and head of the BioInnovation Lab in KSU’s Office of Research. The notion that a fungus could likely lead to bats’ extinction was motivation for Cornelison to begin research in this field several years ago.

Today, Kennesaw State researchers are working to find a solution and have created innovative technologies to save them.

“Preserving bats is important because it preserves biodiversity,” said Kyle Gabriel, a postdoctoral researcher in KSU’s BioInnovation Lab working alongside Cornelison. “They enable us to have low-cost food because fewer pesticides are needed.”

Cornelison and Gabriel’s team of graduate and undergraduate biology and chemistry students evaluate logistical challenges and investigate methods to best treat bats in the wild. Their efforts are focused on fumigation strategies.

“The biggest challenge that we face is that while scientists may find some remedy that works against the pathogen, logistically how can we deliver that to a bat on a cave ceiling 50 feet high?” Cornelison asked.

Through support by The Conservation Fund in partnership with the Georgia Department of Natural Resources, Gabriel created a working prototype that could autonomously disperse anti-fungal fumigates inside a hibernaculum – a gathering spot for hibernating bats – and reach the bats high along the cave walls. The device is programmed to dispense an antifungal fluid at intermittent intervals. The liquid solution, which suppresses the fungal growth to reduce disease severity, turns to a fine aerosol when run through the atomizer and easily evaporates to permeate all spaces inside the hibernaculum.

“The benefit to this system is that we can treat an entire colony of bats in a very short period and with a minimal amount of labor,” Gabriel said.

Now in its second year, the embedded technologies were tested last fall with three treatments performed at a single hibernaculum in North Georgia. The Black Diamond Tunnel site, located in Rabun County, is the largest in the state, and its deep interior can only be reached by boat. A recent survey by state wildlife officials inside this specific site found a slight rise in the bat population, giving encouragement to the KSU research team.

In addition to these strategies to wipe out the disease, KSU researchers are also conducting the state’s first full study on Georgia’s bat habitats by surveying bat populations along the state’s roadways.

KSU graduate student Kelly Lutsch leads the research and has spent many of her weekends this winter crawling under bridges and trudging into culverts to survey for hibernating bats. A trained bat technician, her interest in white-nose syndrome drew her to Kennesaw State for the graduate biology program and to work alongside Cornelison.

With a $30,000 grant from the U.S. Fish and Wildlife Service and the Wildlife Management Institute, the team identifies bat species, counts them and evaluates the prevalence of white-nose syndrome within transportation infrastructures along the state’s major routes, including Interstate 75, I-95 and I-16.

“With 16 bat species in Georgia, we are counting them and looking for fungal presence and its burden on the colony,” said Lutsch, who previously worked for the Department of Natural Resources Wildlife Management division.

The team has examined more than 500 culverts to date, and the findings are significant. Transportation infrastructure may prove to be a viable transmission corridor in Georgia for the spread of white-nose syndrome, Lutsch explained.

“This is completely novel data,” she said. “Cave formations are ideal for bats, but there aren’t very many of those in South Georgia, and with the decline in longleaf pine trees, there aren’t many other habitats in Georgia conducive for bats.”

The researchers enter the roadway tunnels and, without disturbing a hibernating colony, quickly identify the species, look for obvious signs of white-nose syndrome and carefully collect samples from the bats, if within reach, or the walls to check for fungal spores and determine its prevalence at that particular site.

“In one culvert, I kept hearing the bats, but I couldn’t see them,” Lutsch said, explaining that bats make a chirping noise when stressed. She walked back in three times and suddenly discovered a crevice, stretching like a rainbow over her head, with 30 delicate faces peering at her.

Through these innovative research projects, Cornelison and his team are helping state and federal agencies further understand how the fungus that causes white-nose syndrome is spread and how best to inhibit its proliferation in North American bat populations.