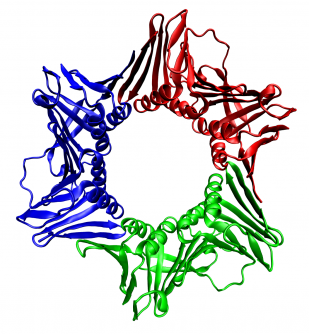 PCNA, shown above, is a protein essential to DNA repair and replication, and City of Hope researchers are targeting it in neuroblastoma cells in order to halt tumor growth and induce cell death.

Newswise — Neuroblastoma is one of the deadliest childhood cancers, accounting for 15 percent of pediatric cancer deaths. For patients with high-risk neuroblastomas, the five-year survival rate is 40 to 50 percent even with the most rigorous treatments available today.

But those odds may improve soon, thanks to a new compound developed by City of Hope scientists. The compound — a peptide called R9-caPep — works by targeting and disrupting proliferating cell nuclear antigens (PCNA), proteins that are essential in DNA synthesis, replication and repair.

The findings were published in PLoS ONE on April 11.

"We have previously reported identifying a subset of PCNAs that are expressed only in cancer cells," said Long Gu, Ph.D., assistant research professor in City of Hope's Department of Molecular and Cellular Biology and first author of the paper. "So we wanted to see if it's possible to single out and inhibit these cancer-associated PCNAs with this peptide, which would mean it's possible to deliver targeted therapy to malignant cells while leaving normal tissues unharmed."

In the study, Gu and his colleagues built R9-caPep to correspond to cancer-associated PCNAs. They then applied it to several neuroblastoma cell cultures. In their observations, they noted that R9-caPep successfully blocked PCNA actions in neuroblastoma cells with much less toxicity in noncancerous cells.

R9-caPep's interference with PCNA in cancer cells led to inhibition of their DNA replication and repair abilities, as well as inducing cell death. R9-caPep also made the neuroblastoma cells more sensitive to cisplatin, a cancer drug that works by damaging DNA.

These findings were further confirmed with animal trials. In this part of the study, Gu's team found that mice who were administered R9-caPep had almost no tumor growth, whereas the tumors in the control groups nearly tripled in volume and approximately doubled in mass over 25 days.

Additionally, the researchers found that R9-caPep was particularly effective on cancer cells with an amplified MYCN gene, which is linked to more aggressive and higher-risk neuroblastomas.

Given these promising findings, Gu and his team are currently conducting further studies to determine how R9-caPep disrupts DNA replication and repair in neuroblastoma cells. They will also be testing this and other peptides' therapeutic potential on breast, lung and pancreatic cancer cells.

Research reported in this publication was supported by the National Institutes of Health under grant numbers R01CA121289, R01CA120954 and P30CA33572. The content is solely the responsibility of the authors and does not necessarily represent the official views of the National Institutes of Health.Additional support for this research came from the Department of Defense (grant no. W91XWH-11-1-0786), St. Baldrick's Foundation and the ANNA Fund.