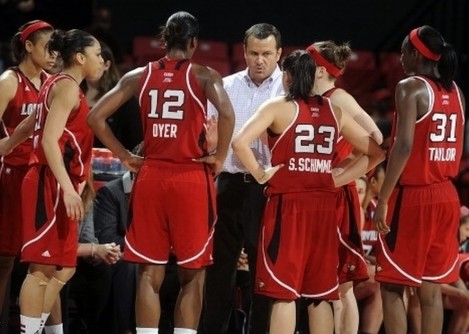 University of Louisville Women’s Basketball Coach Jeff Walz led his team to the Final Four this year. Walz will walk the red carpet at The Julep Ball on May 2.

The premier Derby Eve Party with a Purpose, The Julep Ball is held annually on the evening before the Kentucky Derby and supports the work of the James Graham Brown Cancer Center at the University of Louisville. The event on May 2 at the KFC Yum! Center kicks off with a 6:30 p.m. cocktail reception, followed by dinner and a live auction at 8 p.m.

An Official Event of the 140th Kentucky Derby®, The Julep Ball provides a celebrity-studded night to remember with a multi-course seated dinner, a knock-your-socks-off auction, multiple open specialty bars, complimentary valet parking, and dancing until the wee hours of Derby morning. Tickets to The Julep Ball sell out early each year. The full evening’s entertainment is $600 per person, $5,000 for a table of 10, and $100 per person for dance-only tickets. For further information and to buy tickets, go to The Julep Ball website, julepball.org.

About Jeff WalzConsidered by many to be the best young coach in women's basketball, Jeff Walz has made a career out of building successful programs. Walz has lived up to that reputation since taking over the helm at Louisville, taking the program to new heights. In his first six seasons, he has guided the Cardinals to two Final Four appearances and National Runner-up finishes in 2009 and 2013 along with four Sweet 16 appearances.

Walz's success can be traced back to recruiting. He is known as a tireless recruiter and has not let up since becoming a head coach. In just his first season, Walz and his staff brought in the highest ranked recruiting class in Cardinal history. He has since followed it up with three consecutive Top 10 classes, with the 2010 class ranked fifth in the nation. The 2011 class made school history with two McDonald's All-Americans.

He was named the sixth head coach at the University Louisville on March 27, 2007. Walz, a Kentucky native, returned to the bluegrass state after serving as an associate head coach at Maryland.

In the 2012-2013 season, Walz led the Cardinals to the biggest upset in women's basketball history by defeating the No. 1 overall seed Baylor in the Sweet 16 of the NCAA Tournament. The Cardinals went on to defeat the No. 2 seeded Tennessee Lady Vols in the Elite Eight to reach their second Final Four appearance in four years.

Louisville went on to defeat No. 2 seed California in the national semifinal, advancing to the National Championship for the second time in Walz's career as a head coach. Entering the NCAA Tournament the Cardinals were ranked No. 16 but finished the year ranked third with a 29-9 overall record and another miraculous run in the NCAA Tournament.

During the 2012 season Walz had his most talented team in four seasons but lost two of his top three scorers early in the season. Despite the adversity, Walz led the team to a 23-10 record. The Cardinals advanced to the second round of the NCAA Tournament and ended the season with a final ranking of 16th in the nation.

Walz began his coaching career at the middle and high school levels in 1992 and was an AAU coach in 1995-96. During his career, he has guided such players as 1996 National High School Player of the Year Jaime Walz, his sister, who now coaches the girls' high school team at their alma mater, Highlands High School. He also coached 1999 NCAA champion and WNBA standout Ukari Figgs, the University of Tennessee's Kyra Elzy, and Ohio State standout Louisville native, Marita Porter.

He attended Northern Kentucky University on a basketball scholarship, graduating with a bachelor of science in secondary education in May 1995. Walz earned his master's in education in August of 1997 from Western Kentucky.

Walz has three children, daughter Kaeley, son Jacob, and daughter Lola. He married to the former Lauren Lueders and the couple reside in Louisville.

About the James Graham Brown Cancer Center:The James Graham Brown Cancer Center is a key component of the University of Louisville Health Sciences Center. As part of the region's leading academic, research and teaching health center, the cancer center provides the latest medical advances to patients, often long before they become available in non-teaching settings. The JGBCC is a part of KentuckyOne Health and is affiliated with the Kentucky Cancer Program. It is the only cancer center in the region to use a unified approach to cancer care, with multidisciplinary teams of physicians working together to guide patients through diagnosis, treatment and recovery. For more information, visit our web site, www.browncancercenter.org.