Physicists have tracked a quantum system’s wanderings through quantum state space, a feat once considered impossible 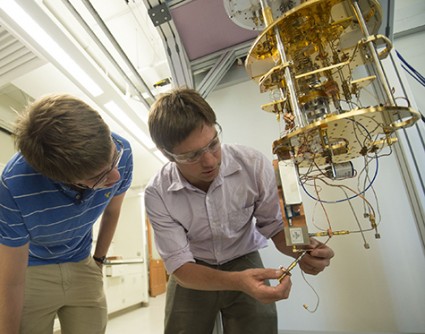 Kater Murch (right), assistant professor of physics at Washington University in St. Louis, and junior Chris Munley work with the equipment that can map a quantum device's trajectory between two points in quantum state space, a feat until recently considered impossible. 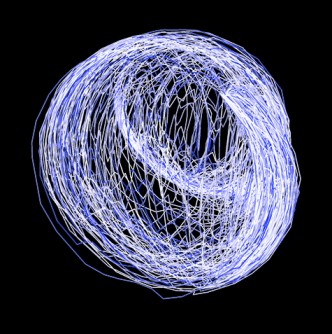 A path of desire, or preferred trajectory, emerges from many trajectories between two points in quantum state space. 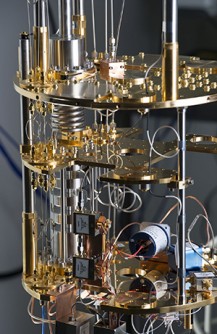 The superconducting circuit used as a model quantum system in Murch’s lab is bolted to a stage in a dilution refrigerator (pictured above), which holds it at a temperature of 7 milliKelvin, or just a hair’s breadth above absolute zero. With thermal noise suppressed to this level, the device enters quantum space.

Newswise — Groundskeepers and landscapers hate them, but there is no fighting them. Called desire paths, social trails or goat tracks, they are the unofficial shortcuts people create between two locations when the purpose-built path doesn’t take them where they want to go.

There’s a similar concept in classical physics called the “path of least action.” If you throw a softball to a friend, the ball traces a parabola through space. It doesn’t follow a serpentine path or loop the loop because those paths have higher "actions" than the true path.

But what paths do quantum particles, such as atoms or photons, follow? For these particles, the laws of classical physics cease to apply, and quantum physics and its counterintuitive effects takes over.

Quantum particles can exist in a superposition of states, yet as soon as quantum particles are "touched" by the outside world, they lose this quantum strangeness and collapse to a classically permitted state. Because of this evasiveness, it wasn’t possible until recently to observe them in their quantum state.

But in the past 20 years, physicists have devised devices that isolate quantum systems from the environment and allow them to be probed so gently that they don’t immediately collapse. With these devices, scientists can at long last follow quantum systems into quantum territory, or state space.

Kater Murch, PhD, an assistant professor of physics at Washington University in St. Louis, and collaborators Steven Weber and Irfan Siddiqui of the Quantum Nanoelectronics Laboratory at the University of California, Berkeley, have used a superconducting quantum device to continuously record the tremulous paths a quantum system took between a superposition of states to one of two classically permitted states.

Because even gentle probing makes each quantum trajectory noisy, Murch’s team repeated the experiment a million times and examined which paths were most common. The quantum equivalent of the classical “least action” path — or the quantum device’s path of desire — emerged from the resulting cobweb of many paths, just as pedestrian desire paths gradually emerge after new sod is laid.

The experiments, the first continuous measurements of the trajectories of a quantum system between two points, are described in the cover article of the July 31 issue of Nature.

“We are working with the simplest possible quantum system,” Murch said. “But the understanding of quantum interactions we are gaining might eventually be useful for the quantum control of biological and chemical systems.

“Chemistry at its most basic level is described by quantum mechanics,” he said. “In the past 20 years, chemists have developed a technique called quantum control, where shaped laser pulses are used to drive chemical reactions — that is, to drive them between two quantum states. The chemists control the quantum field from the laser, and that field controls the dynamics of a reaction,” he said.

“Eventually, we’ll be able to control the dynamics of chemical reactions with lasers instead of just mixing reactant 1 with reactant 2 and letting the reaction evolve on its own,” he said.

Between these two states, there are an infinite number of quantum states that are superpositions, or combinations, of the ground and excited states. In the past, these states would have been invisible to physicists because attempts to measure them would have caused the system to immediately collapse.

But Murch’s device allows the system’s state to be probed many times before it becomes an effectively classical system. The quantum state of the circuit is detected by putting it inside a microwave box. A very small number of microwave photons are sent into the box where their quantum fields interact with the superconducting circuit.

The microwaves are so far off resonance with the circuit that they cannot drive it between its ground and its excited state. So instead of being absorbed, they leave the box bearing information about the quantum system in the form of a phase shift (the position of the troughs and peaks of the photons’ wavefunctions).

Although there is information about the quantum system in the exiting microwaves, it is only a small amount of information.

“Every time we nudge the system, something different happens,” Murch said. “That’s because the photons we use to measure the quantum system are quantum mechanical as well and exhibit quantum fluctuations. So it takes many of these measurements to distinguish the system’s signal from the quantum fluctuations of the photons probing it.” Or, as physicists put it, these are weak measurements.

Murch compares these experiments to soccer matches, which are ultimately experiments to determine which team is better. But because so few goals are scored in soccer, and these are often lucky shots, the less skilled team has a good chance of winning. Or as Murch might put it, one soccer match is such a weak measurement of a team’s skill that it can’t be used to draw a statistically reliable conclusion about which team is more skilled.

Each time a team scores a goal, it becomes somewhat more likely that that team is the better team, but the teams would have to play many games or play for a very long time to know for sure. These fluctuations are what make soccer matches so exciting.

Murch is in essence able to observe millions of these matches, and from all the matches where team B wins, he can determine the most likely way a game that ends with a victory for team B will develop.

A line of desireSo what is the most likely path for a quantum system slowly collapsing from a superposition of states to one of two final states?

“Before we started this experiment,” Murch said, “ I asked everybody in the lab what they thought the most likely path between quantum states would be. I drew a couple of options on the board: a straight line, a convex curve, a concave curve, a squiggly line . . . I took a poll, and we all guessed different options. Here we were, a bunch of quantum experts, and we had absolutely no intuition about the most likely path.”

Andrew N. Jordan of the University of Rochester and his students Areeya Chantasri and Justin Dressel inspired the study by devising a theory to predict the likely path. Their theory predicted that a convex curve Murch had drawn on the white board would be the correct path.

“When we looked at the data, we saw that the theorists were right. Our very clever collaborators had devised a ‘principle of least action’ that works in the quantum case,” Murch said.

They had found the quantum system’s line of desire mathematically and by calculation before many microwave photons trampled out the path in Murch’s lab. 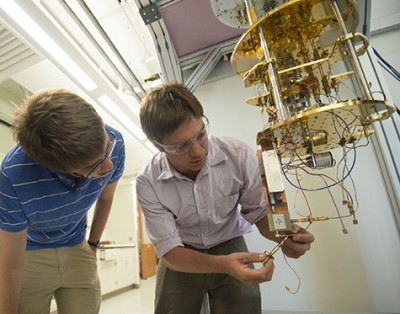 Caption: Kater Murch (right), assistant professor of physics at Washington University in St. Louis, and junior Chris Munley work with the equipment that can map a quantum device's trajectory between two points in quantum state space, a feat until recently considered impossible. 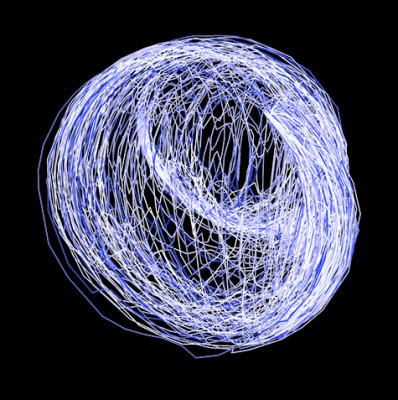 Caption: A path of desire, or preferred trajectory, emerges from many trajectories between two points in quantum state space. 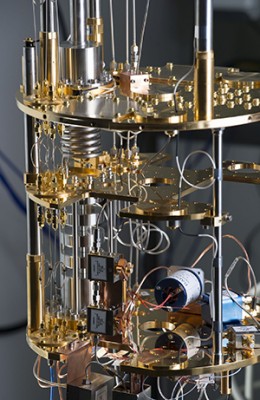 Caption: The superconducting circuit used as a model quantum system in Murch’s lab is bolted to a stage in a dilution refrigerator (pictured above), which holds it at a temperature of 7 milliKelvin, or just a hair’s breadth above absolute zero. With thermal noise suppressed to this level, the device enters quantum space.