Finding the Target: How Timing Is Critical in Establishing an Olfactory Wiring Map

3-Apr-2014 9:30 AM EDT, by Stowers Institute for Medical Research
favorite_border 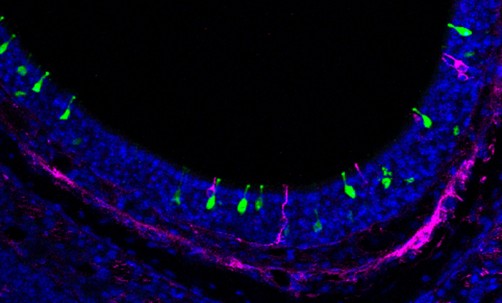 Newswise — KANSAS CITY, MO—The human nose expresses nearly 400 odorant receptors, which allow us to distinguish a large number of scents. In mice the number of odor receptors is closer to 1000. Each olfactory neuron displays only a single type of receptor and all neurons with the same receptors are connected to the same spot, a glomerulus, in the brain. This convergence, or wiring pattern, is often described as an olfactory map. The map is important because it serves as a code book for odorants that allows the brain to distinguish between food odors and the scent of a predator, among others.

Unlike photoreceptors in the retina or hair cells in the inner ear, which cannot be replaced once damaged, olfactory neurons have the unique capacity to regenerate throughout the life. More remarkably, the regenerated neurons must dispatch their axons on a path through the nasal epithelium to the brain through a distance a thousand times the length of the cell, where they make the proper connections. If regenerating neurons are mis-wired to different glomeruli, odor perception would be altered.

In the April 11, 2014 issue of Science, Associate Investigator C. Ron Yu, Ph.D. and colleagues at the Stowers Institute of Medical Research identify a developmental window during which olfactory neurons of newborn mice can form a proper wiring map. They show that if incorrect neuronal connections are maintained after this period, renewing cells will also be mis-wired.

Their results also hint at how the olfactory neurons connect to their targets. Although scientists can induce stem cells to become neurons, they know little about how to precisely steer them to make the proper connections. This work suggests additional targeting skills that stem cell-generated neurons need to acquire to repair the brain or spinal cord.

Previously, researchers thought that since olfactory neurons exhibited lifelong regeneration, they likewise retained the ability to re-establish correct connections. “We show that this is not the case,” says Yu. In the report, his team uses a number of transgenic mouse lines to demonstrate that the first week after birth is a critical window of time during which incorrect projections can be restored to normal. “If mis-targeting does not get corrected within this period, cells still regenerate but many get locked onto the wrong tracks.” Yu adds.

Neuronal wiring has intrigued Yu since he was a post-doc in the lab of Richard Axel, M.D., at Columbia University. Back then Yu created a genetically engineered mouse in which he could temporarily muffle the firing of olfactory neurons. He found that inactivating neurons caused them to connect to the wrong glomeruli. After joining the Stowers Institute in 2005, Yu began to wonder whether an incorrectly wired olfactory map could be restored in mice.

In this new work, Yu’s team, led by first author Limei Ma, Ph.D., reports that if the silenced sensory neurons are reactivated within a week of a mouse’s birth, erroneous olfactory neuron connections are restored. Beyond that critical period, however, neurons appeared to lose the capacity to make the right connections and in fact maintained connections to the wrong glomeruli. “After the first week, we believe that newly generated neurons follow pre-existing tracks to their target,” says Ma, Senior Research Specialist in the Yu lab. A key finding in the report supports this idea. The team provoked a temporary identity crisis in olfactory neurons by broadly mis-expressing an odorant receptor called M71 in cells where it would not normally be displayed. Surprisingly, only the neurons that normally express the M71 receptor targeted the “wrong” glomeruli, not the neurons that express different odorant receptors.

An interpretation of this experiment is that late-born olfactory neurons expressing a particular receptor recognize and follow a track laid down earlier by neurons expressing the very same receptor—even if the latter expressed that receptor due to experimental manipulation. “These olfactory neurons have identity tags,” says Ma, referring to the receptors. “And they like to follow others displaying the same tag.”

As yet, investigators have not identified the molecular basis for the targeting switch occurring at the end of one-week period. “We don’t know what keeps these late stage cells from re-establishing the right connections,” explains Ma. “Either the cues that guide them disappear or their axons encounter a physical barrier to the target.”

Yu envisions the studies in the olfactory system will provide clues on how a regenerated neuron, either through a natural process in the case of the olfactory neuron, or by stem technology, find their target and make the right connection. “To repair a damaged spinal cord, you will need to ensure that newly generated motor neurons target the right muscle,” says Yu. “The next goal is to identify the molecular cues that enable correct projections to be established.”

The Yu paper is accompanied by a companion Science study led by Gilad Barnea, Ph.D., of Brown University, who reports a similar critical time period while employing a different approach. In addition to Ma, other contributors to the study include Yunming Wu, Qiang Qiu, Ph.D., Hayley Scheerer and Andrea Moran from Stowers.

The Stowers Institute for Medical Research funded the research.