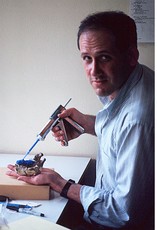 Newswise — New findings suggest that the ancient human "cousin" known as the "Nutcracker Man" wasn't regularly eating anything like nuts after all.

A University of Arkansas professor and his colleagues used a combination of microscopy and fractal analysis to examine marks on the teeth of members of an ancient human ancestor species and found that what it actually ate does not correspond with the size and shape of its teeth. This finding suggests that structure alone is not enough to predict dietary preferences and that evolutionary adaptation for eating may have been based on scarcity rather than on an animal's regular diet.

"These findings totally run counter to what people have been saying for the last half a century," said Peter Ungar, professor of anthropology in the J. William Fulbright College of Arts and Sciences. "We have to sit back and re-evaluate what we once thought."

Ungar and his colleagues Frederick E. Grine of Cambridge University and Stony Brook University and Mark F. Teaford of Johns Hopkins University School of Medicine reported their findings in the PLoS ONE, the online, open-access journal from the Public Library of Science."

The researchers examined the teeth of Paranthropus boisei, an ancient hominin that lived between 2.3 million and 1.2 million years ago and is known popularly as the "Nutcracker Man" because it has the biggest, flattest cheek teeth and the thickest enamel of any known hominin. Since the first specimen was reported by Mary and Louis Leakey in 1959, scientists have believed that P. boisei fed on nuts and seeds or roots and tubers found on the savannas throughout eastern Africa because the teeth, cranium and mandible appear to be built for chewing and crunching hard objects.

"The morphology suggests what P. boisei could eat, but not necessarily what it did eat," Ungar said.

Anthropologists have traditionally inferred the diet of this and other ancient human ancestors by looking at the size and shape of the teeth and jaws. However, by looking at the patterns of microscopic wear on a tooth, scientists can get direct evidence for what these species actually ate.

Ungar and his colleagues used a combination of a scanning confocal microscope, engineering software and scale-sensitive fractal analysis to create a microwear texture analysis of the molars of seven specimens of P. boisei. The specimens spanned a time frame of almost a million years and were found in Kenya, Tanzania and Ethiopia. Using these techniques, they were able to create three-dimensional "point clouds" that showed the pits and scratches on the teeth.

The researchers looked at complexity and directionality of wear textures in the teeth they examined. Since food interacts with teeth, it leaves behind telltale signs that can be measured. Hard, brittle foods like nuts and seeds tend to lead to more complex tooth profiles, while tough foods like leaves lead to more parallel scratches, which corresponds with directionality.

They compared the dental microwear profiles of P. boisei to the microwear profiles of modern-day primates that eat different types of diets " grey-cheeked mangabeys and brown capuchins, which eat mostly soft items but fall back on hard nuts or palm fronds, and the mantled howling monkey and silvered leaf monkey, which eat mostly leaves and other tough foods. They also compared the microwear analysis to analyses of teeth from some of the fossil's more contemporary counterparts -- Australopithecus africanus, which lived between 3.3 million and 2.3 million years ago, and Paranthropus robustus, which lived between 2 million and 1.5 million years ago.

The P. boisei teeth had light wear, suggesting that none of the individuals ate extremely hard or tough foods in the days leading up to death. It's a pattern more consistent with modern-day fruit-eating animals than with most modern-day primates.

"It looks more like they were eating Jell-o," Ungar said.

This finding, while contradictory to previous speculation on the diet of P. boisei, is in line with a paradox that has been documented in fish. Liem's Paradox states that animals may actively avoid eating the very foods they have developed adaptations for when they can find other food sources.

It appears that this paradox may hold true for P. boisei and for some modern-day primates as well.

"If you give a gorilla a choice of eating a sugary fruit or a leaf, it will take the fruit every time," Ungar said. "But if you look at a gorilla's skull, its sharp teeth are adapted to consuming tough leaves. They don't eat the leaves unless they have to."

This finding represents a fundamental shift in the way researchers look at the diets of these hominins.

"This challenges the fundamental assumptions of why such specializations occur in nature," Ungar said. "It shows that animals can develop an extreme degree of specialization without the specialized object becoming a preferred resource."

This project was funded in part by grants from the National Science Foundation. The researchers' study is available at http://www.plosone.org/doi/pone.0002044 .

PLoS ONE (Public Library of Science)