Fires in the Sierra Nevada likely to grow in frequency 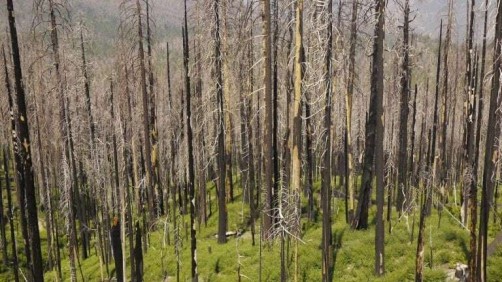 Wildfires have ravaged portions of the Sierra Nevada, such as this section along Route 41 south of Yosemite National Park, and UCI Earth system scientists expect the situation to get worse. In a new paper in Sciences Advances, the researchers say that for each 1 degree Celsius rise in temperature, the chance of fire jumps 19 percent to 22 percent.

Newswise — Irvine, Calif., Nov. 17, 2021 – Naturalist John Muir called the Sierra Nevada “the Range of Light.” But a more ominous nickname, “the Range of Fire,” may lie ahead, according to new research from the University of California, Irvine. By 2040, as humans continue to change the climate, fire-conducive heat waves will become so common that the number of blazes throughout the Sierra stands to increase about 50 percent, researchers found.

The study is the first to link the outbreak of specific fires in the mountain range to daily temperature spikes. The authors behind the work, which appears in the journal Science Advances, hope their findings will help firefighters predict wildfire risks more accurately – and plan accordingly.

Although it’s widely known that heat waves often precede the ignition of wildfires, no previous study tracked the precise relationship between the two, said James Randerson, a UCI professor of Earth system science and study co-author. “Where our paper makes an advance is we’re able to show with data what happens to fire risk when the region experiences record-breaking temperatures.”

During summer, for each 1 degree Celsius rise in temperature, the chance of fire jumps 19 percent to 22 percent, the team found. “The risk increases exponentially as a function of daily temperature,” said lead author Aurora Gutierrez, a project specialist in UCI’s Department of Earth System Science.

Global warming is likely to exacerbate the situation. By the 2040s, average summer temperatures in the Sierra are expected to climb by 2 degrees Celsius, the researchers said.

“There’s a lot of heating already in the pipeline,” Randerson noted. “We’re looking at a worsening situation in the next few decades, and our work highlights the importance of rapidly expanding efforts to manage shrub and forest ecosystems to reduce threats posed by wildfire.”

To make their calculations, the researchers combined meteorological data with information on the day-to-day timing of fire ignitions and daily burned surface area from NASA satellites. The first time the scientists attempted the analysis, they found temperature had a strong effect on wildfires, but data from 2020 wasn’t yet available. When the team subsequently added in that year, which saw such blazes as the Creek Fire burn nearly 400,000 acres and the skies over places like San Francisco turn a hellish orange, the line on their temperature-wildfire graph shot off the axes.

“When we added the 2020 data, we had to change the scale,” Gutierrez said.

Heat waves can cause fuels like dead plant matter to dry fast, and “the risk of people accidentally starting a fire is exponentially higher on a hot day,” said Stijn Hantson, a former UCI project scientist and co-author of the paper. Hantson added that lightning strikes and human behavior — from tossed cigarettes to arson — are the sparks behind most wildfires in the Sierra. “Initial fire growth can be explosive, making fires that start on hot days very difficult to contain,” he said.

The ability to know exactly what kinds of temperatures tend to lead to the ignition of wildfires is fast becoming essential knowledge as warming continues to worsen, Randerson said.

Funding for the study was provided by the UC National Laboratory Fees Research Program, the California Strategic Growth Council and NASA.

About the University of California, Irvine: Founded in 1965, UCI is the youngest member of the prestigious Association of American Universities and is ranked among the nation’s top 10 public universities by U.S. News & World Report. The campus has produced three Nobel laureates and is known for its academic achievement, premier research, innovation and anteater mascot. Led by Chancellor Howard Gillman, UCI has more than 36,000 students and offers 224 degree programs. It’s located in one of the world’s safest and most economically vibrant communities and is Orange County’s largest employer, contributing $7 billion annually to the local economy and $8 billion statewide. For more on UCI, visit www.uci.edu.