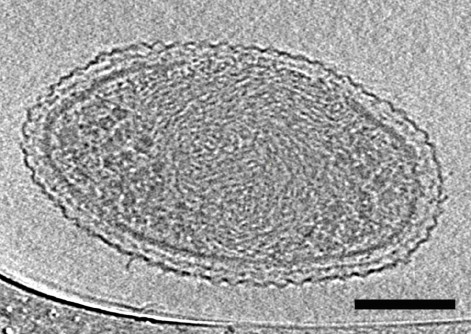 This cryo-electron tomography image reveals the internal structure of an ultra-small bacteria cell like never before. The cell has a very dense interior compartment and a complex cell wall. The darker spots at each end of the cell are most likely ribosomes. The image was obtained from a 3-D reconstruction. The scale bar is 100 nanometers. 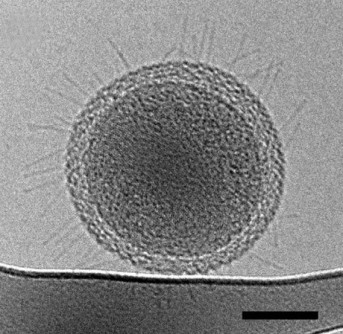 A lifeline to other cells? Cryo-transmission electron microscopy captured numerous hairlike appendages radiating from the surface of this ultra-small bacteria cell. The scientists theorize the pili-like structures enable the cell to connect with other microbes and obtain life-giving resources. The scale bar is 100 nanometers.

Newswise — Scientists have captured the first detailed microscopy images of ultra-small bacteria that are believed to be about as small as life can get. The research was led by scientists from the U.S. Department of Energy’s Lawrence Berkeley National Laboratory and the University of California, Berkeley. The existence of ultra-small bacteria has been debated for two decades, but there hasn’t been a comprehensive electron microscopy and DNA-based description of the microbes until now.

The cells have an average volume of 0.009 cubic microns (one micron is one millionth of a meter). About 150 of these bacteria could fit inside an Escherichia coli cell and more than 150,000 cells could fit onto the tip of a human hair.

The scientists report their findings Friday, Feb. 27, in the journal Nature Communications.

The diverse bacteria were found in groundwater and are thought to be quite common. They’re also quite odd, which isn’t a surprise given the cells are close to and in some cases smaller than several estimates for the lower size limit of life. This is the smallest a cell can be and still accommodate enough material to sustain life. The bacterial cells have densely packed spirals that are probably DNA, a very small number of ribosomes, hair-like appendages, and a stripped-down metabolism that likely requires them to rely on other bacteria for many of life’s necessities.

The bacteria are from three microbial phyla that are poorly understood. Learning more about the organisms from these phyla could shed light on the role of microbes in the planet’s climate, our food and water supply, and other key processes.

“These newly described ultra-small bacteria are an example of a subset of the microbial life on earth that we know almost nothing about,” says Jill Banfield, a Senior Faculty Scientist in Berkeley Lab’s Earth Sciences Division and a UC Berkeley professor in the departments of Earth and Planetary Science and Environmental Science, Policy and Management.

“They’re enigmatic. These bacteria are detected in many environments and they probably play important roles in microbial communities and ecosystems. But we don't yet fully understand what these ultra-small bacteria do,” says Banfield.

Banfield is a co-corresponding author of the Nature Communications paper with Birgit Luef, a former postdoctoral researcher in Banfield’s group who is now at the Norwegian University of Science and Technology, Trondheim.

“There isn’t a consensus over how small a free-living organism can be, and what the space optimization strategies may be for a cell at the lower size limit for life. Our research is a significant step in characterizing the size, shape, and internal structure of ultra-small cells,” says Luef.

To concentrate these cells in a sample, they filtered groundwater collected at Rifle, Colorado through successively smaller filters, down to 0.2 microns, which is the size used to sterilize water. The resulting samples were anything but sterile. They were enriched with incredibly tiny microbes, which were flash frozen to -272 degrees Celsius in a first-of-its-kind portable version of a device called a cryo plunger. This ensured the microbes weren’t damaged in their journey from the field to the lab.

The frozen samples were transported to Berkeley Lab, where Luef, with the help of Luis Comolli of Berkeley Lab’s Life Sciences Division, characterized the cells’ size and internal structure using 2-D and 3-D cryogenic transmission electron microscopy. The images also revealed dividing cells, indicating the bacteria were healthy and not starved to an abnormally small size.

The bacteria’s genomes were sequenced at the Joint Genome Institute, a DOE Office of Science User Facility located in Walnut Creek, California, under the guidance of Susannah Tringe. The genomes were about one million base pairs in length. In addition, metagenomic and other DNA-based analyses of the samples were conducted at UC Berkeley, which found a diverse range of bacteria from WWE3, OP11, and OD1 phyla.

This combination of innovative fieldwork and state-of-the-art microscopy and genomic analysis yielded the most complete description of ultra-small bacteria to date.

Among their findings: Some of the bacteria have thread-like appendages, called pili, which could serve as “life support” connections to other microbes. The genomic data indicates the bacteria lack many basic functions, so they likely rely on a community of microbes for critical resources.

The scientists also discovered just how much there is yet to learn about ultra-small life.

“We don’t know the function of half the genes we found in the organisms from these three phyla,” says Banfield.

The scientists also used the Advanced Light Source, a DOE Office of Science User Facility located at Berkeley Lab, where Hoi-Ying Holman of the Earth Sciences Division helped determine the majority of the cells in the samples were bacteria, not Archaea.

The research is a significant contribution to what’s known about ultra-small organisms. Recently, scientists estimated the cell volume of a marine bacterium at 0.013 cubic microns, but they used a technique that didn't directly measure the cell diameter. There are also prior electron microscopy images of a lineage of Archaea with cell volumes as small as 0.009 cubic microns, similar to these bacteria, including results from some of the same researchers. Together, the findings highlight the existence of small cells with unusual and fairly restricted metabolic capacities from two of the three major branches of the tree of life. 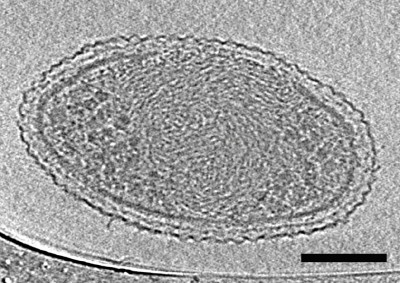 Caption: This cryo-electron tomography image reveals the internal structure of an ultra-small bacteria cell like never before. The cell has a very dense interior compartment and a complex cell wall. The darker spots at each end of the cell are most likely ribosomes. The image was obtained from a 3-D reconstruction. The scale bar is 100 nanometers. 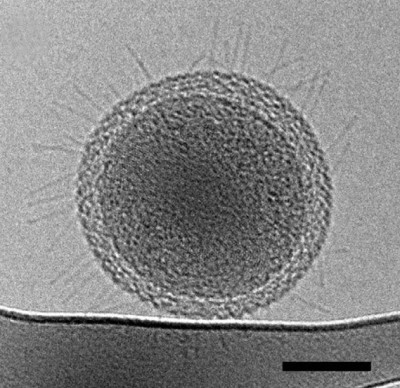 Caption: A lifeline to other cells? Cryo-transmission electron microscopy captured numerous hairlike appendages radiating from the surface of this ultra-small bacteria cell. The scientists theorize the pili-like structures enable the cell to connect with other microbes and obtain life-giving resources. The scale bar is 100 nanometers.