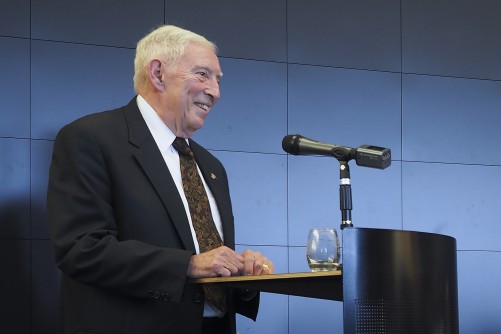 Arthur Bienenstock, professor emeritus at SLAC and Stanford, has been honored by the creation of an endowed professorship in his name. 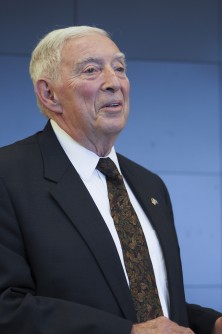 Newswise — Stanford University and the Department of Energy’s SLAC National Accelerator Laboratory have established the first endowed professorship that is reserved specifically for joint appointments between the two.

Called the Wallenberg-Bienenstock Professorship, the new chair honors Arthur I. “Artie” Bienenstock “for his outstanding efforts to strengthen links between Stanford and Swedish universities,” said Peter Wallenberg Jr., chairman of the Knut and Alice Wallenberg Foundation, which donated $4 million to establish the professorship.

A professor emeritus at SLAC and Stanford and former longtime director of the Stanford Synchrotron Radiation Lightsource, Bienenstock has for the past seven years directed the Wallenberg Research Link at Stanford, which fosters collaborations between Stanford and Swedish researchers and facilitates campus visits by groups and individuals from Swedish universities, industry and government.

“I was completely surprised and pleased,” said Bienenstock, who was informed of the professorship at a March 20 campus celebration of his 80th birthday.

“This is a tremendous honor, one that will help bring SLAC and the campus closer together. And I should mention that it’s an absolute delight to work with the Wallenberg Foundation directors and staff; they have a vision of improving Swedish science and education and value the relationship with Stanford as part of that vision.”

Endowed chairs are among the highest honors awarded to faculty members, and thus an important tool in attracting and retaining internationally renowned scholars and researchers. As with all such endowments, the donated funds are invested and a percentage of the income used to fund the professorship.

“We are very grateful to the Wallenberg Foundation and family for this meaningful gift,” said Stanford President John Hennessy. “Artie has been an extraordinary scientific leader for Stanford, SLAC and our nation, a tremendous friend to Sweden, and an incredibly effective bridge builder for a set of thriving collaborations between Stanford faculty and our colleagues in a number of Swedish universities. The chair is the perfect commemoration of his work and will inspire future generations of scientists to follow in his footsteps.”

The chair will be a university-level professorship for a faculty member who will have a joint appointment on the faculties of SLAC and a Stanford science or engineering department.

“This professorship will give us a great tool for recruiting top-notch faculty to SLAC and Stanford, and will further strengthen the ties between the university and the lab that are so important to both,” said SLAC Director Chi-Chang Kao. “By combining our strengths, we are able to make progress in areas such as chemical and materials science, biomedical science and energy research much faster than either could alone. I want to thank the Wallenberg Foundation for their generous support of this vision.”

The foundation has a long history of ties to Stanford. It funds a postdoctoral fellowship program that has greatly expanded over the past few years, and this year is bringing 15 young Swedish scientists and scholars to Stanford and SLAC. The foundation also funded the restoration of Wallenberg Hall on campus and established the Wallenberg Global Learning Network Project, a collaboration between Stanford and Swedish universities that carried out dozens of projects from 2002-2013.

It is hoped that the Wallenberg-Bienenstock professor will continue this tradition, helping to foster strong ties among Stanford, SLAC and Swedish researchers, and mentoring Wallenberg postdocs.

“This professorship is complementary to the growing network of former Stanford Wallenberg postdoctoral fellows, and will expand the Wallenberg legacy on campus beyond the Wallenberg Hall,” said Göran Sandberg, the foundation’s executive director.

In addition to directing the Wallenberg Research Link, Bienenstock is special assistant to Hennessey for federal research policy. He also serves on the National Science Board, which is the governing board of the National Science Foundation and advises the President and Congress on science policy.

He has held a variety of positions since arriving at Stanford in 1967, including professor of photon science at SLAC and professor of applied physics and of materials science and engineering at Stanford. He directed SSRL from 1978 to 1997, serving as associate lab director for six of those years, and left to become associate director for science in the White House Office of Science and Technology Policy during the Clinton Administration. On his return to Stanford he directed the Geballe Laboratory for Advanced Materials and later served as vice provost and dean of research and graduate policy.

Based in Stockholm, Sweden, the Knut and Alice Wallenberg Foundation is one of the largest private funders of research in Europe. The foundation grants funding in two main areas: research projects of high scientific potential and individual support of excellent scientists. The funding goes mainly to research within the natural sciences, technology and medicine.

SLAC National Accelerator Laboratory is supported by the Office of Science of the U.S. Department of Energy. The Office of Science is the single largest supporter of basic research in the physical sciences in the United States, and is working to address some of the most pressing challenges of our time. For more information, please visit science.energy.gov. For more information, please visit slac.stanford.edu. 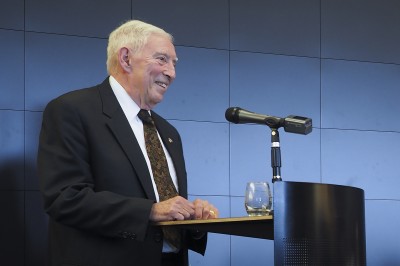 Caption: Arthur Bienenstock, professor emeritus at SLAC and Stanford, has been honored by the creation of an endowed professorship in his name. 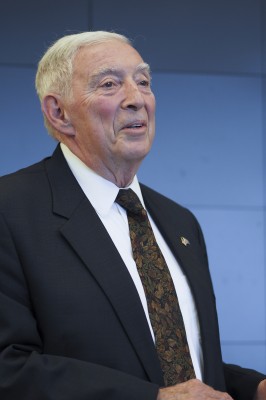