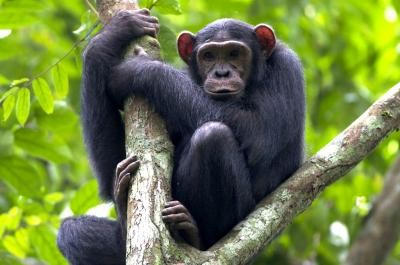 Chimpanzee in the Republic of Congo

The findings are published in the American Journal of Primatology by a team of scientists led by the Max Planck Institute for Evolutionary Anthropology, Wildlife Conservation Society (WCS), and other groups.

Authors looked at 156 sites in 20 countries, developing a model that spans the entire African great ape range to determine abundance, and to identify key factors influencing their distribution at this large scale. The highest densities of apes were found in Central Africa, and the lowest in West Africa.

Said the study’s lead author Isabel Ordaz-Németh of Max Planck Institute for Evolutionary Anthropology: “The findings reveal that the impact of human activities dominates over ecological factors in determining where great apes are still found today. This means that even if suitable habitat is still present at various locations, such as tropical rainforest, apes do not occur anymore or at much lower density, because of human activities.”

In addition, the study found that only 10.7 percent of the predicted great ape population was found in areas with high levels of legal protection (IUCN Category I and II protected areas).

Said co-author Fiona “Boo” Maisels of WCS: “This study mirrors the recent findings that elephant distribution across the African continent is now also mostly constrained by human activities, rather than environmental variables. Current great ape conservation strategies are largely focused on protected areas, but only one in ten great apes live in these areas. We must improve the protection for the remaining nine-tenths of great apes that are currently outside them, and assess the impacts of alternative policies, infrastructure development or stricter guidelines for resource extraction.”

An important question emerging from these results is whether we can find solutions for harmonizing economic development and the survival of great ape populations.

The authors note that recent assessments of African great ape populations have revealed drastic declines. To successfully protect these endangered species, it is essential to evaluate the effectiveness of policies and outcomes of different scenarios. These scenarios can include, for example, the impact of resource extraction sites, climate change, large scale land-planning, and the implementation of policies that are, for example, related to forest management, or carbon storage policies for climate change mitigation.