"Parents need to recognize that autism is treatable if caught early," said Jayne Lytel, who founded and heads The Early Intervention Network. "While not all children will recover, the earlier children get into treatment the better off they'll be," said Lytel, author of Act Early Against Autism, a new book from Penguin that blends memoir and prescriptive advice on autism spectrum disorders.

The PSA campaign, a partnership between the intervention network and the D.C. Department of Human Services' Early Care and Education Administration, offers users five ways to make a difference in the lives of children afflicted by autism, a brain disorder that now strikes one child out of every 150 in the United States, alone. Autism, which can be diagnosed before the age of 2 years, robs a child's ability to communicate, make friends and find joy.

The No. 1 way users can make a difference is to get the word out about autism's earliest warning signs by viewing a YouTube video that features pictures of infants and toddlers holding red flags. "We hope to be the No. 1 watched video on autism's early warning signs next month," Lytel said. "Yesterday, we were ranked No. 18."

Each picture in the YouTube slideshow is accompanied by a message that identifies an early warning sign. For example, the message displayed near the picture of a 1-year-old reads: "I'm 12 months old and I don't notice you." For a 6 month old, the message says, "I'm 6 months old and I don't smile back at you," and the message that accompanies a 2-year-old reads, "I'm 24 months and I don't pretend." A link to the YouTube video is on the homepage of the Network's site at http://www.actearly.org or can be accessed directly on the network's nonprofit channel at http://www.youtube.com/actearlyagainstautis. The messages featured in the online campaign mirror those displayed throughout the greater D.C. bus and subway system.

The online campaign complements a print PSA campaign that will run in the subway and bus system in the District of Columbia, Maryland and Northern Virginia. During the first week of April, volunteers will distribute 2,000 red flags and postcards at designated Metro stops, including Metro Center and Capitol South. Lytel and her son, Leo, plan to be at Metro Center between 8:30 am and 9:30 am on April 1 to kick off the campaign. Both will be handing out red flags and postcards to passerbys.

The red flags direct the general public to visit http://www.actearly.org to locate federally funded services that help parents with paying for the cost of evaluations and treatment. The campaign also encourages the public to take action by purchasing a poster on autism's early warning signs for their child care center or pediatrician's office at www.cafepress.com/actearly. The Network hopes to distribute the posters in child care and pediatricians' offices across the country.

The Early Intervention Network promotes policies and practices that heighten awareness of autism's earliest warning signs and expedite services for newly diagnosed children. Lytel founded the network in 2007 to give other parents the gift of early intervention, which made all the difference for her own son.

About Jayne Lytel:Jayne Lytel founded and heads The Early Intervention Network: Enabling Families. In her memoir, Act Early Against Autism, Lytel writes about her experience "recovering" her son from autism, a journey that began in September 2001.

Caption: Display that will be featured on DC Metro buses to raise awareness of autism's early warning signs for national autism awareness month in April. 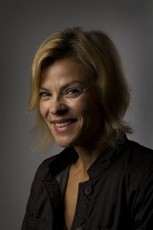 Caption: Jayne Lytel is executive director of the Early Intervention Network and author of Act Early Against Autism, a new Penguin release.