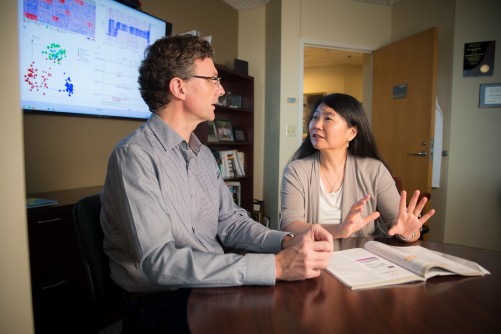 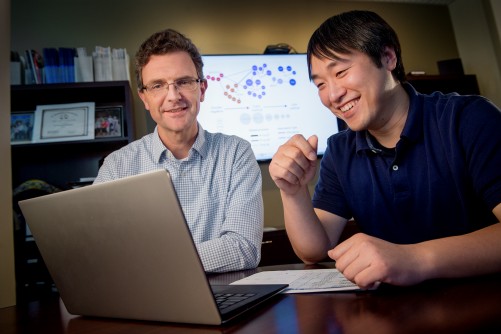 The project’s 39 researchers were led by Charles Mullighan, M.D., MBBS, a member of the St. Jude Department of Pathology, with co-corresponding authors Jinghui Zhang, Ph.D., chair of the St. Jude Department of Computational Biology and Stephen Hunger, M.D., of the Children’s Hospital of Philadelphia. The research was selected for advance online publication today in the journal Nature Genetics.

“This first comprehensive and systematic analysis in a large group of patients revealed many new mutations that are biologically significant as well as new drug targets that could be clinically important,” Mullighan said. “Leukemias typically arise from multiple genetic changes that work together. Most previous studies have not had the breadth of genomic data in enough patients to identify the constellations of mutations and recognize their associations.”

T-ALL is a form of leukemia in which the immune system’s T cells acquire multiple mutations that freeze the cells in an immature stage, causing them to accumulate in the body. ALL is the most common type of childhood cancer, affecting about 3,000 children nationwide each year. T-ALL constitutes about 15 percent of those cases. While about 90 percent of children with ALL can be cured, many still relapse and require additional treatment.

The multi-institutional effort involved sequencing the genomes of 264 children and young adults with T-ALL—the largest such group ever analyzed. The study involved sophisticated analysis of multiple types of genomic data, led by Yu Liu, Ph.D., a postdoctoral fellow in Zhang’s Computational Biology laboratory and first author of the study. Their analyses identified 106 driver genes—those whose mutations trigger the malfunctions that block normal T cell development and give rise to cancer. Half of those mutated genes had not been previously identified in childhood T-ALL.

The study enabled the researchers to compare the frequencies of mutations among patients whose cancerous cells were sequenced at the same detailed level, Mullighan said. Also important, he said, was that all the patients had uniform treatment, which enabled the researchers to draw meaningful associations between the genetics of their cancer and the response to different treatments. Such associations will enable better diagnosis and treatment of T-ALL with existing drugs.

Researchers analyzed the cancerous T cells as well as those that treatments had rendered non-cancerous. Comparing the two populations of cells could reveal valuable clues about why specific treatments were successful in thwarting particular cancer-causing mutations.

The findings revealed significant unexpected findings. “We went into this study knowing that we didn’t know the full genomic landscape of T-ALL,” Hunger said. “But we were surprised that over half of the new targets and mutations were previously unrecognized. It was particularly unexpected and very striking that some mutations were exclusively found in some subtypes of T-ALL, but not others.”

Cancers are driven by mutations in genes that are the blueprint for protein enzymes in signaling pathways in cells—the biological equivalent of circuits in a computer. While a cancer may arise from an initial founding mutation, that mutation triggers a cascade of other mutations that help drive the cancer.

The new genomic analysis confirmed that T-ALL was driven by mutations in known signaling pathways, including JAK–STAT, Ras and PTEN–PI3K.

However, the new analysis identified many more genetic mutations in those known pathways. The findings offered more targets for drugs to shut down the aberrant cells. “So the frequency of the patients that are potentially amenable to these targeted approaches is higher than we appreciated before,” Mullighan said.

The researchers also found cases in which the same T-ALL subtype had mutations in different pathways triggered by the same cancer-causing founding mutation. “We believe this finding suggests we can target such subtypes with an inhibitor drug for one of the pathways, and it’s likely to be effective,” Mullighan said.

The multitude of new mutations uncovered in the new study will also enable researchers to use genetic engineering to create mouse models that more accurately reflect human cancer, he said. Such models are invaluable for understanding the biological machinery of T-ALL, as well as testing new drug strategies. “We now have a launching pad, if you will, to design mouse models that include multiple genetic mutations to more faithfully reflect the leukemias we see in humans,” Mullighan said.

The research also offers a broader lesson for genomic studies of cancers, Zhang said. “Our study is further evidence that if you systematically study a large enough population with careful, detailed genomic analysis, you will discover new mutational patterns of collaboration or exclusion across multiple genes unique to each T-ALL subtype,” she said.