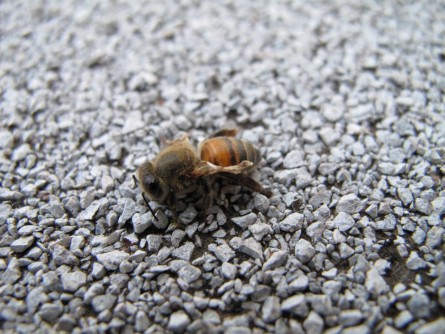 This bee is infected with Deformed Wing Virus, one of many viruses spread by varroa mites. 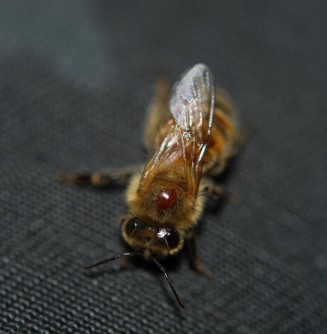 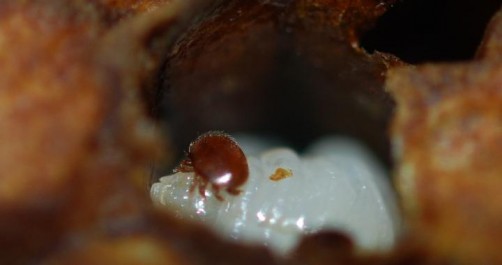 Newswise — Honey bee colonies in the United States are in decline, due in part to the ill effects of voracious mites, fungal gut parasites and a wide variety of debilitating viruses. Researchers from the University of Maryland and the U.S. Department of Agriculture recently completed the first comprehensive, multi-year study of honey bee parasites and disease as part of the National Honey Bee Disease Survey. The findings reveal some alarming patterns, but provide at least a few pieces of good news as well.

The results, published online in the journal Apidologie on April 20, 2016, provide an important five-year baseline against which to track future trends. Key findings show that the varroa mite, a major honey bee pest, is far more abundant than previous estimates indicated and is closely linked to several damaging viruses. Also, the results show that the previously rare Chronic Bee Paralysis Virus has skyrocketed in prevalence since it was first detected by the survey in 2010.

The good news, however, is that three potentially damaging exotic species have not yet been introduced into the United States: the parasitic tropilaelaps mite, the Asian honey bee Apis cerana and slow bee paralysis virus.

"Poor honey bee health has gained a lot of attention from scientists and the media alike in recent years. However, our study is the first systematic survey to establish disease baselines, so that we can track changes in disease prevalence over time," said Kirsten Traynor, a postdoctoral researcher in entomology at UMD and lead author on the study. "It highlights some troubling trends and indicates that parasites strongly influence viral prevalence."

The results, based on a survey of beekeepers and samples from bee colonies in 41 states and two territories (Puerto Rico and Guam), span five seasons from 2009 through 2014. The study looked at two major parasites that affect honey bees: the varroa mite and nosema, a fungal parasite that disrupts a bee's digestive system. The study found clear annual trends in the prevalence of both parasites, with varroa infestations peaking in late summer or early fall and nosema peaking in late winter.

The study also found notable differences in the prevalence of varroa and nosema between migratory and stationary beehives. Migratory beekeepers--those who truck their hives across the country every summer to pollinate a variety of crops--reported lower levels of varroa compared with stationary beekeepers, whose hives stay put year-round. However, the reverse was true for nosema, with a lower relative incidence of nosema infection reported by stationary beekeepers.

Additionally, more than 50 percent of all beekeeping operations sampled had high levels of varroa infestation at the beginning of winter--a crucial time when colonies are producing long-lived winter bees that must survive on stored pollen and honey.

"Our biggest surprise was the high level of varroa, especially in fall, and in well-managed colonies cared for by beekeepers who have taken steps to control the mites," said study co-author Dennis vanEngelsdorp, an assistant professor of entomology at UMD. "We knew that varroa was a problem, but it seems to be an even bigger problem than we first thought. Moreover, varroa's ability to spread viruses presents a more dire situation than we suspected."

For years, evidence has pointed to varroa mites as a culprit in the spread of viruses, vanEngelsdorp noted. Until now, however, much of this evidence came from lab-based studies. The current study provides crucial field-based validation of the link between varroa and viruses.

"We know that varroa acts as a vector for viruses. The mites are basically dirty hypodermic needles," Traynor said. "The main diet for the mites is blood from the developing bee larva. When the bee emerges, the mites move on to the nearest larval cell, bringing viruses with them. Varroa can also spread viruses between colonies. When a bee feeds on a flower, mites can jump from one bee to another and infect a whole new colony."

Nosema, the fungal gut parasite, appears to have a more nuanced relationship with honey bee viruses. Nosema infection strongly correlates to the prevalence of Lake Sinai Virus 2, first identified in 2013, and also raises the risk for Israeli Acute Paralysis Virus. However, the researchers found an inverse relationship between nosema and Deformed Wing Virus.

Some viruses do not appear to be associated with varroa or nosema at all. One example is Chronic Bee Paralysis Virus, which causes loss of motor control and can kill individual bees within days. This virus was first detected by the survey in the U.S. in 2010. At that time, less than 1 percent of all samples submitted for study tested positive for the virus. Since then, the virus' prevalence roughly doubled every year, reaching 16 percent in 2014.

"Prior to this national survey, we lacked the epidemiological baselines of disease prevalence in honey bees. Similar information has been available for years for the cattle, pork and chicken industries," Traynor said. "I think people who get into beekeeping need to know that it requires maintenance. You wouldn't get a dog and not take it to the vet, for example. People need to know what is going on with the livestock they're managing."

While parasites and disease are huge factors in declining honey bee health, there are other contributors as well. Pesticides, for example, have been implicated in the decline of bee colonies across the country.

"Our next step is to provide a similar baseline assessment for the effects of pesticides," vanEngelsdorp said. "We have multiple years of data and as soon as we've finished the analyses, we'll be ready to tell that part of the story as well."

This work was supported by the United States Department of Agriculture's Animal and Plant Health Inspection Service. The content of this article does not necessarily reflect the views of this organization.

The College of Computer, Mathematical, and Natural Sciences at the University of Maryland educates more than 7,000 future scientific leaders in its undergraduate and graduate programs each year. The college's 10 departments and more than a dozen interdisciplinary research centers foster scientific discovery with annual sponsored research funding exceeding $150 million. 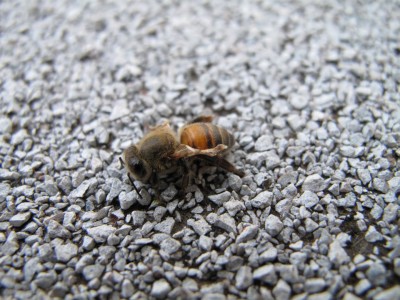 Caption: This bee is infected with Deformed Wing Virus, one of many viruses spread by varroa mites. 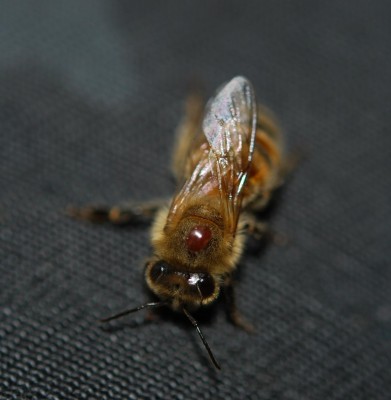 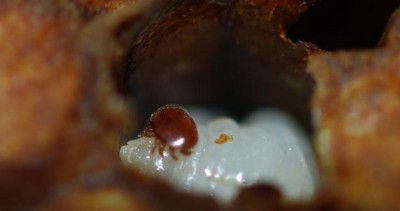