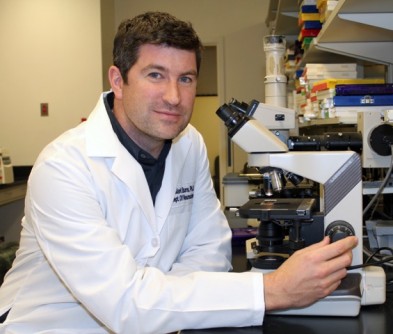 Mark P. Burns, PhD, assistant professor of neuroscience at GUMC and director of the Laboratory for Brain Injury and Dementia.

Newswise — WASHINGTON (Feb. 5, 2015)— Doctors who order several days of rest after a person suffers a concussion are giving sound advice, say researchers, and new data from animal models explains why.

Georgetown University Medical Center neuroscientists say rest — for more than a day — is critical for allowing the brain to reset neural networks and repair any short-term injury. The new study in mice also shows that repeated mild concussions with only a day to recover between injuries leads to mounting damage and brain inflammation that remains evident a year after injury.

“It is good news that the brain can recover from a hit if given enough time to rest and recover. But on the flip side, we find that the brain does not undertake this rebalancing when impacts come too close together,” says the study’s lead researcher, Mark P. Burns, PhD, associate professor of neuroscience at GUMC and director of the Laboratory for Brain Injury and Dementia.

This first-of-its-kind study, published online today and in the March 2016 issue of American Journal of Pathology, modeled repeated mild head trauma as a means to investigate brain damage that occurs after a sports, military or domestic abuse injury.

Investigators developed a mouse model of repetitive, extremely mild concussive impacts. They compared the brain’s response to a single concussion with an injury received daily for 30 days and one received weekly over 30 weeks.

Mice with a single insult temporarily lose 10-15 percent of the neuronal connections in their brains, but no inflammation or cell death resulted, Burns says. With three days rest, all neuronal connections were restored. This neuronal response is not seen in mice with daily concussions, but the pattern is restored when a week of rest is given between each insult, Burns says.

When a mild concussion occurred each day for a month, inflammation and damage to the brain’s white matter resulted. “This damage became progressively worse for two months and remained apparent one year after the last impact,” Burns says.

“The findings mirror what has been observed about such damage in humans years after a brain injury, especially among athletes,” Burns says. “Studies have shown that almost all people with single concussions spontaneously recover, but athletes who play contact sports are much more susceptible to lasting brain damage. These findings help fill in the picture of how and when concussions and mild head trauma can lead to sustained brain damage.”

The study was supported by Georgetown University’s Neural Injury and Plasticity Training Program, the National Institute for Neurological Disorders and Stroke (R01 NS067417), a supplement to Promote Diversity in Health-Related Research, a donation from KPB Corporation, the Canadian Institute of Health Research, Fonds de Recherche en Santé du Québec and the Natural Sciences and Engineering Research Council of Canada.

About Georgetown University Medical CenterGeorgetown University Medical Center (GUMC) is an internationally recognized academic medical center with a three-part mission of research, teaching and patient care (through MedStar Health). GUMC’s mission is carried out with a strong emphasis on public service and a dedication to the Catholic, Jesuit principle of cura personalis -- or "care of the whole person." The Medical Center includes the School of Medicine and the School of Nursing & Health Studies, both nationally ranked; Georgetown Lombardi Comprehensive Cancer Center, designated as a comprehensive cancer center by the National Cancer Institute; and the Biomedical Graduate Research Organization, which accounts for the majority of externally funded research at GUMC including a Clinical and Translational Science Award from the National Institutes of Health.