The question of how the proton – one of the building blocks of the universe – is constructed drives nuclear physicist Kawtar Hafidi’s research. 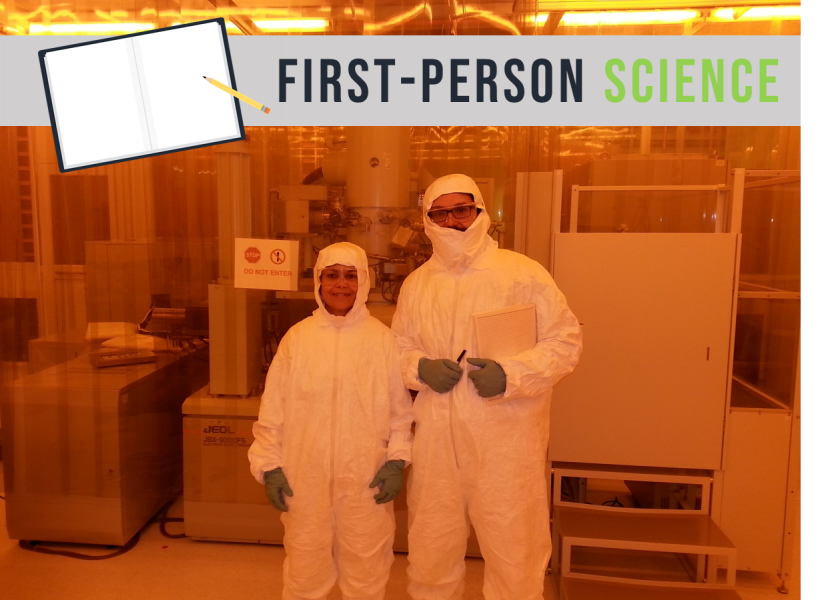 Kawtar Hafidi and her postdoc Whit Armstrong are in the Center for Nanoscale Materials Office of Science user facility at Argonne National Laboratory researching nanowire detectors for future facilities.

In the First-Person Science series, scientists describe how they made significant discoveries over years of research. Kawtar Hafidi is the Associate Laboratory Director for Physical Sciences and Engineering at Argonne National Laboratory.

Newswise — Our job as nuclear physicists is to understand ordinary matter – the stars that we see, the galaxies, everything in the sky. The things that we are made of.

We work to understand matter in terms of its most fundamental constituents. Within an atom, there is a nucleus. Size-wise, it’s like a small marble inside 5 football fields. But that marble carries 99.9 percent of the mass. That is amazing.

Quarks do not live free. A quark has to live with another anti-quark or another two quarks inside particles like protons or neutrons. That hasn’t always been the case; they were free in the form of quark-gluon plasma just after the Big Bang. But at some point, they started clustering into nuclei. We don’t understand how.

You can’t isolate quarks to study them. That makes studying them very hard. Most people choose simplicity. I always choose the hardest area because somebody has to do it! So my team looks at Helium-4, which has two protons and two neutrons.

This process of how quarks and gluons form protons and neutrons is called hadronization. The process of hadronization is a million-dollar question in nuclear physics. At low energy, which we see in the everyday world, the interactions and coupling between quarks are very strong. This strong interaction at lower energies is called confinement.

Quarks’ confinement is why they are never free. My job is to find out why; I would like to understand confinement.

The topic of my PhD thesis was the structure of the deuteron, the nucleus of a form of hydrogen. It’s made of just one proton and one neutron. We explored this structure in an experiment called t20 at the Department of Energy’s Jefferson Lab.

To look inside the proton, we shot electrons at it. If an electron has very high energy, it will go deep inside a proton and interact with one of its quarks. You’re trying to kick one quark out of the group. When the first quark tries to separate from the two others, it is quasi-free. But the distance of this free quark is very small. To be able to understand what happens when a quark is somewhat attached but almost free, you need a detector that can detect things very close by. So we thought maybe we could use a nucleus as both a subject of study and as the detector.

By pushing the resolution higher than had been done before, we expected that the ability for the protons and neutrons alone to explain the nucleus’s structure would break down. We thought we would start seeing the necessity of introducing the quark to explain deuteron’s structure.

But that didn’t happen. That was a big disappointment. Even at that higher resolution, the protons and neutrons model did a pretty decent job of explaining the nuclear structure. The challenge was that we didn’t have enough high energy to make sure we were really hitting a quark.

The question remained: When do we need quarks to describe nuclear structure? We know quarks’ importance, but it was really hard to find the smoking gun.

In my second or third year as a scientist, I had an idea. I proposed it during a nuclear physics long-range planning workshop in 2006. During one session of that workshop, people could present a single slide to share new, crazy ideas. I thought, ‘I want to study the quark structure of nuclei.’

To study the quarks inside the nuclei instead of in a free proton, we needed a nuclear target. Ideally, it would be a light nucleus that we understand the structure of in terms of protons and neutrons, like Helium-4. But at the time, there wasn’t a detector that could detect the recoiling Helium-4.

This is the experiment I proposed. You have an electron coming in. It interacts with the Helium-4 and exchanges a photon (a particle of light). That photon kicks a quark. That quark exchanges energy with another quark. The Helium-4 usually explodes, but there’s a small probability that it stays intact. You detect the angle of the scattered electron and the helium that recoils off the reaction. This reaction is called deep virtual Compton scattering. You are basically disturbing quarks inside of Helium-4 and studying what happens. Scientists had used a similar technique to determine the 3D structure of a free proton, but not ones inside nuclei.

The challenge was that Helium-4 is heavy and doesn’t go forward far enough in the detector. So we proposed making a straw with a gas of Helium-4 inside of it. Around that straw, we built a gas electron multiplier (GEM) detector that could detect Helium-4.

When I proposed this experiment, some people were laughing at me, telling me, “This can never happen.” Whenever you bring new ideas, people fight you. You always have to prove it can be done. It’s very hard to keep pushing for things you believe in until you make them happen.

But the Office of Science took a chance on us.

We took two approaches with this experiment. The first approach led us to create two possible models – one similar to an existing model and a new one.

With the second approach, the goal wasn’t to keep the Helium-4 intact. Instead, we scattered an electron off a proton or neutron, leading that proton or neutron to fly out of the nucleus at the end. This technique is particularly useful for understanding the protons and neutrons inside a nucleus.

This approach also allowed us to study the EMC effect. The EMC effect was discovered by chance in 1982 at CERN in Switzerland. They were measuring the difference between scattering an electron off of an atom of iron compared to scattering it off of deuterium. If the structure of a proton or neutron is the same whether it’s in a nuclei or not – bound or free – those measurements should line up in certain ways. But they saw the measurements weren’t. They saw quarks were behaving differently inside the nucleus than outside of it. But they couldn’t figure out the why and how.

We predicted that our experiment could enhance the EMC effect and help us understand it. That was the promise.

Our experiment did show different results for a bound proton compared to a free one, confirming the EMC effect. But the experiment didn’t fully reveal what we were looking for. After we did all of this, I thought, ‘I understand what we need to do now to really have the ultimate answer.’

We are currently building a detector for Jefferson Lab that will have 100 times more rate capability than the one before – which is amazing. So we will be able to collect a lot more data and get more precise results faster.

With this new detector, we should finally be able to create full 3D cross-section images of the protons and neutrons within nuclei. This data should narrow down the number of possible explanations of bound proton structure. That’s one of the things that pushes me. I like to do experiments that throw models out the window.

In addition, this detector is able to detect more types of particles. In the previous detector, we would eject the proton, leaving us with two neutrons and one proton, which, if bound, is tritium. Or we would eject a neutron, leaving us with two protons and one neutron, which, if bound, is Helium-3. But we couldn’t detect tritium or Helium-3 with the previous detector. We can now.

Detecting all the products of the reaction will tell us far more about the EMC effect. With the new detector, if the electron kicks a proton, I know it kicked one because the detector picked up the recoiling tritium. When I look at the momentum of the tritium, I can figure out if that proton was tightly or loosely bound to other protons and neutrons in the nucleus. That will allow us to see if the EMC effect is the same for protons and neutrons and for tightly versus loosely bound protons. While tightly bound protons are only 20 percent of the total number of protons and neutrons, they have 80 percent of the nucleus’ kinetic energy. We believe when protons are tightly bound, they are overlapping and you can’t separate their quarks. So when you kick one proton, the other one goes in the opposite direction. Detecting the recoil will give us that unique information.

We need to understand the EMC effect once and for all. For me, it’s a quest. I think we can do it in the next experiment within a year or so. In our field, it’s very rare to answer a specific question definitively. I believe this next measurement is going to be a real breakthrough.

Preparing for the Next Generation: 2021 and Beyond

Even this new experiment won’t resolve all of our questions. The gluon piece is more mysterious. That’s why the DOE is building the Electron Ion Collider at Brookhaven National Laboratory.

Currently, we’re developing the technology for that next generation. We are developing superconducting nanowire detectors that work at very cold temperatures and high magnetic fields, like those needed for the Electron Ion Collider. So far, we’ve found these detectors have much better performance than conventional silicon ones. We are always thinking of the next technology.

If I’ve learned anything from this experience, it’s to encourage young people. I am a strong believer in the next generation. You have to make people passionate about things. I’ve had many students, many of whom are still working with me on projects. I’ve even worked with students of my students – my grand-students.

At the end of the day, I have these collaborators that I helped educate. Those are my kids. I am so happy because in their hearts, they are passionate about these questions. With my students who have worked with me, I built that kind of nucleus around me. That community is going to carry on beyond my effort.