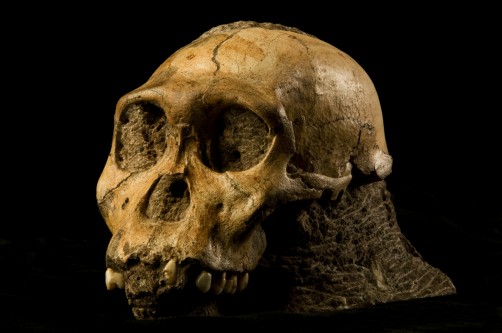 Photo by Brett Eloff, courtesy Lee Berger and the University of the Witwatersrand.

A quirk of nature allowed scientists to scrape plant material out of preserved plaque found on the teeth of two specimens of Australopithecus seidba. University of Arkansas researcher Peter Ungar and his colleagues published their findings in the journal Nature.

Newswise — FAYETTEVILLE, Ark. – A 2 million-year-old mishap that befell two early members of the human family tree has provided the most robust evidence to date of what at least one pair of hominins ate.

A team of researchers including Peter Ungar, Distinguished Professor of anthropology at the University of Arkansas, reports its findings today in the journal Nature.

Almost 2 million years ago, an elderly female and young male of the species Australopithecus sediba fell into a sinkhole, where their remains were quickly buried in sediment. In 2010, anthropologist Lee Berger of the Institute for Human Evolution at the University of the Witwatersrand in Johannesburg, South Africa, and his colleagues described the remains of this newly characterized creature. Now a team of scientists has studied the teeth of these specimens, which proved to have unique properties because of how the hominins died.

“We have a very unusual type of preservation,” Ungar said. “The state of the teeth was pristine.” Since the two individuals were buried underground and quickly encased in sediment, parts of the teeth were even preserved with a pocket of air surrounding them.Because of this, the researchers were able to perform dental microwear analyses of the tooth surfaces and high-resolution isotope studies of the tooth enamel on these well-preserved teeth. In addition, because the teeth had not been exposed to the elements since death, they also harbored another thing not discovered before in early hominins – areas of preserved tartar buildup around the edges of the teeth. In this plaque, the scientists found phytoliths, bodies of silica from plants eaten almost 2 million years ago by these early hominids.

“It’s the first time we’ve been able to look at these three things in one or two specimens,” Ungar said.

Using the isotope analysis, the dental microwear analysis and the phytolith analysis, the researchers closed in on the diet of these two individuals, and what they found differs from other early human ancestors from that period. The microwear on the teeth showed more pits and complexity than most other australopiths before it. Like the microwear, the isotopes also showed that the animals were consuming mostly parts of trees, shrubs or herbs rather than grasses.

The phytoliths gave an even clearer picture of what the animals were consuming, including bark, leaves, sedges, grasses, fruit and palm.

“We get a sense of an animal that looked like it was taking advantage of forest resources,” Ungar said. This kind of food consumption differs from what had been seen in evidence from other australopiths. “They come out looking like giraffes in terms of their tooth chemistry. A lot of the other creatures there were not eating such forest resources.”“These findings tell us a really nice story about these two individuals,” Ungar said. “It’s fascinating that we found something that went into the mouth of these creatures that was still in the mouth of these creatures.”