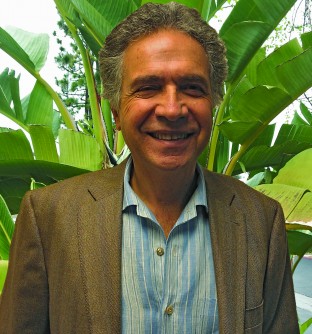 Dr. Armen Goenjia, research professor of psychiatry at the Semel Institute for Neuroscience and Human Behavior at UCLA

Newswise — Why do some persons succumb to post-traumatic stress disorder (PTSD) while others who suffered the same ordeal do not? A new UCLA study sheds light on the answer.

UCLA scientists have linked two genes involved in serotonin production to a higher risk of developing PTSD. Published in the April 3 online edition of the Journal of Affective Disorders, the findings suggest that susceptibility to PTSD is inherited, pointing to new ways of screening for and treating the disorder. “People can develop post-traumatic stress disorder after surviving a life-threatening ordeal like war, rape or a natural disaster,” explained lead author Dr. Armen Goenjian, a research professor of psychiatry at the Semel Institute for Neuroscience and Human Behavior at UCLA. “If confirmed, our findings could eventually lead to new ways to screen people at risk for PTSD and target specific medicines for preventing and treating the disorder.” PTSD can arise following child abuse, terrorist attacks, sexual or physical assault, major accidents, natural disasters or exposure to war or combat. Symptoms include flashbacks, feeling emotionally numb or hyper-alert to danger, and avoiding situations that remind one of the original trauma. Goenjian and his colleagues extracted the DNA of 200 adults from several generations of 12 extended families who suffered PTSD symptoms after surviving the devastating 1988 earthquake in Armenia. In studying the families’ genes, the researchers found that persons who possessed specific variants of two genes were more likely to develop PTSD symptoms. Called TPH1 and TPH2, these genes control the production of serotonin, a brain chemical that regulates mood, sleep and alertness -- all of which are disrupted in PTSD. “We suspect that the gene variants produce less serotonin, predisposing these family members to PTSD after exposure to violence or disaster,” said Goenjian. “Our next step will be to try and replicate the findings in a larger, more heterogeneous population.” Affecting about 7 percent of Americans, PTSD has become a pressing health issue for a large percentage of war veterans returning from Iraq and Afghanistan. The UCLA team’s discovery could be used to help screen persons who may be at risk for developing PTSD. “A diagnostic tool based upon TPH1 and TPH2 could enable military leaders to identify soldiers who are at higher risk of developing PTSD, and reassign their combat duties accordingly,” observed Goenjian. “Our findings may also help scientists uncover alternative treatments for the disorder, such as gene therapy or new drugs that regulate the chemicals responsible for PTSD symptoms.” According to Goenjian, pinpointing genes connected with PTSD symptoms will help neuroscientists classify the disorder based on brain biology instead of clinical observation. Psychiatrists currently rely on a trial and error approach to identify the best medication for controlling an individual patient’s symptoms. Serotonin is the target of the popular antidepressants known as SSRIs, or selective serotonin re-uptake inhibitors, which prolong the effect of serotonin in the brain by slowing its absorption by brain cells. More physicians are prescribing SSRIs to treat psychiatric disease beyond depression, including PTSD and obsessive compulsive disorder. Goenjian’s coauthors included Julia Bailey, Alan Steinberg, Uma Dandekar and Dr. Ernest Noble of UCLA; and David Walling and Devon Schmidt of the Collaborative Neuroscience Network. No external grants supported the study. The Semel Institute for Neuroscience and Human Behavior is an interdisciplinary research and education institute devoted to the understanding of complex human behavior, including the genetic, biological, behavioral and sociocultural underpinnings of normal behavior, and the causes and consequences of neuropsychiatric disorders. In addition to conducting fundamental research, the institute's faculty seeks to develop effective strategies for the prevention and treatment of neurological, psychiatric and behavioral disorder, including improvement in access to mental health services and the shaping of national health policy.