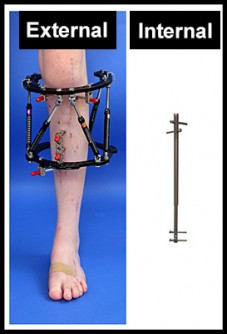 Newswise — Baltimore, MD. – Surgeons at LifeBridge Health’s Rubin Institute for Advanced Orthopedics have performed the first surgery in North America using the latest generation of the PRECICE™ Limb Lengthening System. John Herzenberg, M.D., the director of the Rubin Institute’s International Center for Limb Lengthening (ICLL) and Shawn Standard, M.D., head of Pediatric Orthopedics at the ICLL, inserted the P2 rod into the tibia of a patient at Sinai Hospital earlier this year.

“The PRECICE Limb Lengthening System represented a revolutionary advancement in the field of limb lengthening,” said Herzenberg. “This introduction of the P2 is the next step in this ongoing evolution. We are grateful that we have had the opportunity to be the first institution in North America to perform a surgery using this new device. The PRECICE system has been a great success at the Rubin Institute. Since 2012, the ICLL has performed 100 surgeries using the initial PRECICE. We expect the similar results with the new P2, along with expanded applicability to younger and smaller patients, because the P2 nail is available in a smaller size (8.5 mm diameter) compared to the original PRECICE nail.”

The PRECICE Limb Lengthening System uses a telescopic titanium rod surgically implanted in either the femur (thigh bone) or tibia (shin bone) and an external remote controller to internally lengthen bones in the leg. Inside the rod, a miniature magnetic motor and gear box create the force needed to lengthen the rod. The power to drive the internal motor is supplied by a magnetic field generator that is held on the skin next to the leg several times a day for a few minutes.

“Ellipse Technologies’ PRECICE nail has been a game-changer for our patients. No longer do we have to rely on external fixators for lengthening limbs. The PRECICE internal nail offers patients a more comfortable alternative, with less pain, and less risk of infection, compared to external fixators,” explained Herzenberg.

Limb lengthening is used to treat upper and lower limb length deformities. Through this process, new bone and soft tissues are gradually grown through a combination of surgery and either an internal or external fixator. This new growth is called distraction osteogenesis. Bone and soft tissue regenerate when they are slowly pulled apart at a rate of approximately 1 mm per day.

The ICLL is one of the world’s leading centers for the treatment of children and adults with upper and lower limb length deformities. Children and adults from all 50 states and more than 50 countries have traveled to the ICLL to receive comprehensive orthopedic treatment.