Newswise — The True´s beaked whale is a deep-diving mammal so rarely seen that it often defies recognition at sea by researchers. As a result, we have little data about its distribution, abundance and calving rate – information essential for its conservation. Scientists have now found a new coloration pattern in the species and obtained the first images of a calf along with the first underwater video of these whales – helping to reveal the secrets of this species. Beaked whales are members of the family Ziphiidae, the second largest family of cetaceans (which includes whales, dolphins and porpoises), however many of the 22 species of beaked whales are among the least known or understood mammals in the world. This lack of knowledge is highlighted by the fact that three new species of beaked whales have been discovered in just the last two decades.

To see beaked whales at sea is such a rare event that many researchers devoting their life to study cetaceans have never seen one. Living in deep waters, usually far offshore, these creatures spend some 92% of their time underwater, invisible to humans. Beaked whales break diving records, feeding at depths that can reach three kilometers and last up to 2 hours. After these diving feats, they rest, performing shorter and shallower dives with brief surfacing intervals. These behaviors, together with the fact that beaked whales live in small groups, are not usually attracted to boats, and do not perform aerial acrobatics as much as dolphins, mean that beaked whales are not easy to detect at sea. Moreover, many beaked whales have variable color patterns that may be shared by other ziphiid species, challenging the identification of beaked whales at the species level during sea encounters, when often only a short glimpse of their body is achieved. Although True´s beaked whales occur in the North Atlantic and in the Southern Hemisphere, there is a surprisingly large gap in their distribution between these regions. This gap may be real, or might be an artefact of our lack of data. In a paper published today, scientists show that the Azores and to a lesser extent the Canary Islands (areas which represent the southern limit of the known distribution of True´s beaked whales in the North Atlantic) may actually be a hot-spot for the study of True´s beaked whales. The steep bathymetry of these oceanic archipelagos mean that deep waters occur close to shore, facilitating studies of deep-water dwelling species.

The study gathered stranding data and sightings performed by scientists, whale watch companies and educational teams in Azores and Canary Islands. These data include the first underwater video of the species and photos of a very young calf, as well as a stranded whale confirmed genetically as a True´s beaked whale but showing a coloration pattern never observed before in this species. These data are highly valuable to learn more about recognizing True´s beaked whales at sea, something which is essential for studies of their distribution and abundance. It is also the first time that this species has been identified with molecular data in this region, allowing definitive links between coloration and species to be made.

Beaked whales are vulnerable to human impacts: mass strandings occur in relation to naval exercises using intense sonar signals to detect submarines. Also, whales appear on the beach with plastic inside their stomach, entangled in fishing gear or suffering cuts from boat propellers. If these impacts happen offshore and whales don´t reach the beach, we cannot detect them. Accurate species identification therefore allows us to learn more about where animals are and how many they are, information which allows us to monitor the status of the populations and act for their conservation.

Media Pack Materials All the media is available in a zip file, downloadable at: (http://static.peerj.com/pressReleases/2017/03/media-aguilar.zip - 98 Mb)

VIDEO: There is a high quality video (45 seconds) in the ‘media pack’ zip file (http://static.peerj.com/pressReleases/2017/03/media-aguilar.zip - 98 Mb). The same video is available at YouTube at https://youtu.be/Km5hiC2bESA. This represents the first ever video footage of these whales underwater.   Video Title: First underwater video of True´s beaked whales Available at YouTube: https://youtu.be/Km5hiC2bESA Text: This group was formed by three adult or sub-adult whales. Social behavior of this species is still unknown but the group seemed to dive in a coordinated manner, as has been observed in other species of beaked whales. Credit: Roland Edler.

PDF of this Press Release: http://static.peerj.com/pressReleases/2017/03/Press-Release-Aguilar.pdf

Link to the Press Preview of the Original Article (this link should only be used BEFORE the embargo ends): http://static.peerj.com/press/previews/2017/03/3059.pdf Note: do NOT use this link in your story. This is an author proof and so may change slightly before publication.

Link to the Published Version of the article (quote this link in your story – the link will ONLY work after the embargo lifts): https://peerj.com/articles/3059 your readers will be able to freely access this article at this URL.

PeerJ has an Editorial Board of over 1,400 respected academics, including 5 Nobel Laureates. PeerJ was the recipient of the 2013 ALPSP Award for Publishing Innovation. PeerJ Media Resources (including logos) can be found at: https://peerj.com/about/press/ 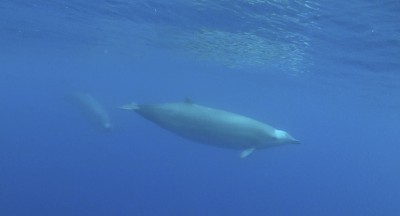 Caption: Breaching True´s beaked whales: True’s beaked whales sometimes breach and this gives observers a better opportunity to identify the species. Here, the two little white dots in the front of the beak show that this animal is a male True´s beaked whale. Females do not have erupted teeth and males of other similar beaked whale species have the teeth in different positions along the mouthline. 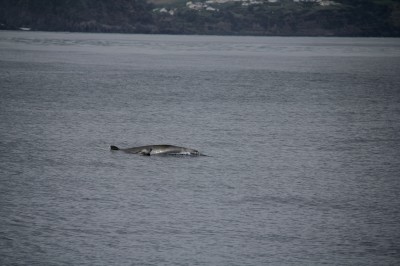