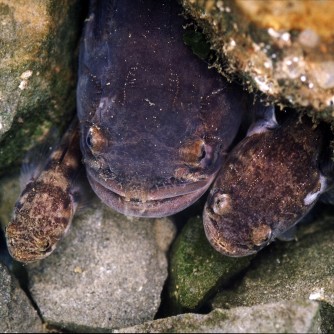 Type I male midshipman fish, center, build nests under rocks in the intertidal zone from where they acoustically court females for spawning. Type II “sneaker” males, left and right, sneak into the nest to steal fertilizations from the type I male.

Newswise — ITHACA, N.Y. – Genes in an area of the brain that is relatively similar in fish, humans and all vertebrates appear to regulate how organisms coordinate and shift their behaviors, according to a new Cornell University study.

The paper on plainfin midshipman fish, published Jan. 18 in the Proceedings of the Royal Society B, highlights a suite of genes in the preoptic area – anterior hypothalamus (POA-AH) that are expressed during behaviors relating to reproduction, parental care and aggression.

The genes in this area of the brain, some of which have been implicated in human social behaviors, play a role in the ability of these fish to be flexible in their own reproductive-related social behaviors.

“We begin to better understand how changing patterns in gene expression relate to short-term changes in behavioral state,” said Andrew Bass, senior associate dean and professor of neurobiology and behavior in the College of Arts and Sciences. Bass is the paper’s senior author; Joel Tripp, a graduate student in Bass’ lab, is the paper’s first author.

Plasticity, or flexibility, in social behaviors is crucial for survival and reproduction. When it comes to reproductive success, it’s important that individuals employ alternate strategies when they aren’t equipped to defend a territory and court a mate.

There are two types of male plainfin midshipman fish, which makes it an ideal model for studying plasticity in reproductive behaviors. Type I males excavate and defend nests, make humming sounds to court females and parent their young. Type II males are smaller, reach sexual maturity earlier and do not share in the reproductive behaviors seen in type I males. Instead, type II males reproduce through cuckoldry – sneaking into the nests of type I males and fertilizing eggs. This is a risky endeavor, as larger type I males will chase them out. The type II males do not hum, as they lack the physiological capacity to make this signal.

Type II males are fixed in their cuckolding behavior and are never going to set up a nest and court females with a hum, Bass said. One the other hand, type I males are flexible; they may resort to cuckoldry when they first reach sexual maturity and are still too small to compete with larger type I males. When they grow larger, or have a chance to move into their own nest, they do so.

In the study, the researchers set up fish in outdoors tanks that simulate natural conditions. When a male snuck into a nest or hummed to court a female, the researchers quickly removed that male and sequenced genetic material from its brain.

“You want to see what the expression levels are with genes as close as possible to the time point at which you are observing the behavior,” said Bass.

Tripp and Bass looked at gene expression rates in the fish’s POA-AH. They found differences between the courting type I males and the cuckolding type II males; however, the genes expressed in type I “sneaker” males more closely resembled type II males than type I males involved in courting.

“The sneaking behavior expressed between young type I males and type II males was the same, and sure enough, they showed similar patterns of gene expression,” Bass said. The finding is surprising considering the two types have very different development histories.

In future work, the researchers will look further at candidate genes identified that are likely the regulators of reproductive and social plasticity and how they work, Tripp said.

The study was funded by the National Science Foundation, the Cornell University Center for Vertebrate Genomics and the Department of Neurobiology and Behavior.

Proceedings of the Royal Society B, Jan-2018