Flat Boron Is a Superconductor 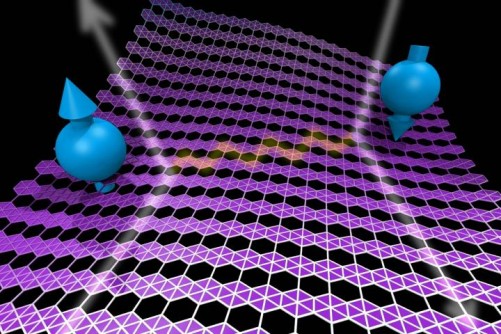 Electrons with opposite momenta and spins pair up via lattice vibrations at low temperatures in two-dimensional boron and give it superconducting properties, according to new research by theoretical physicists at Rice University. 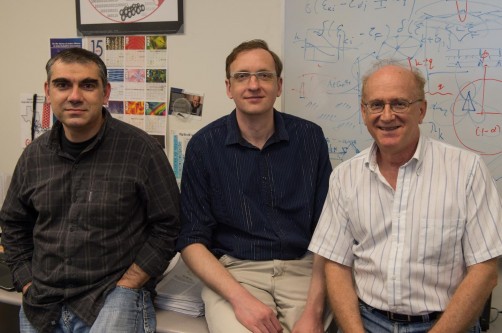 Rice University scientists have determined that two-dimensional boron is a natural low-temperature superconductor. It may be the only 2-D material with such potential. From left: Evgeni Penev, Alex Kutana and Boris Yakobson.

Newswise — HOUSTON - (March 31, 2016) - Rice University scientists have determined that two-dimensional boron is a natural low-temperature superconductor. In fact, it may be the only 2-D material with such potential.

Rice theoretical physicist Boris Yakobson and his co-workers published their calculations that show atomically flat boron is metallic and will transmit electrons with no resistance. The work appears this month in the American Chemical Society journal Nano Letters.

The hitch, as with most superconducting materials, is that it loses its resistivity only when very cold, in this case between 10 and 20 kelvins (roughly, minus-430 degrees Fahrenheit). But for making very small superconducting circuits, it might be the only game in town.

The basic phenomenon of superconductivity has been known for more than 100 years, said Evgeni Penev, a research scientist in the Yakobson group, but had not been tested for its presence in atomically flat boron.

"It's well-known that the material is pretty light because the atomic mass is small," Penev said. "If it's metallic too, these are two major prerequisites for superconductivity. That means at low temperatures, electrons can pair up in a kind of dance in the crystal."

"Lower dimensionality is also helpful," Yakobson said. "It may be the only, or one of very few, two-dimensional metals. So there are three factors that gave the initial motivation for us to pursue the research. Then we just got more and more excited as we got into it."

Electrons with opposite momenta and spins effectively become Cooper pairs; they attract each other at low temperatures with the help of lattice vibrations, the so-called "phonons," and give the material its superconducting properties, Penev said. "Superconductivity becomes a manifestation of the macroscopic wave function that describes the whole sample. It's an amazing phenomenon," he said.

It wasn't entirely by chance that the first theoretical paper establishing conductivity in a 2-D material appeared at roughly the same time the first samples of the material were made by laboratories in the United States and China. In fact, an earlier paper by the Yakobson group had offered a road map for doing so.

That 2-D boron has now been produced is a good thing, according to Yakobson and lead authors Penev and Alex Kutana, a postdoctoral researcher at Rice. "We've been working to characterize boron for years, from cage clusters to nanotubes to planer sheets, but the fact that these papers appeared so close together means these labs can now test our theories," Yakobson said.

"In principle, this work could have been done three years ago as well," he said. "So why didn't we? Because the material remained hypothetical; okay, theoretically possible, but we didn't have a good reason to carry it too far.

"But then last fall it became clear from professional meetings and interactions that it can be made. Now those papers are published. When you think it's coming for real, the next level of exploration becomes more justifiable," Yakobson said.

Boron atoms can make more than one pattern when coming together as a 2-D material, another characteristic predicted by Yakobson and his team that has now come to fruition. These patterns, known as polymorphs, may allow researchers to tune the material's conductivity "just by picking a selective arrangement of the hexagonal holes," Penev said.

He also noted boron's qualities were hinted at when researchers discovered more than a decade ago that magnesium diborite is a high-temperature electron-phonon superconductor. "People realized a long time ago the superconductivity is due to the boron layer," Penev said. "The magnesium acts to dope the material by spilling some electrons into the boron layer. In this case, we don't need them because the 2-D boron is already metallic."

Without the availability of a block of time on several large government supercomputers, the study would have taken a lot longer, Yakobson said. "Alex did the heavy lifting on the computational work," he said. "To turn it from a lunchtime discussion into a real quantitative research result took a very big effort."

The paper is the first by Yakobson's group on the topic of superconductivity, though Penev is a published author on the subject. "I started working on superconductivity in 1993, but it was always kind of a hobby, and I hadn't done anything on the topic in 10 years," Penev said. "So this paper brings it full circle."

This news release can be found online at http://news.rice.edu/2016/03/30/flat-boron-is-a-superconductor/

http://news.rice.edu/files/2016/03/0402_SUPER-1-web-1ysmuqe.jpgElectrons with opposite momenta and spins pair up via lattice vibrations at low temperatures in two-dimensional boron and give it superconducting properties, according to new research by theoretical physicists at Rice University. (Credit: Evgeni Penev/Rice University)

Rice University scientists have determined that two-dimensional boron is a natural low-temperature superconductor. It may be the only 2-D material with such potential. From left: Evgeni Penev, Alex Kutana and Boris Yakobson. (Credit: Jeff Fitlow/Rice University)

Located on a 300-acre forested campus in Houston, Rice University is consistently ranked among the nation's top 20 universities by U.S. News & World Report. Rice has highly respected schools of Architecture, Business, Continuing Studies, Engineering, Humanities, Music, Natural Sciences and Social Sciences and is home to the Baker Institute for Public Policy. With 3,910 undergraduates and 2,809 graduate students, Rice's undergraduate student-to-faculty ratio is 6-to-1. Its residential college system builds close-knit communities and lifelong friendships, just one reason why Rice is ranked No. 1 for best quality of life and for lots of race/class interaction by the Princeton Review. Rice is also rated as a best value among private universities by Kiplinger's Personal Finance. To read "What they're saying about Rice," go to http://tinyurl.com/AboutRiceUniversity.