Flaw in ‘Secure’ Cloud Storage Could Put Privacy at Risk 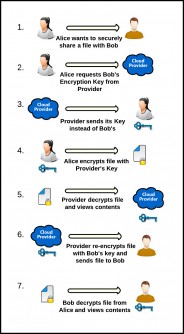 The researchers' illustration of how the security weakness could be exploited by a cloud computing storage provider.

Newswise — Johns Hopkins computer scientists have found a flaw in the way that secure cloud storage companies protect their customers’ data. The scientists say this weakness jeopardizes the privacy protection these digital warehouses claim to offer. Whenever customers share their confidential files with a trusted friend or colleague, the researchers say, the storage provider could exploit the security flaw to secretly view this private data.

The flaw is detailed in a technical paper posted online here.

The lead author is Duane C. Wilson, a doctoral student in the Department of Computer Science in the university’s Whiting School of Engineering. The senior author is his faculty adviser, Giuseppe Ateniese, an associate professor in the department. Both are affiliated with the Johns Hopkins University Information Security Institute.

Their research focused on the secure cloud storage providers that are increasingly being used by businesses and others to house or back up sensitive information about intellectual property, finances, employees and customers. These storage providers claim to offer “zero-knowledge environments,” meaning that their employees cannot see or access the clients’ data. These storage businesses typically assert that this confidentiality is guaranteed because the information is encrypted before it is uploaded for cloud storage.

But the Johns Hopkins team found that complete privacy could not be guaranteed by these vendors. “Our research shows that as long as the data is not shared with others, its confidentiality will be preserved, as the providers claim,” Wilson said. “However, whenever data is shared with another recipient through the cloud storage service, the providers are able to access their customers’ files and other data.”

The problem, Wilson said, is that privacy during file-sharing is normally preserved by the use of a trusted third party, a technological “middle-man” who verifies the identify of the users who wish to share files. When this authentication process is finished, this third party issues “keys” that can unscramble and later re-encode the data to restore its confidentiality.

“In the secure cloud storage providers we examined,” Wilson said, “the storage businesses were each operating as their own ‘trusted third party,’ meaning they could easily issue fake identity credentials to people using the service. The storage businesses could use a phony ‘key’ to decrypt and view the private information, then re-encrypt it before sending it on to its intended recipient.”

Wilson added, “As a result, whenever data is shared with another user or group of users, the storage service could perform a man-in-the-middle attack by pretending to be another user or group member. This would all happen without alerting the customers, who incorrectly believe that the cloud storage provider cannot see or access their data.”

These storage services generally do not share the details of how their technology works, so Wilson and Ateniese substantiated the security flaw by using a combination of reverse engineering and network traffic analysis to study the type of communication that occurs between a secure cloud storage provider and its customers.

The researchers pointed out that their study focused only on three storage providers that claimed their customers’ data would remain completely confidential. Other file-sharing services, such as Dropbox and Google Drive, make no pledge of privacy. Instead, they say that after a user's data is uploaded, it is encrypted with keys that are owned by the file-sharing service.

To solve the security flaw, the researchers recommend that the arrangements between customers and secure storage providers be revised so that an independent third party serves as the file-sharing “middle-man,” instead of the storage company itself.

“Although we have no evidence that any secure cloud storage provider is accessing their customers’ private information, we wanted to get the word out that this could easily occur,” said Ateniese, who supervised the research. “It’s like discovering that your neighbors left their door unlocked. Maybe no one has stolen anything from the house yet, but don’t you think they’d like to know that it would be simple for thieves to get inside?”