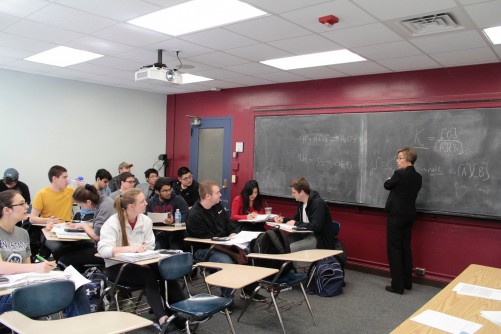 Stephanie Velegol decided to try flipping her classroom in 2010 after noticing a problem with student learning retention in the traditional classroom.

Newswise — UNIVERSITY PARK, Pa. — Given the difficult-to-digest subject matter in many STEM classrooms, educators have customarily relied on traditional lecture-based educational methods where they spend class time walking through content and then assign homework problems to supplement that learning.

Liberal arts classrooms, on the other hand, often invert that structure. They task students with learning the material from a book outside the classroom and then turn class time into active discussion periods where they expand and develop what they’ve read.

“It’s difficult for an engineering student to extract the technical information from a book on their own,” said Stephanie Butler Velegol, instructor in environmental engineering. “Students need to hear the problem-solving out loud; they need to hear the way the professor works through the solution to the problem.”

The issue with the traditional lecture-based approach in STEM education is that even with capable and committed faculty, the method just doesn’t engage some students and keep them interested. Even when it is successful, educators find they have a hard time interacting with students when they’re constantly behind the lectern.

That’s where the flipped classroom comes in. In a flipped classroom, students gain technical knowledge through online videos that prepare them to participate in in-class activities, which may include problem-solving, discussions, brainstorming, design work, guest speakers, or field trips.

“The goal is to increase active learning, which has been shown to have a strong impact on student performance,” Velegol said.

By moving the lecture time out of the classroom, class time can be used for any number of activities that engage the student.

Velegol knows firsthand what the flipped classroom can do for STEM education. She has been flipping since 2010 after noticing a problem with student learning retention in the traditional classroom.

While teaching her Introduction to Environmental Engineering course using lecture-based methods, Velegol noticed students were often coming to her office hours with questions regarding the homework problems, even though she had already covered the material in class. When their questions applied directly to a specific problem, they seemed to better understand the material and were then able to complete the problems successfully. In addition, Velegol noticed that the students were able to use what they learned to teach each other, which is the highest level of learning comprehension.

Velegol realized that this was the kind of interaction she wanted to recreate in the classroom.

“Students are often just staring at me or staring down at their desks, or they’re asleep,” Velegol said. “They're not engaging.”

So Velegol decided to flip her class around.

“The first time I flipped my class, I made a lot of mistakes,” she said.

In the first version, Velegol recorded her live lectures during the semester to create the videos. The students were then required to watch about three hours of video per week and come to class and work on class problems in addition to the homework problems. This resulted in students feeling frustrated by so much work.

So Velegol tried a second version. This time, the lecture material was created in a studio. Individual videos were about 10 minutes in length and each week the students watched about 100 minutes of video. In addition, the class time was used for the homework due at the end of the week. This version was more effective and the students became more engaged.

Velegol has gone through three or four versions since she first began and is becoming more successful each time as she learns more about the needs of students in the active learning environment. In an effort to encourage more student attendance and participation, she now uses class time to engage students in multiple-choice questions using “clickers” that immediately collect the data and display it in bar graphs for the entire class and other in-class problems that are due at the end of the period.

Velegol said that, although a few students aren’t comfortable with it, the majority of students favor the flipped classroom.

In a study published in 2015 titled “The Evolution of a Flipped Classroom: Evidence-Based Recommendations,” (Advances in Engineering Education), Velegol, along with Sarah E. Zappe, director of assessment and instructional support for the Leonhard Center for Teaching Excellence, and Emily Mahoney, former civil engineering undergraduate student, reported that 77 percent of the students stated that they would prefer to take a flipped course with the instructor. The major reasons included flexibility in learning, being able to re-watch the lectures, and interacting with peers and faculty in order to have homework questions answered in class.

Though the research has not shown marked improvement in test scores, Velegol has seen a great deal of other benefits, as well.

Overall, she said, the research shows there is a significant improvement in classroom climate, especially in student involvement and differentiated instruction. She’s also seen advances in self-efficacy and student engagement.

“Self-efficacy and classroom climate lead directly to motivation to learn, so whether or not the students are doing better on the final exam, they're more motivated to learn the material,” Velegol said.

Velegol will present these findings at the American Society for Engineering Education conference in New Orleans later this month.

Now that Velegol has become comfortable with flipping her classrooms, she is spreading her knowledge to others.

Flipping classrooms is a great concept, Velegol said, but there aren’t clear-cut instructions as to how to implement it properly.

“I have talked to people who have flipped wrong and have gotten really frustrated with it,” Velegol said. “My goal is to prevent this from happening.”

Velegol recently helped develop a Massive Open Online Course (MOOC) titled, “To Flip Or Not To Flip — Discover the flipped classroom methodology,” which was a collaborative effort between METID, the service of Polytechnic University of Milan in Italy devoted to e-learning and e-collaboration, and the Digital University of Engineering and Technology in France.

The four-week course helps educators learn the basics, explore shared experiences, identify key issues, and apply that knowledge to their own courses.

Velegol participated in the MOOC by filming herself answering a specific set of questions provided by the MOOC’s developers. The videos from Velegol and five other educators around the world were then posted throughout the MOOC as experiential guides for those learning to flip their own classrooms.

Velegol has also paired up with the Leonhard Center for Enhancement of Engineering Education to give a number of workshops throughout the country on flipping classrooms.

At the end of the day, though, her favorite part about flipping classrooms is the increased interaction with students.

“There’s this saying that you can either be the 'sage on the stage' or the 'guide on the side,'” she said. “In a flipped classroom, anytime you do active learning, you're moving yourself off the stage to a guide on the side, and to me, it's more fun to build those relationships.”