Central and South Florida Much More Optimistic than North Florida 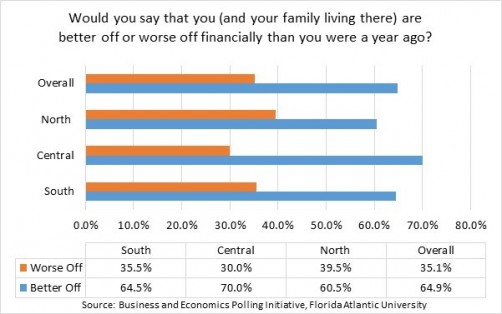 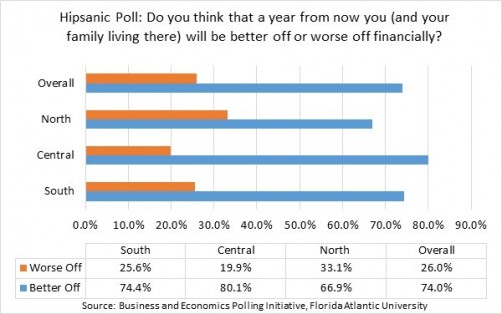 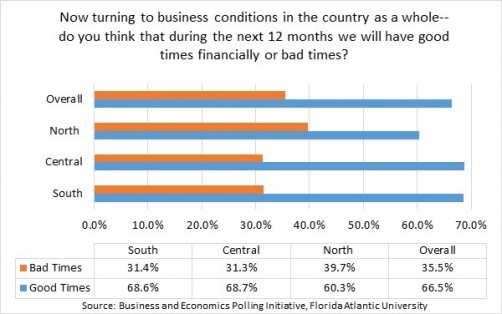 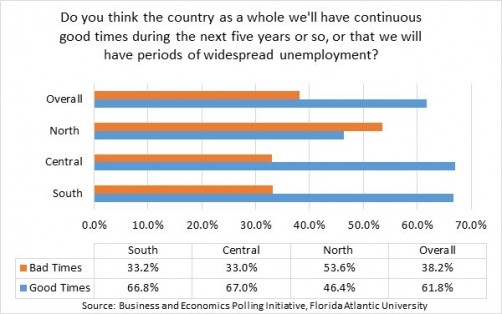 Newswise — A majority of Hispanics in Florida say they’re better off financially than they were a year ago and expect the good times to continue for themselves and business in the United States, according to the latest survey conducted by the Florida Atlantic University Business and Economics Polling Initiative (FAU BEPI) in the College of Business.

The best economic conditions in Florida for Hispanics are in the central and southern parts of the state, while the northern region is economically depressed. The poll also found that Hispanics who are Mexican or Chicano are significantly worse off economically than Cubans or Hispanics of other national origins.

Hispanics also are ready to spend, with 69 percent saying now is a good time to buy major household items. Hispanics in the central part of the state again topped the poll on this question, with 71.4 saying yes, compared with 69.4 in the southern region and 64.7 percent in the northern region. Hispanics are optimistic about the future as 74 percent from across the state believe that things will continue to be better a year from now. When broken down by region, the numbers again are highest in central Florida, where 80.1 feel they will be better off a year from now, followed by south Florida at 74.4 percent and north Florida at 66.9 percent.

Hispanics by nearly a 2-to-1 margin believe that business conditions in the U.S. as a whole will be strong in the next year, including 68.7 percent of Hispanics in central Florida, 68.6 percent in south Florida and 60.3 in north Florida. Looking further ahead, 62 percent of Hispanics expect economic good times to continue for the next five years. Central Florida (67 percent) and south Florida (66.8 percent) posted the top numbers on this question. Hispanics in north Florida were much less optimistic, with 53.6 percent expecting periods of widespread unemployment or depression.

“Overall Hispanics in Florida appear to feel better about thier personal finances and the economy, thus providing a boost to retailers, restaurants and entertainment sector in the Sunshine State,” said Monica Escaleras, Ph.D., director of BEPI.The survey was conducted in Florida from Jan. 1 through June 30. The polling sample consisted of 500 Hispanics with a margin of error of +/- 4.33 percent and a 95 percent confidence level.

About FAU BEPI: The Florida Atlantic University Business and Economic Polling Initiative Conducts surveys on business, economic, political and social issues with a focus on Hispanic attitudes and opinions at regional, state and national levels via planned monthly national surveys. The initiative subscribes to the American Association of Public Opinion Research and is a resource for public and private organizations, academic research and media outlets. In addition, the initiative is designed to contribute to the educational mission of the University by providing students with valuable opportunities to enhance their educational experience by designing and carry out public opinion research.