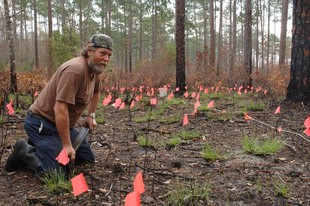 Veteran worm grunter Gary Revell surrounded by flags that mark places where earthworms have emerged in response to the vibrations he is creating.

Newswise — When biologist Ken Catania heard about the peculiar practice of worm grunting practiced in the Apalachicola National Forest in the Florida Panhandle one of his first thoughts was an observation made by Charles Darwin.

Worm grunting involves going into the forest, driving a wooden stake into the ground and then rubbing the top of the stake with a long piece of steel called a rooping iron. This makes a peculiar grunting sound that drives nearby earthworms to the surface where they can be easily collected for fish bait.

Despite a lot of speculation, worm grunters don't really know why the technique works. But Catania, an associate professor of biological sciences at Vanderbilt who studies moles, thought that the explanation might lie in Darwin's remark: "It is often said that if the ground is beaten or otherwise made to tremble worms will believe that they are pursued by a mole and leave their burrows." So this spring he traveled down to Florida and performed a number of experiments to test this hypothesis with the cooperation of veteran worm grunters Gary and Audrey Revell. His conclusion, that the humans are driving the worms to the surface by unknowingly mimicking the sound of digging moles, is reported in the Oct. 14 issue of the Public Library of Science ONE.

The technique is practiced in a number of parts of the southeastern United States, under various names including worm fiddling, snoring and charming, but it reached its apex in the 1960's in Apalachicola when hundreds of people grunted for worms until the U.S. Forest Service began permitting the previously unregulated practice out of concern for the impact the industry was having on the native worm population. Now far fewer people practice this technique. The Revells are two of the few who still make much of their living from worm grunting.

In his preliminary research Catania found some other interesting clues. One was the observation by the famous Dutch ethologist Nikolaas Tinbergen that one species of gull performs a "foot paddling behavior" that appears to bring up earthworms to the surface, a response he attributed to an innate reaction that enables the worms "to escape their arch enemy the mole." More recently the American naturalist John Kaufmann who studied wood turtles reported that they engage in a stomping behavior that brings earthworms to the surface so they can eat them.

Catania's first step was to determine whether moles live in the areas where the worm grunters practice their trade. He found that eastern American moles (Scalopus aquaticus Linnaeus) were plentiful. The Revells took him to the best places in the forest, where he found more than 200 mole tunnels in the vicinity of 94 holes left by worm grunters.

Once that fact was established, they examined the practice of worm-grunting. Apalachicola is the home for a native species of earthworm Diplocardia mississippiensis that are prized for bait because of their large size. One of Catania's first experiments was to measure the worms' response to worm grunting. He used geophones to record the sub-surface vibrations that the method created. Catania discovered that a single worm grunting session forced hundreds of earthworms to the surface within 12 meters (13 yards) of the stake. "This makes it possible for an experienced worm grunter to collect thousands of worms in a day," Catania says.

In one case, instead of collecting the worms, the biologist observed their behavior after they surfaced. After traveling a significant distance on the surface they began searching for a place to burrow back into the ground: a process that took anywhere from 10 minutes to over an hour. "This represents a major risk to the earthworms because they are vulnerable to predation and to dehydration," Catania observes.

The next step was to determine how the native earthworms respond to the presence of moles. He built a small test box (20x25x19 cm) and filled it with 50 earthworms. The box had a tube in the side that allowed him to introduce a mole to the mix. As soon as a mole began tunneling into the test box, dozens of earthworms popped to the surface, wriggling at top speed with many even crawling over the top of the box.

"Eastern moles don't come to the surface when they are foraging, so fleeing to the surface provides the worms both immediate safety and the most efficient means for getting away from them," Catania says.

He repeated the experiments in two larger outdoor enclosures (1.2 square meters or 13 square yards) with similar results in this more natural setting. He did find one difference in the worms response to grunting and mole digging: When the worms surfaced in response to grunting, they headed every which way; when they surfaced in response to the sound of a mole digging, most of them began crawling away from the mole's position.

The biologist also used the small test box to explore another popular explanation for the worm grunting effect: That it imitates the vibrations caused by heavy rainfall, bringing the earthworms to the surface to keep from drowning. After placing 50 of the earthworms in the test box he put it under a sprinkler for an hour. The system simulated a heavy downpour that produces one inch of rain per minute. In five trials, a total of only three worms came to the surface. When the dirt in the box was totally saturated, he removed the earthworms and found that they appeared completely healthy.

"This made the rain hypothesis questionable," he says. But the more definitive test of rain was to construct a large outdoor bin, fill it with 300 worms, and wait for thunderstorms. Even in very heavy downpours, only 1-2 worms came out in an hour. That seemed to rule out the hypothesis that worm grunting mimics the sound of rainfall.

Finally, Catania compared the vibrations produced by worm grunting and those of a mole burrowing. "The moles are quite noisy. Often you can hear the sounds of a mole digging in the wild from a few feet away," he says. Analyzing the geophone recordings of the two types of sound, he found that the worm grunting vibrations were more uniform and concentrated near 80 Hz whereas the moles produce a wider range of vibrations that peak at around 200 Hz. Nevertheless, there is a considerable overlap between the two.

According to Catania, one of the most interesting aspects of his results is the fact that the worm grunters, like the foot-paddling gulls and stomping turtles, appear to be benefiting from what evolutionary biologist Richard Dawkins has termed the "rare enemy effect." The moles, which can eat up to their own weight in worms each day, are one of the worm's most serious predators. It seems that human collections have a much lower impact on the worm population. So the worms have not changed their behavior as a result of the earth grunters' activity. There are so many moles in Apalachicola that a worm's best strategy is still to flee to the surface whenever there is a strong vibration. Usually it means there is a mole around, and it's the unlucky ones that meet the rarer human predators, and end up on a fishing line.

The research was funded by a MacArthur Foundation fellowship and a National Science Foundation CAREER award.