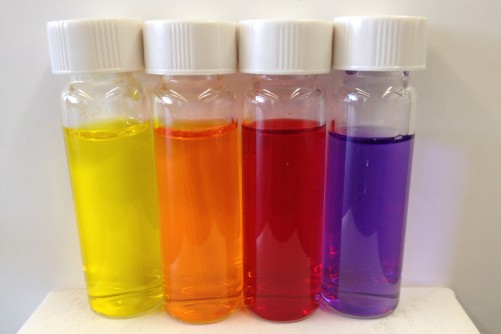 Food dyes like these give food bright colors, and could also potentially act as embedded sensors for food consistency in products such as yogurt.

Newswise — WASHINGTON, D.C., February 11, 2015 -- Food dyes can give cakes, candy and sodas brilliant colors of the rainbow. Now a team of food scientists at Rutgers University in New Jersey has found that food coloring may be able to play more than its traditional esthetic role in food presentation.

The researchers are investigating whether common food dyes, some with colorful name like Sunset Yellow and Brilliant Blue, could act as optical probes of the quality of edible goods. Their initial results show that the fluorescence of five common food colors increases as the viscosity of the surrounding fluid increases – meaning the dyes could potentially act as embedded sensors for food's physical consistency in products such as yogurt or strawberry milk.

Testing the consistency of foods is important because consumers expect products to look and taste the same each time they buy them, and changes in physical consistency could also be indicators of bigger problems like spoilage, the researchers say. The researchers will present their results at the 59th annual meeting of the Biophysical Society, held Feb. 7 – 11 in Baltimore, Md. Measuring light emission from fluorescent particles is a standard scientific technique to probe a material's properties without destroying it. But could the technique work on food? Many fluorescent dyes are toxic or expensive, making them unfit for human consumption and ruling them out for use as food quality probes.

The Rutgers researchers wondered if the edible colors already added to many food products could act as fluorescent probes.

"Fluorescent probes have been used in many applications, but the idea of using food colors for this purpose is new," said Sarah Waxman, an undergraduate student who is working on a research project to study the fluorescent properties of food dyes in the lab of Rutgers food scientist Richard Ludescher.

The team mixed the dyes in solutions of varying consistencies. Some solutions were made with pure water while others included components such as sugar or glycerol, a viscous liquid often used in pharmaceuticals. The researchers changed the thickness of the solutions by altering their temperature and composition, and then measured the fluorescent characteristics of the dyes under the varying conditions.

They found two main results that suggest food colors could potentially work as food quality probes. Firstly, they found that all five dyes fluoresce at a significantly different color than the light that is used to excite them or the fluorescence of other components in the environment, meaning the emitted signal could be easily distinguished from the background. Secondly, they found that although the food colors emitted practically no light when mixed in pure water, the light intensity increased as the solutions thickened.

The increased fluorescence could be due to the way molecules move differently in different liquids, the researchers explained. In pure water, dye molecules are free to twist, but when the motion of the molecules is constrained in a thicker liquid, energy can't escape through as many mechanical pathways – meaning more energy is re-emitted in the form of fluorescent light. The change in the dyes' fluorescence could therefore give clues about the consistency and molecular arrangement of the fluid surrounding the dye particles, Waxman said.

"A viscometer, which is a typical instrument to test the thickness of food, requires separating and ultimately discarding a large sample size and could report distorted numbers due to factors like the slippage of layers in the fluid," Waxman said. "Using food dyes, which are already present in many food products, as probes could be a less invasive and more accurate way to test food's physical properties."

Funding: This research was funded by the USDA National Institute of Food and Agriculture, Improving Food Quality Program–A1361.