Focus on the Work and the People, Not the Title: Former ModCloth CEO on Forging a Career With Purpose 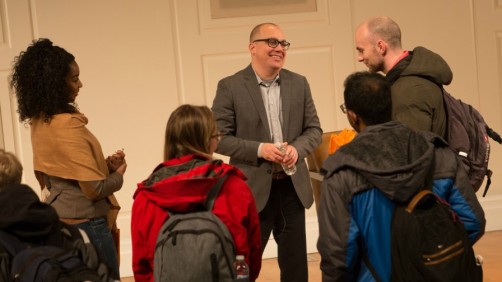 Matt Kaness (MBA '02) encouraged Darden students to find the intersection of what they love and what they are great at.

It has been an unexpected journey for someone whose “dream job” growing up was to toil away in Washington, D.C., as a patent attorney.

Speaking to University of Virginia Darden School of Business students at a Leadership Speaker Series event, Kaness recounted his unlikely career journey and the pivotal role the Darden School played and continues to play in his life.

It was a connection that almost didn’t happen. After a short stint in the patent office convinced Kaness that patent law wasn’t his professional calling, he applied to business schools to pursue his MBA. Kaness said he was initially accepted by none of his top choices, but with a little cajoling was able to move off the Darden waitlist and into the Class of 2002.

An engineer by training who had never taken a business course, Kaness said he worked hard to bring himself up the level of his peers. He encouraged Darden students to look for environments where they would be similarly challenged.

“If you can join a place where you are below the average, consider yourself really lucky,” Kaness said. “Darden brought me up to a level that I aspired to get to.”

Those aspirations came with adversity, however. After squeaking into Darden, Kaness claimed he went “0 for 40” on internship interviews before landing a positon with Colfax, an industrial manufacturer he knew almost nothing about, but proved to be a fruitful launch-pad for his career.

Kaness said such experiences were good training for what would become a recurring career trope of reaching for big goals and becoming comfortable with the failures that comes with the journey.

A subsequent position with the management consulting firm PRTM resulted in the opportunity to work with Burton Snowboards, where Kaness served as a product and operations consultant and “fell in love with lifestyle brands.”

The opportunity came about in part because Kaness had long since given himself permission to move horizontally — from engineering to patent law to industrial manufacturing to operations consulting to consumer products — as he searched for the ideal blend of challenge and passion.

“Each time I made a move, I kept trying to get closer to where I could become great at something and do what I loved,” Kaness said. “Then, when I found it, I wanted to go vertical.”

Kaness did so by joining the clothing and lifestyle company Urban Outfitters Inc., where he was hired by the founder in early 2007 as a strategic planning manager, a title bestowed on him despite a lack of previous professional experience in a strategy function. He quickly saw where he could add value outside of his corporate role and pushed through initial resistance as he proved himself to the company’s operating leadership.

Although slightly unnerving at the time, in hindsight it reinforced a lesson Kaness shared with Darden students.

“When you get to the point where you stop caring about the title and you just care about the work and people, it opens up a world of possibility, and people will respond in kind,” Kaness said.

After eight years at the company, Kaness said he resolved that he was “done apprenticing,” and ready to truly lead a company.

Kaness recalled a moment of “self-realization” after speaking with Weiss, in which he determined that he would set a high bar for what kind of company he wanted to run, and with his family’s blessing, attempt to check three of three boxes in the categories of company, role and location.

Kaness found the right situation: president and CEO of the San Francisco-based vintage fashion e-commerce company ModCloth Inc. as it transitioned from a founder-led company to a new growth phase.

As CEO, Kaness steered the beloved brand from primarily a fast-fashion e-tailer into a digital-native, vertical, multichannel retailer, opening physical locations and expanding in-house product lines. Searching for additional capital and larger digital infrastructure, the company, which continues to operate as an independent entity, was eventually sold to Walmart subsidiary Jet.com in March 2017. Kaness stayed on to run the operation through October and then held the title of executive-in-residence at Walmart eCommerce until recently leaving the post.

Kaness did not share his next step, although the 45-year-old advised students to build toward the version of themselves they wanted to be at 50.

“Win 50,” Kaness said. “Give yourself a long runway and all of a sudden everything seems possible.”