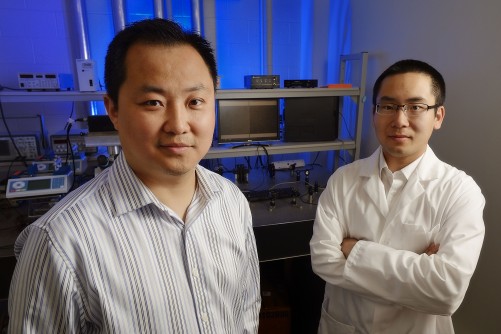 Newswise — In science, “simple and accessible detection methods that can rapidly screen a large cell population with the resolution of a single cell inside that population has been seriously lacking,” said Virginia Tech chemical engineer Chang Lu.

In the Royal Society of Chemistry journal Chemical Science, Lu has announced that he and his coworkers have developed a novel technique that detects the subcellular location of a protein (Chem. Sci., 2014, DOI: 10.1039/C4SC00578C, http://pubs.rsc.org/en/content/articlelanding/2014/sc/c4sc00578c#!divAbstract). The significance of this method is that the technique will allow the scientific and technological communities a simple and improved method for studying effectiveness of therapies for disease, including cancer.

If a protein is not located in the right subcellular compartment of a cell, “the result can be diseases ranging from metabolic disorders to cancers,” Lu explained. “Modulation of protein transport inside a cell is practiced as an important therapeutic approach for cancer treatment. The subcellular location of a target protein can also serve as a useful read-out for high-content screening of cancer drugs.”

In the human body, proteins move between distinct compartments inside cells, including the plasma membrane, the nucleus, and other membrane-enclosed areas. This movement can be a prerequisite for proteins to carry out their intended functions. These functions might include gene transcription and other molecular regulations.

In the publication, Lu and his colleagues, Zhenning Cao, a graduate student of the School of Biomedical Engineering and Sciences, Shuo Geng, a postdoctoral researcher, and Liwu Li, professor of biological sciences, all of Virginia Tech, described the shortcomings of current evaluations of protein movement. One such technique is fluorescence microscopy. According to Lu, it can only analyze a limited number of cells. Data collected by a second existing assay called subcellular fractionation only reflects the average properties of the cell populations “without revealing the heterogeneity that is often present among seemingly identical cells,” they stated.

Lu’ team had made some progress in screening cell populations in the past using an electroporation-based technique, but it did not allow the examination of native proteins and primary cells isolated from animals and from patients.

Their new work uses a method that “incorporates selective chemical release of cytosolic proteins with a standard procedure for fluorescent labeling of the protein to detect the subcellular location of a native protein,” Lu said. This simple and unique tweak to the conventional cell staining process allowed them to accurately define the subcellular location of the protein by measuring the amount of the residual protein after release. Using a flow cytometer, the speed of such measurement could reach 10,000 to 100,000 cells per second.

A key ingredient to their process is the use of saponin, a class of amphipathic glycosides. It dissolves cholesterol and permeates the plasma membrane to allow protein release. “Gentle treatment by saponin shows minimal effects on the state of the cell,” Lu added. This research was supported by a National Science Foundation grant.