Food and Antibiotics May Change Microorganisms in Gut, Causing IBS 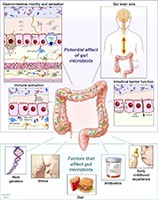 Credit: Used with permission of Mayo Foundation for Medical Education and Research, all rights reserved.

Diet, antibiotic use, stress and genetics are all potential causes of IBS.

Newswise — Bethesda, Md. (January 26, 2017)—A recent review of research suggests that changes to the microorganisms (microbiota) in the gastrointestinal (GI) tract may be a cause of irritable bowel syndrome (IBS). The review article is published in the American Journal of Physiology—Gastrointestinal and Liver Physiology.

IBS is common—up to 20 percent of middle-aged North Americans suffer from IBS and chronic bowel disorder characterized by abdominal pain, gas, diarrhea or constipation or both. The disorder has been thought to be caused primarily by a combination of emotional stress, environmental factors and genetics.

A research team from the Mayo Clinic in Rochester, Minn., analyzed studies about gut microbiota and IBS. This review led the team to make new observations about the development of the disease. Among the findings:

The researchers also highlight data suggesting that emotional stress can change the shape and function of microorganisms in the GI tract. The correlation between physiological function of the digestive system and the risk of developing IBS is important because it allows for new treatment options in the future. “Overall, the outlook is optimistic, and we now have the necessary tools and the knowledge as we embark on developing effective microbiota targeted therapies for IBS,” wrote the authors.

Read the full article, “Irritable bowel syndrome: a gut microbiota-related disorder?,” in the American Journal of Physiology—Gastrointestinal and Liver Physiology.

NOTE TO JOURNALISTS: To schedule an interview with a member of the research team, please contact the APS Communications Office or 301-634-7209. Find more research highlights in the APS Press Room.

Physiology is the study of how molecules, cells, tissues and organs function in health and disease. Established in 1887, the American Physiological Society (APS) was the first U.S. society in the biomedical sciences field. The Society represents more than 11,500 members and publishes 14 peer-reviewed journals with a worldwide readership.