For Breast Cancer, When to Screen or Not to Screen? That Is the Question Plaguing the Minds of U.S. Women—and Their Clinicians 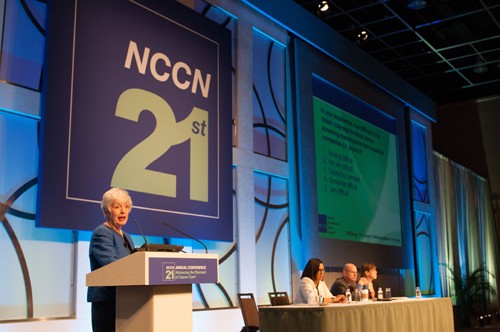 Because breast cancer is the most prevalent cancer as well as the second leading cause of cancer death in U.S. women, the community wants answers.[i]

To shed light on the screening conundrum, the National Comprehensive Cancer Network® (NCCN®) brought together experts from the three leading guidelines organizations to discuss the screening controversies during its 21st Annual Conference on April 2, 2016.

Following are citations for the three organizations’ recommendations:

The panel agreed that indeed there are benefits to breast cancer screening. However, there is debate over whether those benefits outweigh potential negative effects and as to where the value lies in cancer screening. And the conclusions vary by one’s point of view.

In establishing treatment guidelines, experts consider not only reduction in breast cancer mortality, but in treatment-related morbidity, as well, said Dr. Bibbins-Domingo, who is the Lee Goldman, MD Endowed Chair in Medicine and Professor of Medicine and of Epidemiology and Biostatistics at UCSF School of Medicine.

With old film screens from the 1970s and 80s, the randomized clinical trials for breast cancer screening showed about a 20% reduction in mortality, explained Dr. Oeffinger, Primary Care Physician and Director of the Cancer Survivorship Program at Memorial Sloan Kettering Cancer Center. Today’s observational studies, in contrast, show that mammography is reducing mortality by closer to 30-35% in certain populations. The ACS recommendations are influenced by the burden of disease and the potential benefits and harms associated with screening, focusing on 5-year increments in age, he said.

The NCCN Guidelines Panel for Breast Cancer Screening and Diagnosis considers both the randomized clinical data and the data from modern screening used in the observational studies, noting that women who are screened are less likely to be diagnosed with an advanced stage cancer, said Dr. Bevers, Professor of Clinical Cancer Prevention, and Medical Director, Cancer Prevention Center and Prevention Outreach Programs, at The University of Texas MD Anderson Cancer Center.

She added that an often neglected, yet important measurement, is the life years gained. While, as a group women in their 40s show a lower number of deaths averted, they also have the highest number of years of life gained when cancer is found and treated.

“How do you weigh false positives, overdiagnosis, and anxiety?” asked Ms. Smith.

“False positives mean two things,” said Dr. Oeffinger. The first is a call back for imaging, which typically takes place the same day as mammography. Second, in a smaller percentage of women (6-7%), a core biopsy will be performed, he explained. “While there is anxiety related to having a false positive finding or a biopsy, this remains an understudied area in the U.S.,” Dr. Oeffinger said.

“If we move the initiation of screening to 50, we will see an increase in prevalent false positives in women in their 50s and a jump in the overall false positive incidence for women in this decade,” she said.

Overdiagnosis is a screen-detected cancer that would not have led to symptomatic breast cancer if undetected by screening, resulting in overtreatment. However, there remains much uncertainty about how common overdiagnosis is, the panel noted.

All things considered, “it comes down to understanding a woman’s values and preferences and having a conversation with her physician about whether to start screening earlier,” said Dr. Bibbins-Domingo.

Dr. Bevers agreed that there is some level of overdiagnosis that accompanies earlier screening, but that it’s very difficult to quantify, and it doesn’t speak to when to start screening or how often, but only whether to screen and when to stop screening.

“Overdiagnosis is a harm of screening that is incurred regardless of the age screening starts or the screening interval as the mammographic finding—be it a calcification or other finding—will not go away unless it is treated,” she noted. “To address the issue of overdiagnosis, we need to know which lesions won’t progress,” she added.

The patient population that is most negatively affected by overdiagnosis, said Dr. Bevers, is the older women because of their likelihood for competing comorbidities.

Ms. Smith asked the panel to consider the harms of biennial screening—every two years—opposed to annual screening, which is another area of the mammography controversy.

As mentioned earlier, higher rates of screening—at any interval—leads to higher incidence in false positives, said Dr. Bibbins-Domingo. The USPSTF has found that there is a small incremental benefit to screening annually but the harms of annual screening are higher.

He added that ACS believes it is very important for women to have the opportunity to continue annual screening after age 55 if that is in their best interest based on their personal preferences and values, he added. His fellow panelists agreed.

For NCCN, there were several factors considered in recommending annual screening, said Dr. Bevers. First, there are fewer cancer deaths in the annually screened population than those undergoing biennial screening; second, while there are fewer deaths from breast cancer averted for women in their 40s, their years of life gained are significantly greater, she said. The NCCN Panel strongly felt these benefits far outweighed the possibility of a recall and possible biopsy.

The fact that three groups have different recommendations based on the same data shows there is no consensus on what constitutes a harm and where the benefit/harm threshold lies, Dr. Bevers said.

(NOTE: The recommendations discussed in this panel are specifically for women of average risk for breast cancer. Specific recommendations have been published for women with higher risk due to familial or genetic pre-disposition as well as atypical hyperplasia or lobular carcinoma in situ.)

About the National Comprehensive Cancer Network

The National Comprehensive Cancer Network® (NCCN®), a not-for-profit alliance of 27 of the world’s leading cancer centers devoted to patient care, research, and education, is dedicated to improving the quality, effectiveness, and efficiency of cancer care so that patients can live better lives. Through the leadership and expertise of clinical professionals at NCCN Member Institutions, NCCN develops resources that present valuable information to the numerous stakeholders in the health care delivery system. As the arbiter of high-quality cancer care, NCCN promotes the importance of continuous quality improvement and recognizes the significance of creating clinical practice guidelines appropriate for use by patients, clinicians, and other health care decision-makers.