For Many Students, Summer Is the Season for Research 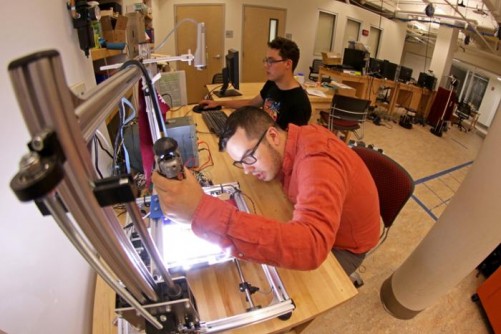 Newswise — As an art history major, Allison Smith ’17 understands the need for students to develop visual literacy and visual thinking skills to support their research and scholarly activities.

So it was natural for Smith to spend six weeks this summer exploring ways to engage students to strengthen their visual fluency so they can thrive in a fast-changing multimedia world.

“This is critical for all disciplines,”said Smith, from Croton on the Hudson, N.Y. “You have to be visually literate in order to create, analyze and use digital media.”

Working closely with her advisor, Lorraine Cox, associate professor of visual arts and director of faculty development, Smith pored over articles, reports and books on her topic, designed a faculty survey and launched a “toolbox” which, when completed, would make Union’s resources on visual literacy more accessible to students.

Smith (who is minoring in Public History and French and Francophone Studies) looked at other schools and how they promote such literacy. She also proposed a workshop to give students the skills to create dynamic presentations and research posters. And, using much of what she learned from her research, Smith created a mock syllabus for one of Cox’s classes that incorporates some of her research.

“Having six full weeks solely dedicated to a single research project gave Allison the time and space to learn first-hand what it means to do scholarship in the arts and humanities at a level different for her course work,” said Cox.

“For students like Allison, who plans to go on to do graduate work in art history, this valuable experience not only makes her competitive to be admitted into an excellent graduate program, but also sharpens skills that apply to other career path possibilities.”

Smith is among more than 120 students representing 35 different majors who participated in research this summer. They worked closely with 65 faculty across 20 departments and programs. Most projects were funded through the undergraduate research program, run by Rebecca Cortez, associate professor of mechanical engineering. The rest were supported by government or scientific society grants to faculty members, academic departments, and/or with foundation funding.

Keanu Rodriguez ’17 worked on designing a fuel injector that will be inserted into a liquid-gas propellant rocket engine. A mechanical engineering major with a minor in astrophysics, Rodriguez teamed up with John Costa ’17. Under the guidance of Jeremy Vanderover, visiting assistant professor of mechanical engineering, the pair plans to design, manufacture and test the rocket engine this winter.

“Our rocket engine will burn RP1 (kerosene) with gaseous oxygen to create the project 20l pounds of force,” said Rodriguez, from Revere, Mass. “Just like the many other components of the rocket engine, there is no single optimal design of a fuel injector. Fuel injectors must be tested for a given rocket engine configuration to evaluate which design works best.”

Alexandra Novak ‘17 and Paige Kotowitz '18 used the College’s Air Quality Network (UAIR), a series of sensors that measure indoor and outdoor carbon monoxide, nitrogen dioxide, ozone and particulate matter on campus. These pollutants are among those identified by the U.S. Environmental Protection Agency as hazardous to human health.

“Using these sensors, we hope to identify patterns in air pollutant levels,” said Novak, a chemistry major from Rochester, N.Y. “We have already seen some notable patterns in the sensor data. For example, we noticed spikes in particulate matter on the nights of July 3 and 4, which are likely a result of local firework shows.”

The students worked with Andrew Huisman, assistant professor of chemistry, and Scott LaBrake and Michael Vineyard from the department of Physics and Astronomy. They also collaborated with Jeff Corbin, associate professor of biology, to develop a lab for Introduction to Environmental Science that would incorporate the air quality sensors. Students would use data collected from the sensors to make and test predictions about the sources of pollutants across campus.

“We are also working on developing an interactive platform that displays the data in a manner that is easy for the campus community to access and explore,” Novak said. “The display will educate the campus community about local and regional air quality and air chemistry.”

For their project on Evolutionary Fabrication, Frank Chiarulli Jr. ’17 and John Peterson ‘17 worked with John Rieffel, associate professor of computer science. Using optimization tools from the field of evolutionary design, coupled with a consumer-grade 3D printer, the pair hoped to produce a system that, given a set of design constraints, can iteratively produce a solution to that problem.

“This would allow for a system which we could give a simple design problem, leave for a few days, and return to not only a design optimized for that problem, but a system which would be able to reliably produce that design on a 3D printer,” said Chiarulli, a computer science and visual arts major from Chappaqua, N.Y.

Whether out in the field or working in labs and study spaces on campus, students engaged in a diverse mix of projects that support Union’s commitment to undergraduate research.

“The emphasis on undergraduate research is what especially drew me to Union,” said Allison Smith. “I hadn’t found that at other small liberal arts schools. The opportunity to conduct research and develop close working relationships with faculty was very appealing.”