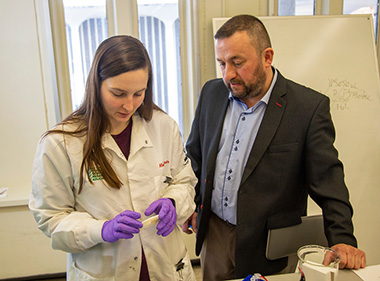 Newswise — ALBANY, N.Y. (Jan. 6, 2020) – Forensic chemist Jan Halámek is proving that our own perspiration not only gives away how drunk we are – but if we are high, too.

Through new research, published in December’s edition of ACS Sensors, the Halámek lab has captured the ability to detect a person’s marijuana-use based on contents in a small skin secretion that can be taken from fingerprints or any other sweat glands.

This discovery builds on the lab’s concept for a roadside testing kit to be used by law enforcement. In November, Halámek introduced a prototype for a color-changing test strip that detects blood alcohol content (BAC) based on ethanol levels in sweat.

“Currently there is a zero-tolerance policy when it comes to marijuana use and operating machinery,” said Halámek, an assistant professor of chemistry at the University at Albany. “While many states are moving to various stages of legalization, the focus is mostly on possession and in-home use. There are no reliable roadside devices being used to test for marijuana-impaired driving.”

“What makes the use of sweat as a biometric unique is that it is non-invasive. No blood needs to be drawn for a sample,” Halámek added. “Our test can be done instantaneously, on the side of the road, which eliminates any possibility of tampering.”

Similar to the alcohol test strip, Halámek’s analysis to detect marijuana relies on a color change. However, instead of ethanol levels in the sweat sample, this test reacts to tetrahydrocannabinol (THC). THC is the main psychoactive component found in marijuana plants and its extracted forms including liquids (THC oils) and edibles (brownies, cookies, gummies, etc.)

The analysis works by using an antibody that quantifies the THC metabolite.  When less of a color change is observed, this means a higher amount of THC metabolite is present in the sweat sample.

To put their discovery to the test, Halámek, along with his team of UAlbany graduate students, surveyed eight volunteers on their recent marijuana use. Four were users; four were non-users. The group then provided their fingerprints on a plastic wrap that was cut out and subject to analysis.

Results showed a clear difference in observed color change between the two groups.

“While drugs are a new topic for the Halámek lab, it is something we plan to continue diving into,” Halámek said. “Much of the fundamentals are the same as our previous research in terms of the collection, extraction, and use of sweat as a biometric.”

Along with its roadside testing kit research, the Halámek lab has published a number of other groundbreaking forensics discoveries. In 2017, his team released a concept paper for a sweat-based authentication to unlock mobile and wearable devices. The lab has also released numerous studies on the use of physical crime scene evidence, such as fingerprints or blood residue, to quickly identify key characteristics of culprits.

Halámek joined UAlbany in 2013 and has been funded through numerous fellowships and a three-year grant from the Department of Justice and National Institute of Justice to develop non-invasive sensing concepts.

You can learn more about Halámek by visiting his research website and expert page.