Forest fires as an opportunity for ecosystem recovery 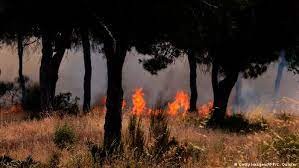 Newswise — Great forest fires are ever more frequent globally and their consequences more severe and destructive. Climate change and human activity are influencing the capacity of ecosystems and the life forms that inhabit them to recover from forest fires. However, the actions to recover the affected environment can be an opportunity to recover lost natural values.

It is estimated that globally there are more than two million hectares of land in need of restoration. The fires that occurred in those places provided the people who manage them with an opportunity to change, via a suitable process of ecological restoration, the previous bad forestry practices. The actions to recover the environment after a forest fire must be directed towards favouring more resilient and less flammable natural vegetation, which is better adapted to the new climate conditions it will have to live in.

So say the University of Seville teachers Pablo García Murillo and Vicente Jurado Doña in an article signed together with researchers from other universities in the review Science. In it, they highlight that, all over the world, there are ecosystems that are vulnerable to fires, and that there are numerous organisms living in them that have developed evolutionary adaptations to cope with the natural cycles of fire. However, the current conditions of climate change and the intense and frequent changes in the natural world caused by human activity have introduced a change in the dynamic of the great fires.

This new situation can exceed the capacity of living things to deal with these disturbances and, in the last instance, to provoke the collapse of the ecosystems that provide them with a home. For that reason, great fires are one of the main causers of change in the world's forestry systems.

However, the great forest fires can also mean, in some occasions, an opportunity to recover the natural values of ecosystems that had been degraded. In many cases, this degradation is precisely the cause of an increased risk of fire. Good examples of this are the many of the single-species pine plantations of the Mediterranean region, whose purpose is now obsolete, meaning they generate more problems than benefits.