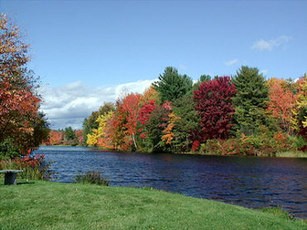 Newswise — Fall colors seem to show up later and later—if at all--and scientists say we can blame increasing amounts of carbon dioxide in the atmosphere for prolonging the growing season of the trees. However, that could actually be good news for forestry industries.

"Basically, this is a good-news story for our region's forests," said Karnosky. "It suggests that they will become a bit more productive due to the extra carbon being taken up in the autumn, along with the increased photosynthesis throughout the longer growing season."

The Michigan Tech professor of forest resources and environmental science and colleagues from Illinois, Wisconsin, Belgium, England, Estonia and Italy collected and analyzed data over two years on what they call "autumnal senescence" or the changing of colors and falling of leaves as photosynthesis decreases. They studied forests near Rhinelander, Wisconsin, and Tuscania, Italy.

They found that the forests on both continents stayed greener longer as CO2 levels rose, independent of temperature changes. However, the experiments were too brief to indicate how mature forests may be impacted over time. Also, Karnosky's research in Wisconsin suggests that other factors, such as increasing ozone levels in the part of the atmosphere closest to the ground, can negate the beneficial effects of elevated carbon dioxide.

The study's results are another example of an expanding body of scientific evidence that global climate change is affecting the world's forests. There has been plenty of evidence gathered previously to show that increased carbon dioxide in the atmosphere is causing tree growth to begin earlier in the spring, but until now, most scientists believed that other factors, such as temperature and length of day, were the primary elements influencing autumnal senescence.