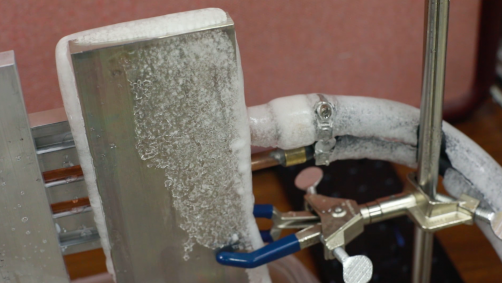 Virginia Tech researchers experimented by treating aluminum plates to render them superhydrophobic — that is, so water-repellent that droplets easily roll off without sticking to the surface. 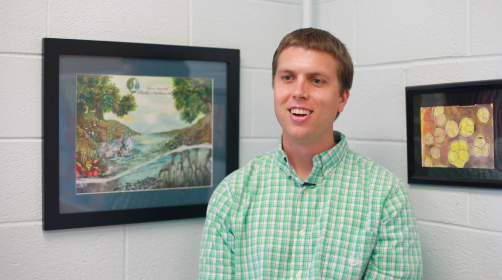 Jonathan Boreyko, assistant professor in the Department of Biomedical Engineering and Mechanics in the Virginia Tech College of Engineering.

Newswise — Jonathan Boreyko turned on the defroster in his car one cold winter morning and waited for the ice on the windshield to melt. And kept waiting.

Boreyko, an assistant professor in the Department of Biomedical Engineering and Mechanics in the College of Engineering, knew there had to be a more efficient, quicker way to melt the frost.

So he developed one.

Using what he calls “a very simple chemical recipe,” Boreyko has found a way to defrost surfaces 10 times faster than normal.

Boreyko, along with undergraduate students William McClintic and Kevin Murphy, experimented by treating aluminum plates to render them superhydrophobic — that is, so water-repellent that droplets easily roll off without sticking to the surface.

Once chemically-treated, the frost that formed on the surface of the chilled aluminum grew in a “suspended” state, Boreyko explained.

“In other words, there were a lot of nano-air-pockets between the frost sheet and the actual solid substrate of aluminum,” he said. “This made the frost highly mobile and easy to shed as it melted, kind of like a puck on an air hockey table.”

The research, recently published in ACS Applied Materials & Interfaces, has massive implications, considering that virtually any type of material can be rendered superhydrophobic. According to Boreyko, the method could potentially be used on anything from heat pumps to wind turbines to airplanes.

The concept of suspended water is not exactly new — scientists have known for a decade that dew droplets can essentially float on a superhydrophobic surface because of the nano-roughness between the surface and the dew, Boreyko said.

But the implications of a superhydrophobic surface forming air pockets underneath frost has only recently begun to be explored.

“My idea came from the realization that frost is simply dew droplets that have frozen over into ice — so if dew droplets can be highly mobile on a superhydrophobic surface, maybe frost can be too,” Boreyko said. “Sure enough, when frost formed on our chilled superhydrophobic aluminum, the ice was able to trap air pockets underneath itself just like with liquid water.”

With that in mind, Boreyko plans to continue improving upon the original chemical mixture. Through further research, he hopes to make the superhydrophobic surfaces durable for long-term practical use.