During a high school football game, Hayden took a bad hit and suffered a severe spinal cord injury. Two of his vertebrae were so damaged they were essentially flipped in place. In need of a Level 1 Trauma Center, Hayden was rushed to Loyola. He underwent an extensive procedure to alleviate the pressure on his spinal cord and correct the damage. After surgery, he was on a ventilator and had a 5% chance of making a full recovery. Through strength, grit and determination Hayden fought his way back to his normal self. He slowly learned to breathe on his own, regained movement in his limbs and finally started to walk. Hayden is now pursuing his dream of a career in agriculture while working on his family farm: baling hay, feeding cows and driving a tractor. In the fall, Hayden will head off to college to continue his dream. Hayden is our hero. For more information, visit LoyolaMedicine5K.org. 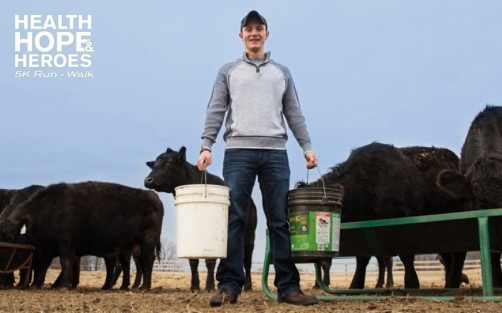 Hayden will participate in the Loyola Health, Hope and Heroes 5K on June 5.

Newswise — MAYWOOD, IL – After a devastating injury during a high school football game left him paralyzed, Hayden Schaumburg didn’t know if he would ever walk again.

Thanks to the staff at Loyola University Medical Center and his dogged determination, Hayden is walking again and he will be an honorary “hero” for Loyola’s 5th Annual Health, Hope & Heroes 5K Run/Walk on Sunday, June 5.

For Hayden, of Watseka, Illinois, participating in the 5K continues a remarkable recovery since October 17, 2014. Hayden was on the kick-return team for the Watseka Warriors when he lowered his head to make the block. The impact would leave him paralyzed from the shoulders down.

“When the contact was made and he wheeled around, I could see all the life go out of his body,” he said.

Hayden’s local hospital sought out the expertise of a Level 1 Trauma Center. He was transferred to Loyola that night and put under the care of neurosurgeon Douglas Anderson, MD. The spinal cord injury was severe – two of his vertebrae were so damaged they were essentially flipped in place. Dr. Anderson performed a 10-hour surgery to repair the damage.

After surgery, Hayden was on a ventilator and his parents were told he had a 5 percent chance of walking again.

Hayden spent 47 days at Loyola and slowly learned to breathe on his own and regain some movement.

“I believe there’s angels on this earth with us and I think some of the nurses were definitely angels,” Hayden said. “They gave me hope in a situation in which there wasn’t much hope.”

Hayden continued his rehabilitation at Shriners Hospital for Children® Chicago. He went from using a motorized wheelchair to a wheelchair, to a walker, to crutches. On January 29, 2015, Hayden walked out of Shriners.

“It was definitely one of the greatest moments of my life,” Hayden said. “Dr. Doug Anderson was on call that night, one of the best neurosurgeons in the nation, if not the world, in my opinion,” Hayden said. “I can never thank him enough for all that he has done for me.”

Hayden, now 17 and headed to the University of Illinois in the fall, is one of three Loyola heroes who will captain fundraising teams for the 5K.

The Health, Hope & Heroes 5K Run/Walk will be followed by a Children’s Hero Hustle, a 50-yard dash available for children ages 10 and younger. Area sports mascots and characters will be on hand to entertain kids as they race. Kids’ activities also will be held at the finish line area from 9-11:30 am.

All participants receive a commemorative t-shirt. Entertainment and refreshments will be provided following the race.