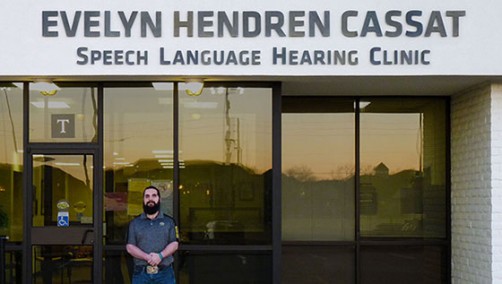 Tony Perez has made significant progress overcoming his TBI by attending speech therapy at the Speech-Language-Hearing Clinic at Wichita State.

Newswise — In 2011, Anthony "Tony" Perez was a 22-year-old junior majoring in business administration at Wichita State University. On June 10 his life changed forever. Perez was riding his moped when he was struck by an SUV and rushed to the nearest hospital, Wesley Medical Center.

His injuries were so serious that he had only the minimum level of function to breathe and was given only a 5 percent chance of survival. He wasn't expected to make it through the night; the hospital staff even prepared a morgue donor tag for him.

Perez woke up 24 hours later and couldn't speak or move the right side of his body. But he understood verbal cues and could communicate by squeezing his mother's hand. He would give a thumbs up or down to indicate yes or no. After spending 20 days in the hospital, Tony traveled to Nebraska and spent several months at Madonna Rehabilitation Hospital in Lincoln and Quality Living Inc. in Omaha.

He is now able to talk on his own and is relearning how to speak sentences and be independent. Although he has made remarkable progress since the accident, Perez is still recovering from his life being turned upside down. He sustained several injuries, including a Traumatic Brain Injury (TBI) which resulted in Aphasia, a communication disorder that results from damage to the parts of the brain that contain language. Aphasia makes it difficult for him to express his thoughts, speak, read and write.

"Tony continues to meet his goals every semester," she says. "He is super motivated and such a hard worker. He never complains and is a really inspiring client."

Perez says the clinic has been an important part of his recovery.

"The staff and students are really friendly and the therapists have been very helpful in my therapy," he says. "Because of them I'm able to continue improving my speech skills."

He says his family has been his biggest support throughout his journey and he connects with TBI groups online. He has also developed an interest in bodybuilding, which helps strengthen his muscles and improve motion.

Perez wants to help raise TBI awareness in March during National Brain Injury Awareness Month. He created special flyers and graphics for people to use and share on their social media accounts. He wants people to know there are many TBI survivors in the world. It can happen to anyone, young or old, and the injury isn't always visible.

According to the Brain Injury Alliance, every 23 seconds one person in the U.S. sustains a brain injury, and an estimated 1.7 million people sustain a TBI annually. Falls are the leading cause of TBI.

"There aren't a lot of resources in Wichita for TBI survivors," he says. "It's not a short or easy journey and I want other survivors to know they aren't alone."

The mission of Wichita State University is to be an essential educational, cultural and economic driver for Kansas and the greater public good. Wichita State is a doctoral research university enrolling nearly 15,000 students and offering 59 undergraduate degree programs in more than 150 areas of study in seven undergraduate colleges. The Graduate School offers 45 master's and 12 doctoral degrees that offer study in more than 100 areas. Wichita State's Innovation Campus is an interconnected community of partnership buildings, laboratories and mixed-use areas where students, faculty, staff, entrepreneurs and businesses have access to the university's vast resources and technology. www.wichita.edu

NOTE -- If the media release text is not visible, please refresh the page in your browser.