Foundation Leaders Gather to Discuss How Women Are Shaping Philanthropy 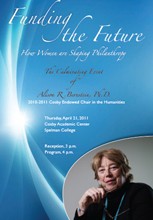 Newswise — ATLANTA (April 11, 2011) -- Women now control more than 43 percent of the nation's wealth according to the most recently published IRS Personal Wealth Table. Also, the Boston College Center on Wealth and Philanthropy reports that women will inherit 70% of the $41 trillion in intergenerational wealth over the next 40 years. On April 21, 2011, at 4 p.m., experts will gather at Spelman College to address how women are leveraging this economic power to redefine philanthropy in the 21st century.

“Funding the Future: How Women are Shaping Philanthropy,” the culminating event of Alison R. Bernstein, Ph.D., Cosby Endowed Chair in the Humanities, will hone in on how women are changing philanthropy as heads of Foundations, individual donors and major supporters of a variety of institutions and projects. Sponsored by the Spelman College Women’s Research and Resource Center, the panel discussion will address the following questions: Do women donors have different priorities from men? And how does having a woman CEO change a foundation's mission and agenda?

“Given that they control a significant portion of the wealth in this country and that on average they give more than men, women are pivotal players in the philanthropy sector,” said Dr. Bernstein. “This panel of experts will provide perspectives on how this power is being strategically used to influence change globally.”

A former vice president of the Ford Foundation’s Knowledge, Creativity and Freedom Program, Dr. Bernstein, a historian, is a well-respected expert on philanthropy and higher education. During her 14-year tenure at the Ford Foundation, she led a program that provided $100 million annually in funding, including $1 million to the Spelman Women’s Research and Resource Center to establish its endowment fund. A leading authority and contributor to various national and international conferences and seminars in the fields of philanthropy and higher education, Dr. Bernstein currently serves as a Cosby Endowed Professor at Spelman, teaching “Walking in Two Worlds: American Indian Women in the 20th Century.”

About the Cosby Endowed ProfessorshipThe William and Camille Cosby Endowed Professorship was established in 1988. The recipient utilizes the post for one year to expand the College’s curricular offerings by designing a course rooted in her specific area of expertise, and facilitating interdisciplinary initiatives. The residency concludes with a special culminating event developed and implemented by the Cosby chair.