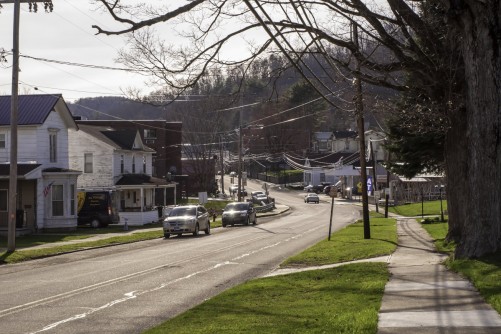 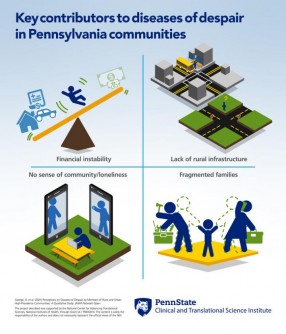 Newswise — Financial instability, lack of infrastructure, a deteriorating sense of community and family fragmentation are key contributors to diseases of despair in Pennsylvania communities, according to Penn State College of Medicine and Highmark Health researchers. The researchers conducted four focus groups in Pennsylvania communities identified as having high rates of despair-related illnesses.

Diseases of despair are medical diagnoses involving alcohol-related disorders, substance-related disorders and suicidal thoughts and behavior. Princeton economists Anne Case and Angus Deaton proposed the concept of deaths of despair in 2015 after observing a decline in life expectancy of middle-aged white men and women between 1999 and 2015 — the first such decline since the flu pandemic of 1918. They theorized that this decline is associated with the social and economic downturn in rural communities and small towns over the last several decades, leading to feelings of despair and loss of hope for the future.

“The crisis in recent years has broadened past this initial demographic that Case and Deaton established, and we are now seeing rising excess mortality in other groups of working-class Americans, including people of color,” Daniel George, associate professor of humanities and public health sciences, Penn State College of Medicine, said. George is a researcher with a Penn State Clinical and Translational Science Institute project looking at diseases of despair in Pennsylvania.

The first phase of this project analyzed Highmark Health insurance claims and found that the rate of diagnoses related to diseases of despair — alcohol-related disorders, substance-related disorders and suicidal thoughts and behaviors — increased significantly in the past decade.

“Nearly one in 20 people in the study sample of 12 million people were diagnosed with a disease of despair in our earlier research,” Emily Brignone, Highmark Health, said. “Following Case and Deaton’s findings, we saw the most substantial percentage increase in disease of despair diagnoses among men ages 35 to 74, followed by women ages 55 to 74 and 18 to 34. The issue is one of great importance that we are proud to be addressing with Penn State.”

Using the data from the first study, the researchers then identified hotspots in Pennsylvania with a high rate of diagnoses related to diseases of despair for the second phase of the project. A disease of despair rate was determined by dividing the number of unique members with a qualifying diagnosis during that year by the total number of members. Researchers selected communities in Dauphin and Lebanon counties and conducted focus groups through existing community partnerships. Researchers report their results in the journal JAMA Network Open.

“Most of the research on deaths and diseases of despair have been at the epidemiological level; in other words, looking at large data sets and trying to identify patterns over time,” George said. "There has been less done qualitatively – basically exploring the perceptions and beliefs of people who are affected by diseases of despair, trying to understand what is happening on the ground."

Four focus groups included a total of 60 participants. Focus group members were both residents and community health workers who interact with those affected by diseases of despair. The research team analyzed transcripts of the focus groups to identify themes.

The first theme researchers identified was the role of financial instability and how United States domestic policy contributes to self-harming behavior.

"One of the main findings was that financial distress is at the heart of it," George said. "It is something that has been driving instability in people's lives and increases the risk for drug abuse and escape through drugs and drink. People identified jobs with full benefits and a living wage not being as available as they used to be and people having to choose groceries over medical care and their anti-anxiety medications.”

The second theme that researchers identified was a lack of infrastructure, especially in rural communities.

“Focus group participants noted a lack of public transportation that could help people get to their jobs or to their health care appointments, and the role that played in compounding distress in people's lives," George said. "They also identified failures in our school systems that were resulting in schools not preparing kids to have trades or skills to make them competitive in a 21st-century economy."

The third theme that researchers identified was a deteriorating sense of community. Participants discussed fragmentation over the last several decades that has led to rising isolation and distrust, and a lack of neighborly support. These trends have been worsened, in part, by social media.

"There was a really interesting perception that there has just been a general decline in the community," George said. "There is more loneliness, more alienation, a loss of trust among people, less neighborly interactions. People talked about just feeling an absence of actual human connection online with technology and electronic devices, and that it has taken the place of tangible, real human connection— and that that compounds loneliness."

The final theme researchers identified was the fragmentation of the family.

“There is more pressure on two-earner families, and that was leading to kids being less bio-psychosocially developed and leaving home at greater risk for despair-related behaviors,” George said.

Researchers will next consider potential solutions, including the role of health care facilities in identifying despair-related risk factors, partnerships with community organizations that work with those most at risk and the use of big data analysis and machine learning to identify at-risk communities and guide state-level policy changes. Focus group attendees shared their beliefs that more needed to be done at the local and state levels to address the causes of despair, including non-profit initiatives, peer support, infrastructure building, economic development and rebuilding a sense of community as well as social safety nets.

"A key message is really that we do not want to blame the victims here," George said. "Despair is something that is an indictment of the way that we have organized our society rather than a personal failing or an individuated sense of despair that somebody may feel. People are responding to objectively worsening material circumstances in their lives. What we are trying to do with the diseases of despair construct is essentially create a parameter whereby we can measure it, study it, try to understand what is going on and then address root causes."

A podcast about this research is available at pennstatectsi.libsyn.com.

About Penn State Clinical and Translational Science Institute
Penn State Clinical and Translational Science Institute provides tools, services and training to make health research more efficient at Penn State. It advocates for translational science at the university and is a bridge between basic scientists and clinical researchers. The institute encourages collaboration to discover new treatments, medical procedures and ways to diagnose disease. To subscribe to its weekly newsletter, text PENNSTATECTSI to 22828. Learn more at ctsi.psu.edu.