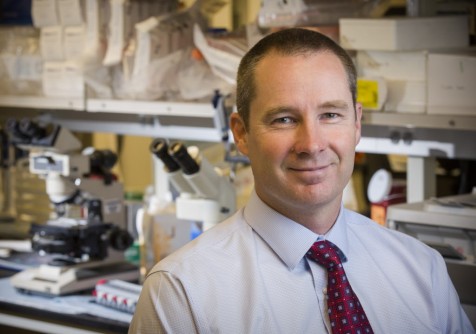 Based on their data from 133 adult participants in one clinical trial, the researchers identified potential biomarkers associated with the development of the toxic effects, known as cytokine release syndrome and neurotoxicity. They also created algorithms aimed at identifying the rare patients whose symptoms were most likely to turn life-threatening.

The researchers anticipate that their work could be the basis for an algorithm that doctors could follow to reduce the risk of the severe side effects and occasional deaths, which have been seen in clinical trials of various CAR T-cell products. They said that their findings will need to be tested and improved upon by further study, and noted that their results arise from a clinical trial of a particular CAR T-cell product, which is made by and at Fred Hutch.

“It’s essential that we understand the potential side effects of CAR T therapies” said Fred Hutch’s Dr. Cameron Turtle, who led the research. “While use of these cell therapies is likely to dramatically increase because they’ve been so effective in patients with resistant or refractory B-cell malignancies, there is still much to learn.”

The first CAR T-cell product was recently approved by the U.S. Food and Drug Administration to treat certain leukemias. That product, like the one studied by the Fred Hutch team, reprograms patients’ immune cells to kill blood cancer cells bearing a protein called CD19.

The 133 participants in the Fred Hutch clinical trial – believed to be the largest sample size in any published study of CAR T-cell therapy side effects – had advanced leukemias or lymphomas that had proven resistant to standard therapies. Over the last two years, Fred Hutch papers reported results from different groups of patients treated with the optimal regimen of chemotherapy and CAR T cells: 93 percent of participants with B-cell acute lymphoblastic leukemia went into complete remission; 64 percent with non-Hodgkin lymphoma experienced complete remission; and 86 percent of a subset of patients with high-risk chronic lymphocytic leukemia cleared disease from their bone marrow.

“These patients had highly resistant, refractory disease,” Turtle said. “For many of them, it was their last option.”

The two latest papers provide detailed descriptions of the clinical courses of cytokine release syndrome and of neurotoxicity in study participants, including the types of symptoms present, the timing of their occurrence and the course they ran to resolution. The neurotoxicity paper also includes detailed data from imaging and pathological studies.

As previously reported, complications of cytokine release syndrome, neurotoxicity or both were fatal for some participants. The new findings show that in the vast majority of patients (about 95 percent of participants) harms were either reversible or did not occur.

One of the studies’ novel findings is that severe cases of both types of toxicities were associated with signs that the endothelial cells, or the linings of patients’ blood vessels, were ramping up activity in response to injury. For example, the team found that the normally tight barrier between the blood and the brain had broken down in some patients with severe neurotoxicity, and cytokines and CAR T cells from the blood had entered the fluid bathing the brain. The researchers say that biomarkers for endothelial activation could help identify which patients are at greatest risk of CRS and neurotoxicity.

As the research progressed, the study investigators adjusted their CAR T-cell dosing strategy. This change appears to correspond with a reduction in the frequency of the most serious forms of these toxic effects, though more research is needed to confirm this.

In treating clinical trial participants at Seattle Cancer Care Alliance, Fred Hutch’s clinical partner, the researchers developed methods for monitoring and treating toxicities, as reported in these two papers, that allow study participants to receive the preparatory chemotherapy and subsequent CAR T-cell infusion as outpatients. Patients are admitted into the hospital if they spike a high fever in the days following the infusion.

“We have come a long way in understanding what these toxicity events are,” Hay said. “That’s really what these two papers demonstrate.”

The researchers identified five independent factors relating to participants’ baseline health status upon trial enrollment and variation within the experimental treatment itself, such as cell dose, which predicted patients’ risk of developing any grade of cytokine release syndrome.

The researchers developed a simple two-part method to identify the patients who would go on to develop severe cytokine release syndrome. Within the first day and a half after T-cell infusion, the red flags were a fever of at least 102 degrees Fahrenheit and high levels of one particular immune-signaling chemical, a cytokine known as MCP-1. The algorithm was relevant to all three cancer types included in the trial.

While an effective therapy for cytokine release syndrome is FDA-approved — a cytokine-modulating drug and/or a steroid — it’s unclear what the best protocol is for early intervention in the development of side effects. The data from their study could inform the design of a clinical trial to test the best strategy for blunting the development of the most serious cases, the researchers say.

A wide range of neurologic side effects are included under the umbrella of neurotoxicity, which occurred in 53 of the 133 trial participants after CAR T-cell infusion. The most common type of neurologic side effect was delirium with maintained alertness (35 patients), the team reported. Other manifestations of neurotoxicity included headache, problems speaking, a decrease in consciousness and, rarely, seizures (four patients) or coma (six patients). A total of seven patients experienced life-threatening neurotoxicity.

The team found that fever of at least 102 degrees Fahrenheit and high levels of two cytokines (IL-6 and MCP-1) in the first 36 hours after CAR T-cell infusion could identify, with high accuracy, those patients who would go on to develop life-threatening neurotoxicity.

There are no data that point toward the best treatment for neurologic toxicities of CAR T-cell therapy, and there are not yet any validated laboratory models to use for research to clearly elucidate their causes. The researchers hope that their comprehensive data provide a springboard for research teams to delve into its causes and best treatments.

This research was funded by the National Institutes of Health; Juno Therapeutics Inc., the Life Science Discovery Fund; the Bezos family; and institutional funds from Bloodworks Northwest. Fred Hutch, where Turtle, Hay and several other co-authors are employed, has a financial interest in Juno and receives licensing and other payments from the company. The Hutch has pending patent applications that could be licensed by nonprofit institutions and for-profit companies, including Juno. For additional disclosure information about the authors, please see the papers.

The Cancer Discovery paper on neurotoxicity was led by Turtle (senior author) and co-first authors Dr. Juliane Gust of the University of Washington, Hay and Dr. Laïla-Aïcha Hanafi of Fred Hutch. Other authors are from Fred Hutch, UW, BloodWorks Northwest, Juno and the University of British Columbia.

The Blood paper on cytokine release syndrome was led by Turtle (senior author) and Hay (first author). Other authors are from Fred Hutch, the University of Washington, Juno, Seattle Children’s Hospital and Bloodworks Northwest.