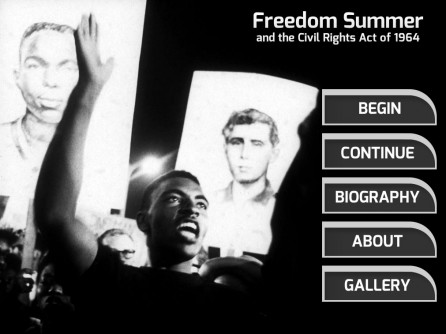 Newswise — BLOOMINGTON, Ind. -- “Freedom Summer and the Civil Rights Act of 1964” is now available as an iPad app and on the Web. The game-based interactive learning module from the IU Center on Congress explores the relationship between the civil rights movement and Congress’ passage of civil rights legislation.

Freedom Summer was an organized campaign in 1964 to register black voters. The campaign focused on a state with a large black population and a horrific record of minority persecution: Mississippi. There, and across the South, Jim Crow laws, brutality and murder were used to shut out black voters and maintain oppression.

More than 1,000 Freedom Summer volunteers, mostly white northern college students, worked alongside thousands of black Mississippians. Their voter-registration efforts met with intimidation and violence from local officials and groups such as the Ku Klux Klan. The 10-week Freedom Summer project saw more than 1,000 arrests of activists; scores of beatings; the firebombing of black churches, businesses and homes; and multiple murders. The unrest and killings drew media attention and gave momentum to efforts in Congress to pass civil rights legislation.

In the “Freedom Summer” app, players are presented with a series of 20 events in history -- some showing the activities of the civil rights movement in 1963 and 1964 and others showing how civil rights legislation was debated in Congress. After each event, the player must predict the reactions to the event, and then drag-and-drop the event onto one of two parallel timelines, either the Congress Timeline or the Civil Rights Timeline. Players discover how events outside and inside the legislative process affected each other, and they see the role that individuals and Congress play in representative democracy.

Among the events on the Civil Rights Timeline are Gov. George Wallace’s June 1963 “stand in the schoolhouse door” in a failed attempt to block integration of the University of Alabama; the August 1963 civil rights March on Washington; the September 1963 bombing of Birmingham’s 16th Street Baptist Church, killing four young black girls; President John F. Kennedy’s assassination in November 1963; and the June 1964 murders in Mississippi of Freedom Summer volunteers James Earl Chaney, Andrew Goodman and Michael Schwerner, who were abducted and killed by Ku Klux Klan members working in collusion with local law enforcement.

Events on the Congress Timeline span from when President Kennedy called in June 1963 for Congress to pass a civil rights bill, until the Civil Rights Act was signed into law by President Lyndon B. Johnson in July 1964, outlawing discrimination on the basis of race, color, religion, sex or national origin in public facilities, in the classroom and in the voting booth.

The “Freedom Summer” app includes biographies of 20 individuals who played pivotal roles in the civil rights movement and in the contentious congressional debate that led to passage of the Civil Rights Act.  Those featured include Montgomery, Ala., bus-boycott icon Rosa Parks; Fannie Lou Hamer, a key Freedom Summer organizer; Medgar Evers, killed by a sniper in Mississippi in June 1963, hours after President Kennedy’s address to the nation on civil rights; and the Rev. Martin Luther King Jr., whose “I Have a Dream” speech at the 1963 March on Washington rally helped spur Freedom Summer.

Legislators featured include Senate Majority Leader Mike Mansfield and Senate Democratic Whip Hubert H. Humphrey, who worked to pass the Civil Rights Act; Sen. Richard B. Russell, who led the Southern Democratic bloc opposed to the legislation; and Senate Republican Leader Everett Dirksen, who worked with pro-civil-rights Democrats to craft a civil rights bill that a solid majority of GOP senators could support, ensuring its passage.

The app also includes a photo gallery of more than 80 primary-source images showing the reality of segregated life and racial injustice in the 1960s and the tumultuous events of the decade -- photos drawn from the Library of Congress collection and other sources. A glossary section explains terms such as filibuster, cloture, Jim Crow, Dixiecrats, literacy tax, poll tax and Southern bloc, and helps sort out the many groups active in promoting civil rights, including the NAACP, CORE, SCLC, COFO and SNCC.

About the Center on Congress

The Center on Congress is a nonpartisan educational institution that developed out of Lee Hamilton's recognition during his 34 years in the U.S. House of Representatives that Americans should be more familiar with Congress’ strengths and weaknesses, its role in our system of government, and its impact on the lives of ordinary people every day.

The center offers an extensive array of civic education programs, projects and resources to foster an informed electorate that understands our system of government and participates in civic life. These include: Web-based, interactive modules and other online learning tools in English and Spanish; print publications; commentaries for newspapers; video and television in the classroom resources; survey research; teacher awards; and seminars, conferences, and a lecture series.

The Center on Congress is supported in part by the Office of the Vice Provost for Research at IU Bloomington.