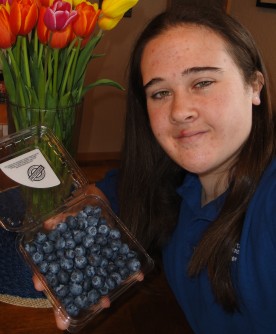 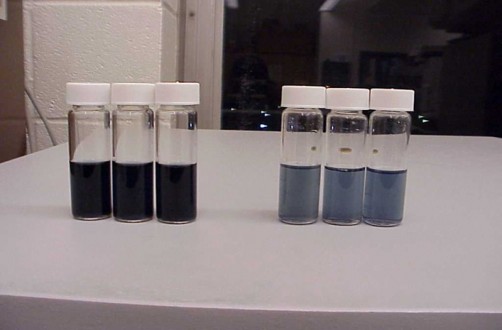 Measuring the phenolic content of the pigments in frozen vs. fresh blueberries gives the researchers a better idea of the fruit’s antioxidant capacity.

Newswise — Blueberries pack a powerful antioxidant punch, whether eaten fresh or from the freezer, according to South Dakota State University graduate Marin Plumb.

Anthocyanins, a group of antioxidant compounds, are responsible for the color in blueberries, she explains. Since most of the color is in the skin, freezing the blueberries actually improves the availability of the antioxidants. The food science major from Rapid City, who received her bachelor’s degree in December, did her research as part of an honors program independent study project. “Blueberries go head to head with strawberries and pomegranates in antioxidant capacity,” said professor Basil Dalaly, Plumb’s research adviser. In addition, blueberries are second only to strawberries, in terms of the fruits Americans prefer. Blueberries are beneficial for the nervous system and brain, cardiovascular system, eyes and urinary tract, Dalaly explained. “Some claim it’s the world’s healthiest food.”

The United States produces nearly 84 percent of the world’s cultivated blueberries, an estimated 564.4 million pounds of blueberries in 2012, according to the Agricultural Marketing Resource Center. Since blueberries are frozen soon after they are picked, “they are equal in quality to fresh,” Plumb explained. She analyzed the anthocyanin content of blueberries frozen for one, three and five months and found no decrease in antioxidants over fresh berries. The leaching that occurs from freezing actually increased the anthocyanin concentration, noted Plumb. “The ice crystals that form during freezing disrupt the structure of the plant tissue, making the anthocyanins more available.”

Antioxidants, such as anthocyanins, eliminate free radicals, which are produced through common biological reactions within the body and outside factors such as the sun, pesticides and other pollutants, Dalaly explained. If left to roam free, these free radicals can attack DNA, proteins and lipids resulting in cellular changes that lead to development of diseases such as cancer. “They have a domino effect,” Dalaly said. “That is why we need to consume at least seven to nine servings of fruits and vegetables a day.” He teaches a course on phytochemicals—the naturally-occurring chemical compounds in fruits and vegetable, many of which have the potential to boost the immune system and impact diseases, such as cancer and heart disease. His advice is simple: “the greener, or redder, the better.”

Plumb called her undergraduate research project “a very good experience,’ noting that she learned to both ask and answer questions such as “why is this happening this way?” One of the surprises was that she had to use blueberries from Canada and Argentina because they were in season when she did her experimental work.

Plumb concluded: “Blueberries are a great food, very good for you.” 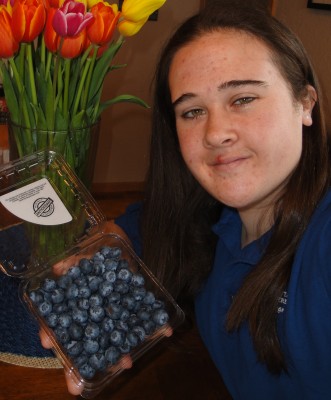 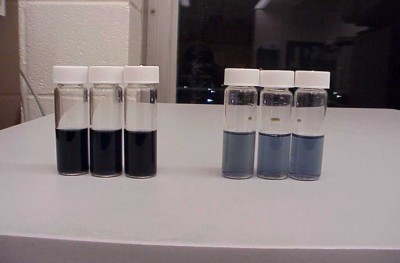 Caption: Measuring the phenolic content of the pigments in frozen vs. fresh blueberries gives the researchers a better idea of the fruit’s antioxidant capacity.