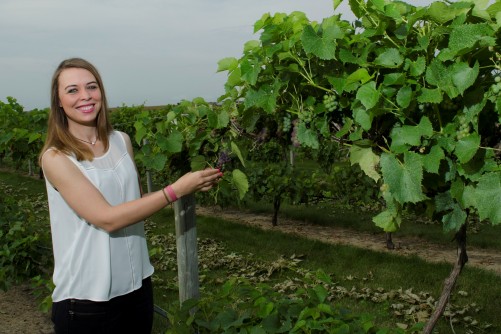 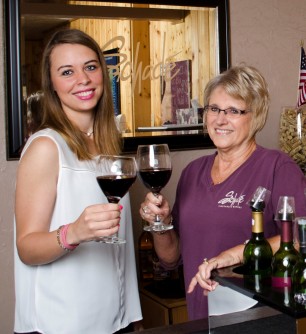 Marine Bezault of Clermont-Ferrand in central France and Nancy Schade share a toast during the last week of her internship at Schadé Vineyard and Winery near Volga.

Newswise — Objectivity, energy and a new perspective—these are the strengths that South Dakota State University interns bring to Schadé Vineyard and Winery near Volga, according to owner and operator Nancy Schade. For Marine Bezault, a graduate student from Clermont-Ferrand in central France, the 10-week summer internship was a chance to improve her English while learning small business marketing. Bezault came to SDSU through an exchange program with the graduate school she attends, the École Nationale Supérieure Agronomique de Toulouse. It is one of seven schools and 17 research laboratories that are part of the internationally renowned National Polytechnic Institute of Toulouse, France. For nearly 30 years, French students have come to Brookings through the summer internship program.

Most interns have done research on campus, but Schade already had a structured program in place that was well-suited to Bezault’s interests, according to economics professor Evert Van der Sluis. He and his colleague, assistant professor Kuo-Liang Chang, were Bezault’s SDSU coordinators. Bezault began her internship in June.

Learning scope of small business“To work in a small business, you have to be responsible for everything,” said Bezault, who will complete her master’s degree in agri-business marketing and communications in 2015.

For example, Bezault’s second week at Schadé had her helping harvest and process 4,700 pounds of rhubarb. “It was exciting and exhausting,” she added. “One of the goals is to teach students the whole process,” Schade explained, from tending the grapes in the vineyard to fermentation and bottling and eventually sales and delivery. “When people see a bottle of wine, they don’t think about what it takes to get the wine into the bottle.”

Nancy and husband Jim have developed a working relationship with SDSU, sponsoring paid internships and programs for credit through the hospitality program, landscape design, horticulture and small business administration/entrepreneurship programs. “It’s a way to give back to our community,” Schade said, which is part of their business philosophy.

“We ask students to challenge themselves,” Schade said. “When you own and operate a small business, there is no one to fall back on. You have to make it happen.”

The stakeholder event was the most challenging part of the internship, according to Bezault. “I decided to cook a French dinner to help our guests discover my country a little.” However, she had to work within a $100 to $120 budget.

“One of the most difficult aspects that I’ve observed for all students is working within a realistic budget for a small business,” Schade said. Bezault met that challenge through lengthy conversations with her mother to select the recipes for her 18 guests and a three-hour stint in the grocery store.

“She was very organized,” Schade said, describing a meal complete with three French appetizers and three desserts, including chocolate mousse. The July 24 event was also a chance for Bezault to gather marketing information from the stakeholders. “They like the wine, but they also like the boss,” she said. The Schades’ reputation and involvement in the business is one of the selling points for the wine.

However, these loyal customers also want a very dry wine, as opposed to the sweetness in many of the current varieties, Bezault pointed out. In addition, they suggested expanding the tasting room to provide seating for larger groups. “It’s difficult to be objective about some things because you love the business,” Schade said. “Marine brought that objective eye and helped us see some things differently.”

“Students ask the question, ‘why do you do this?’” Schade added. “That’s the perspective that we value.”

About École Nationale Supérieure Agronomique de ToulouseThe École Nationale Supérieure Agronomique de Toulouse is a Graduate School of Life Sciences and is part of the National Polytechnic Institute of Toulouse, France. INP is a public, national academic institute, funded by the French Ministry of Higher Education and Research. It specializes in Agricultural Science, Food Science, Biotechnology, Environmental Science, Sustainable Development and Management. Besides ENSAT, INP includes six other schools and 17 research laboratories, all of which are located in the Toulouse area. 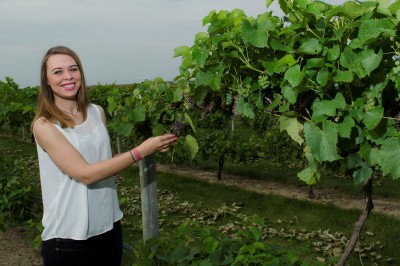 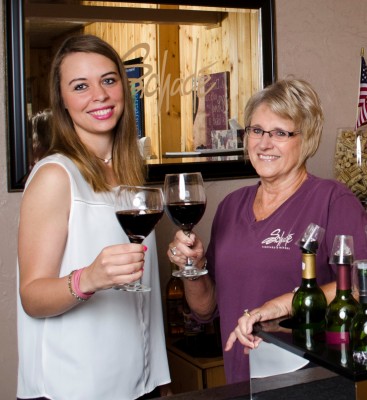 Caption: Marine Bezault of Clermont-Ferrand in central France and Nancy Schade share a toast during the last week of her internship at Schadé Vineyard and Winery near Volga.