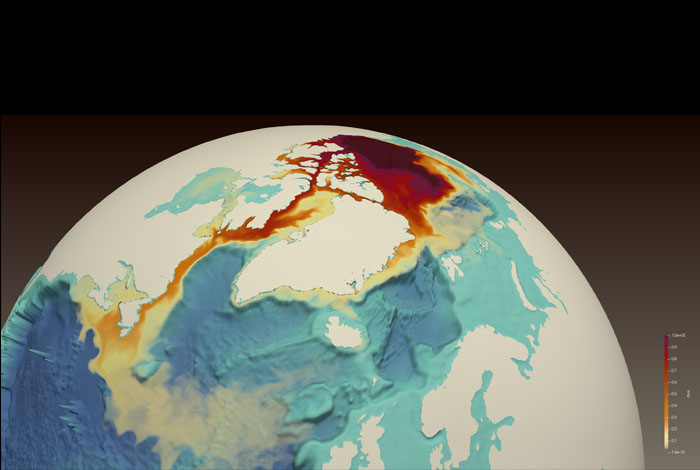 Newswise — LOS ALAMOS, N.M., February 24, 2021—The Beaufort Sea, the Arctic Ocean’s largest freshwater reservoir, has increased its freshwater content by 40 percent over the last two decades, putting global climate patterns at risk. A rapid release of this freshwater into the Atlantic Ocean could wreak havoc on the delicate climate balance that dictates global climate.

“A freshwater release of this size into the subpolar North Atlantic could impact a critical circulation pattern, called the Atlantic Meridional Overturning Circulation, which has a significant influence on northern-hemisphere climate,” said Wilbert Weijer, a Los Alamos National Laboratory author on the project.

A joint modeling study by Los Alamos researchers and collaborators from the University of Washington and NOAA dove into the mechanics surrounding this scenario. The team initially studied a previous release event that occurred between 1983 and 1995, and using virtual dye tracers and numerical modeling, the researchers simulated the ocean circulation and followed the spread of the freshwater release.

“People have already spent a lot of time studying why the Beaufort Sea freshwater has gotten so high in the past few decades,” said lead author Jiaxu Zhang, who began the work during her post-doctoral fellowship at Los Alamos National Laboratory in the Center for Nonlinear Studies. She is now at UW’s Cooperative Institute for Climate, Ocean and Ecosystem Studies. “But they rarely care where the freshwater goes, and we think that’s a much more important problem.

”The study was the most detailed and sophisticated of its kind, lending numerical insights into the decrease of salinity in specific ocean areas as well as the routes of freshwater release. The experiment unexpectedly showed that most of the freshwater reaches the North Atlantic (the Labrador Sea) through a narrow set of passages between Canada and Greenland, called the Canadian Archipelago.

The traditional view had mostly considered liquid freshwater transport in the form of sea ice via the Fram Strait (a passage between Greenland and Svalbard). The freshwater release was shown to significantly reduce the salinities in the Labrador Sea—a freshening of 0.2 practical salinity units (psu) on the western shelves and 0.4 psu locally in the Labrador Current.

However, the modeled release was based on freshwater volumes of the past, from the 1990s. Now, that volume is significantly greater, more than 23,300 cubic kilometers, owing to an unusually persistent circulation pattern called the Beaufort Gyre and to unprecedented sea ice decline. If this very large volume of freshwater is released into the North Atlantic, the impacts could be correspondingly very large as well. The exact impact is still unknown. “Our study of the previous release event offers a picture into the potential impacts of a future, larger release,” Weijer said.

“This work is a great example of Los Alamos’s innovative ocean modeling approaches; and it also demonstrates the Laboratory’s leadership in high-latitude climate science through projects such as the High-Latitude Application and Testing of Earth Systems Models (HiLAT-RASM),” Weijer said.

The funding: This research was funded by the U.S. DOE Office of Science, a LANL LDRD award, a CNLS postdoc fellowship award, and the NOAA.