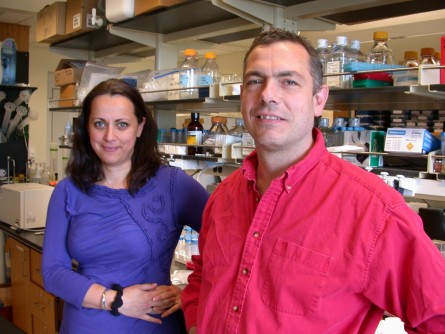 Newswise — AMHERST, Mass. – Developmental biologists Dominique Alfandari and Hélène Cousin at the University of Massachusetts Amherst recently received a five-year, $1.9 million grant from the U.S. National Institutes of Health to investigate craniofacial development in a frog model to better understand genetic control of cell migration. The work is expected to advance knowledge of how cancer cells migrate away from primary tumors to cause metastatic disease in new sites, among other processes.

Doctoral candidate Genevieve Abbruzzese in Alfandari’s lab is following up on Cousin and Alfandari’s earlier discovery of unexpected and powerful cell-regulating functions of a protease known as ADAM 13, which controls cell migration during development. It is also referred to as a metalloprotease because it requires metal to cut other proteins.

As embryologist Alfandari explains, “We’ve shown that ADAM 13 is required for cell migration, and of course every time you show how something works you get new questions about what controls it and what are its targets. There is a fundamental gap in our understanding of mechanism, how ADAM proteins control cell migration in general and cranial neural crest migration in particular. Our long-term goal is to understand how this migration is controlled in a developing embryo.”

Experiments that would take years in mice can be done in a few weeks in frog embryos. The researchers track individual cells to learn how ADAM 13 controls proteins in the cranial neural crest (CNC), which forms the jaw and face. CNC cell migration is common to all vertebrate embryos, including humans. Defects in production or migration lead to severe facial malformations such as cleft palate. This work is supported by the National Institute for Dental and Craniofacial Research at NIH.

The researchers study thousands of embryos in each experiment, serially blocking the action of individual proteins to see, using fluorescent markers, how CNC migration progresses when each is missing. Cousin is one of very few embryologists in the world who can graft small groups of cells into a host embryo, making such work possible. Alfandari explains, “Really what we’re doing is trying to diagnose a patient, that is, each cell missing a protein. We put it on a treadmill to see at what point it has heart trouble.”

ADAM 13, a protease, regulates cell functions by cutting proteins to change their actions. In their last NIH-sponsored work, Alfandari and colleagues were the first to show that ADAM 13 has two parts dominated by different proteases, one active on a cell’s outer surface, the other inside the cytoplasm.

Understanding that, they now want to learn more about how ADAM cuts a protein called Cadherin-11 (Cad-11) to control neural crest migration and second, to identify the mechanism by which the cytosplasmic domain of ADAM controls CNC migration.

Specifically, they’re testing the idea that cytoplasmic ADAM 13 controls gene expression by targeting a transcription factor to modify its function. “The Cad-11 extracellular domain has been shown to increase cancer cell invasion, thus our results will shed the light on the mechanism by which this domain operates,” they point out.

Alfandari adds that already they’ve encountered a mystery: “If you take ADAM 13 protein out of a cell while it’s in the embryo, the cells can’t migrate. The odd part is that if we remove it from cells outside an embryo, they don’t need the protein to move. This is mysterious because for most proteins, if you remove them, the cell will not be normal. This is a special quality we really want to learn more about.”

“We have progressed immensely in the last five years, but we still have a huge amount to learn, and we don’t know how far we’ve come or whether we are more than halfway there, because we don’t know all of what that protein does,” he adds. “Fortunately, there’s a high reward because anything we find can be adapted to cancer. We may learn how cancer cells migrate to invade new organs, and how to prevent it.”