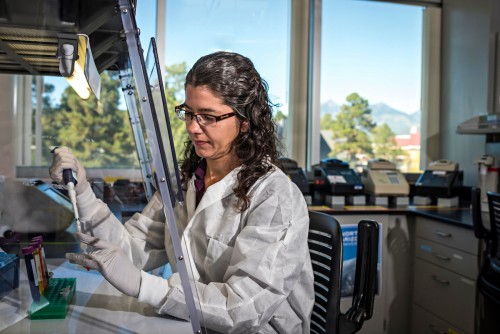 “The goals of my lab,” said NAU microbiologist Emily Cope, “are to first understand the biology of the airway and the microbiome in the context of human health and disease, and then to use that knowledge to develop new therapeutics, such as microbial therapies—prebiotics or probiotics—to help treat CRS and asthma.”

Newswise — According to the Centers for Disease Control, more than 16 percent of adults in the U.S. have been diagnosed with chronic rhinosinusitis, or CRS—commonly defined as a sinus infection and inflammation that lasts more than 12 weeks. Not only do CRS patients report a significantly worse quality of life than those with asthma, congestive heart failure and chronic back pain; the disease results in $65 billion per year in health care costs. Yet, despite the substantial socioeconomic impact of sinonasal inflammation, its underlying cause is not well understood.

Emily Cope, NAU assistant professor of microbiology and assistant director of the Pathogen and Microbiome Institute, is out to change that with her research.

“The goals of my lab,” said Cope, “are to first understand the biology of the airway and the microbiome in the context of human health and disease, and then to use that knowledge to develop new therapeutics, such as microbial therapies—prebiotics or probiotics—to help treat CRS and asthma.”

Cope is inspired to help people with CRS because it is a painful condition; she also wants to try to reduce the cost of treatment, since current treatments can be prohibitively expensive for lower-income populations. She stresses that a safe, effective microbial therapy, such as a probiotic, will need to undergo years of research, development and clinical trials before it can be widely distributed.

“We need to understand exactly which microbes are present in each case so we can understand exactly which microbes we need to replace in that system,” said Cope. “You have to be careful not to introduce the wrong microbes into the system,” she added, “which could antagonize the microbes already there and worsen infection or inflammation. You have to approach this with caution and with hard scientific evidence.”

Cope invited to contribute to journal focused on early-career scientists

Cope was recently invited by the American Society for Microbiology to contribute a paper for a special issue of mSystems focused on early-career scientists and their perspectives on the future of the field of host-microbe biology.

The editor of mSystems, Jack A. Gilbert, said, “This special issue should be considered a guidebook to some of the best and brightest early-career minds currently at work in microbial systems biology. We wanted to provide a forum to highlight what some of the incredible innovators in our community are doing and where those who embody the future of our field see their science progressing over the coming years.”

“It’s an honor to be included in this Perspectives issue,” said Cope. “It gave me an opportunity to reflect on the work we’ve done over the last 18 months as well as where we see our research going over the next five to ten years.”

Cope’s paper, “Host-Microbe Interactions in Airway Disease: toward Disease Mechanisms and Novel Therapeutic Strategies,” discusses some of the projects she’s working on and their impact on scientists’ understanding of the microbiome.

“We’re interested in how altered microbiota composition or function influences airway inflammatory diseases, chiefly CRS as well as asthma and cystic fibrosis. To study CRS,” said Cope, “we use sequencing technologies to identify which microbes are in both healthy and diseased airways and then use experimental approaches to determine what these microbes are doing. That’s what’s lacking in the field right now. We know that different microbes—in different numbers—may be present in healthy airways than in diseased airways, but we don’t know how these altered communities contribute to inflammation.”

Cope inspired by mentors at NAU and UCSF

The work Cope does is highly collaborative. She works with TGen North, collaborates with clinical partners Devyani Lal, M.D. and Matthew Rank, M.D. at the Mayo Clinic in Scottsdale and with Andrew Goldberg, M.D. and Steve Pletcher, M.D.  at the University of California San Francisco’s (UCSF) Department of Otolaryngology Head and Neck Surgery.

Cope earned a BS in Cellular and Molecular Biology as well as a PhD in Biological Sciences from NAU. It was while working on her PhD, Cope said, that she first became inspired to pursue this field.

“We started asking questions about which microbes were in the airways of patients with CRS compared to the airways of healthy patients—for example, whether we saw any differences in the microbes present in disease. I was inspired by my mentors, Jeff Leid at NAU and our collaborator Noam Cohen at the University of Pennsylvania. And that continued while I was doing my post-doc work at UCSF studying with Susan Lynch, Andrew Goldberg and Steve Pletcher. They’ve all been inspiring.”

Cope’s plans for future projects include a study of gut microbiome airway axis, moving toward a clinical study with a cohort of low-income children with asthma in the Phoenix area to determine whether fiber supplements would help treat symptoms.

“I’m interested in answering a range of basic science questions as well as the translational aspects of the work,” said Cope. “Our lab is well-poised to make the leap from basic research to translational research, applying what we learn to develop therapies that help patients.”

As she concludes in the mSystems paper, “Advances in our understanding of the microbial mechanisms that drive disease … will facilitate the development of strategies for microbiome manipulation, which holds great potential for treating a myriad of human diseases. I anticipate that the next five years will bring advances in our understanding of the ecology of airway disease through a systems biology approach.”