From Cockroaches to Parasitic Wasps, Creepy Crawlers Are for Kids

The goal of the Southwestern Branch-Entomological Society of America Youth Science Committee is to help kids get interested in science through bugs. 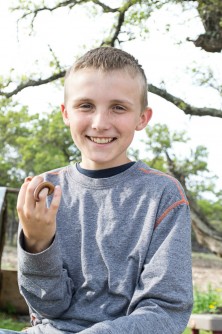 Ian Kosch of San Antonio, holding a golden desert millipede, has parlayed his interest in bugs into having camps and presentations for other children. 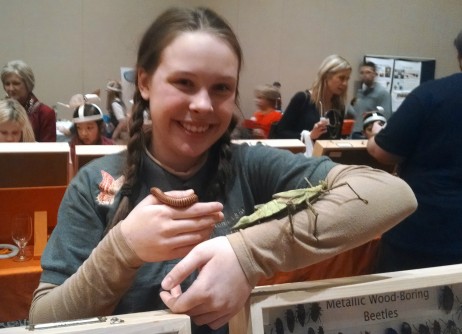 Crystal Ragains of Adair, Oklahoma, got interested in reading through her fascination with insects and now enjoys encouraging other girls to “think outside the box” in exploring the world. 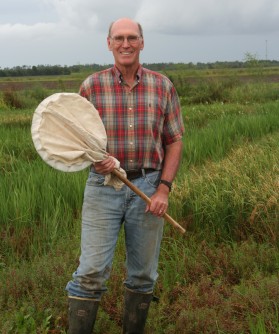 Newswise — COLLEGE STATION — A child calmly whispers all his life’s problems to the one who will listen. And in that moment, everything seems so much better.

Perhaps the listener understands. Some days it seems like a crushing blow is around every corner. After all, the one hearing this child’s woes is a bug.

“I’ve seen very disturbed children or autistic kids who could not sit still or focus, sit quietly telling an insect all their problems,” said Dr. Andrine Shufran, Insect Adventure coordinator at Oklahoma State University in Stillwater. “The magic of cockroaches.”

Introducing what others would call “creepy crawlers” to kids is one way entomologists – people who study insects – have witnessed transforming growth both personally and academically for the children they teach.

Shufran is part of the Southwestern Branch-Entomological Society of America Youth Science Committee. Their goal is to help kids get interested in science through bugs.

Camps, fairs, competitions, exhibits, classroom talks and even insect birthday parties have enlightened children across the region about “the most widespread and diverse group of organisms on earth: insects,” according to the committee members.

“I find that you can’t go wrong with kids and bugs,” said Molly Keck, AgriLife Extension entomologist in San Antonio. “It’s an easy way to get youth interested in science, the environment and being outdoors.”

One of the main events of the Youth Science Committee is Insect Expo, an annual activity-oriented learning experience for fifth graders, Way noted. There, hundreds of children learn how insects have adapted successfully over time, that the vast majority of insects are beneficial and how each insect has its niche in the ecosystem.

But comments from the kids themselves speak volumes for the lowly insects.

For Seth Fothergill of Friona, it was a praying mantis that got his attention.

“I’ve been interested in insects since the fourth or fifth grade,” said high schooler Fothergill, after a recent FFA entomology contest at West Texas A&M University in Canyon. “It’s interesting how each one is different. But my favorite is the praying mantis. I’ve always thought it was amazing to see how their forelegs work.”

Fothergill said he plans to continue his study of insects through high school and ultimately work in forestry where his knowledge of insects – both harmful and beneficial – will help.

“It’s easy to feed them, you can hold them, and they’re not poisonous,” Kusch reasoned, pointing out, however, that some people get a rash from the juice the millipede excretes from its fear of being held.

Kusch became intrigued with insects after attending a bug camp conducted by Keck. He began assisting her class and then decided to set up his own business, The Bug Adventure, to do presentations and host a camp of his own. He’s thinking about entomology for a career, “and basically just keep on doing what I’m doing now,” but also helping people learn how to live with them or get rid of the pests.

He also has some research in mind, based on having learned scientific tidbits such as how roaches can survive radiation, that the desert hairy scorpion can live for years with little water and that a tarantula’s lifespan may be decades.

Bugs were never considered as a way to encourage reluctant reader 8-year-old Crystal Ragains of Adair, Oklahoma, to pick up a book, but that is what happened on a field trip to the entomology lab at Oklahoma State.

Not only were the bugs fascinating, but in meeting the female scientist Shufran, Ragains realized that a world of opportunity awaited her as well. Shufran, not knowing of Ragains’ reluctance to read, told the young girl that reading was a must for having a career in science.

“I started reading about bugs, and now I read about everything,” said Ragains, now 16 and a fan of parasitic wasps and walking sticks.

She said delving into insects has allowed her to encourage other girls to explore “outside the box,” in learning about the world.

“Girls and bugs? Girls don’t normally like bugs, but me doing insects may inspire them to do other things that are different,” said Ragains, who often does presentations for other youths.

“Who doesn’t love bugs when they are 7 years old? We often lose that in junior high, but I have never met a young child who didn’t think bugs were cool,” she said. “Even if they say ‘Ewwww gross!,’ they are smiling while they say it.”

Pierce believes bugs are a fun way to learn about the scientific method, which she said all people should know because it’s “a process that can be a bit messy, but over time the truth becomes clear.”

“I think the general public often forgets the tremendous impact, both good and bad, that insects have on humans,” she said. “Insect pests compete with people for food and other valuable resources and cause diseases to humans and livestock. But human society could not exist without the tremendous benefits provided by insects that pollinate plants, decompose wastes and fascinate young people and many of us older ones as well. These kinds of youth activities help students learn about insects and their tremendous impact on all of us.”

Though Way has spent his career battling insect pests, such as the ever-elusive rice water weevil, the use of insects to get children excited about science makes it all beneficial.

“It’s rewarding when you see their smiles and you know you’ve made an impression on that child going in the right direction,” he said. 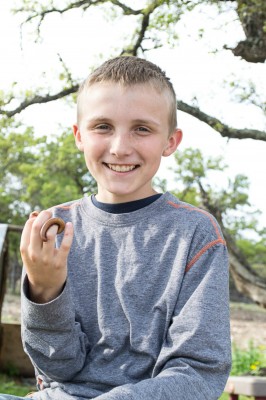 Caption: Ian Kosch of San Antonio, holding a golden desert millipede, has parlayed his interest in bugs into having camps and presentations for other children. 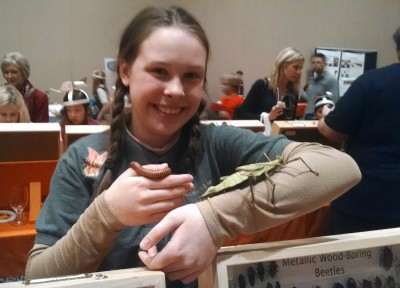 Caption: Crystal Ragains of Adair, Oklahoma, got interested in reading through her fascination with insects and now enjoys encouraging other girls to “think outside the box” in exploring the world. 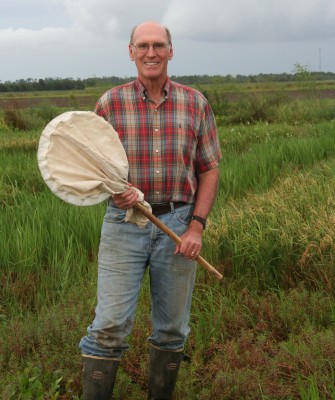